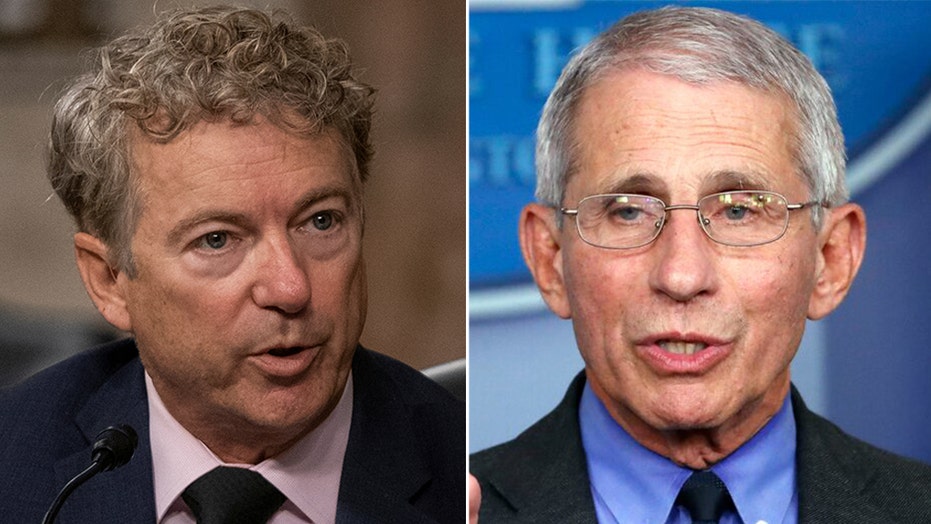 Sen. Rand Paul and Dr. Anthony Fauci found themselves in another heated exchange at Thursday’s COVID hearing in the Senate, where the Kentucky Republican accused Fauci of wearing a mask for "theater" after receiving a vaccine.

Fauci stressed that vaccines and natural immunity did not protect against COVID-19 variants.

Paul expressed frustration at the nation’s leading infectious disease expert’s prediction that Americans might need to wear masks until 2022.

Paul pointed to one study that found no symptomatic reinfections, and another that showed natural infection would prevent the vast majority of people from being hospitalized from the virus for years to come.

DR. FAUCI: IT'S 'POSSIBLE' AMERICANS MAY STILL BE WEARING MASKS IN 2022

"Here we go again with the theater, let’s get down to the facts," Fauci shot back.

"When you talk about reinfection and you don't keep in the concept of variants, that's an entirely different ballgame. That’s a good reason for a mask," he said.

Fauci pointed to a South African study by Johnson and Johnson that found those who had been infected with the "wild-type" COVID-19, meaning the original strain, had "no protection" when exposed to variants.

"I agree with you that you very likely would have protection from wild-type for at least six months," Fauci continued.

Paul said there was "no evidence" of significant reinfections of Covid-19 after infection or vaccine, adding he didn’t believe there had been any hospitalizations after the two-week period following full vaccination.

"What study has found reinfection with severe symptoms with variants? You’re making policy based on conjecture," Paul said.

"You've been vaccinated and you parade around in two masks for show," Paul continued. "You're defying everything we know about immunity by telling people to wear a mask that have been vaccinated."’

"You want to get rid of vaccine hesitancy? Tell them they can quit wearing their mask after they get a vaccine," the senator said, "instead of telling them the nanny state's going to be there for three more years and you’ve got to wear a mask forever. People don't want to hear it and there's no science behind it."

Fauci said that vaccines, developed for immunity to wild-type COVID-19, offered some "spillover immunity" to COVID variants, but that protection was diminished by anywhere from two- to eight-fold.

"We’re not dealing with a static situation for the same virus," Fauci added.

A new study by the New York Blood Center found that all three FDA-approved vaccines show efficacy against COVID-19 variants.

"Our analysis finds that there is more than enough evidence to support that the vaccines will work against mutated forms of COVID-19," the authors of the study, published in Science Magazine, wrote. They added that the efficacy of the vaccine needs to be reevaluated as new strains emerge.

However, a study by the New England Journal of Medicine found that all three vaccines showed significantly reduced efficacy against the South Africa B.1.351 variant.

The Food and Drug Administration (FDA) has told drugmakers they will need to prove the vaccine produces a strong immune response against variants.