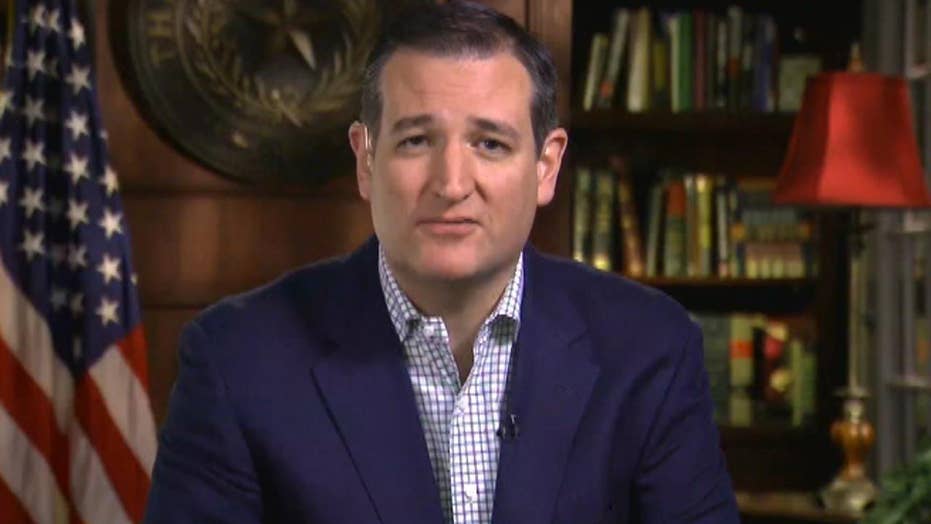 Q POLL A BIRTHDAY BOON FOR CRUZ
There’s quite a 45th birthday present for Ted Cruz in today’s Quinnipiac University national poll of Republican primary voters. The Texas Senator is up 8 points since last month’s survey and has closed the gap on frontrunner Donald Trump to just 4 points.

The poll, the first reliable national survey taken since last week’s GOP debate, shows the race substantially closer than a round of pre-debate surveys. It also reinforces that Cruz has been the major beneficiary of the deflation of Ben Carson’s brief poll surge.

And it’s no mystery why. Forty percent of Republican voters said Cruz did the best job in the debate.

The third viable competitor for the nomination, Marco Rubio, actually lost ground in the poll. It was perhaps due in part to a bump in support for New Jersey Gov. Chris Christie, who moved into fourth place with 6 points.

Jeb and the rest - Former Florida Gov. Jeb Bush, who has been Rubio’s harshest critic, remained essentially unchanged from last month at 4 percent, despite an attack-dog debate effort on Trump. It’s not a statistically significant gap with Christie, but when we look deeper, we see why this poll is not the way Bushworld wanted to close out 2015. With Bush’s continuing poor performance in Florida and his status in the Q poll as the least liked Republican in his own party and the least popular presidential candidate among both parties, this is not a rally. For Bush and everybody else: Lindsey Graham has gone ahead and is preparing a place for you…

Trump (partly) explained - For every Republican puzzling over how Trump has done so well for so long, it’s this: 70 percent of those GOP voters surveyed said that Trump “has a good chance” of winning against Hillary Clinton. Assuming that practically all of Trump’s backers believe that he is well positioned to win, that still means that more than 40 percent of the party supporting other candidates believes their frontrunner is a viable general election contender.

Trump badly trails Clinton head-to-head and hasn’t led any national head-to-head matchup with Clinton in more than a month and before that rarely did. Rubio has consistently led Clinton over the same period while Cruz has improved but continues to lag.

The latest Q Poll gives us an insight on just how bad it is.

Trump is broadly disliked in his party with the same share of voters – 28 percent – saying they would never support him as those who currently back him. Only Bush is close in the “no way” measure.

This helps us see how half of respondents overall said they would be “embarrassed” to have Trump for president. Given that just 25 percent of women overall and 15 percent of voters under 30 had favorable views of Trump, you can see that measure rocketing skyward.

Asked another way, 54 percent of Republicans said that Clinton did not have a good chance of winning the general. It was this kind of thinking four years ago that let Newt Gingrich hold leads the size of Trump’s current advantage in national polling. Republicans, wrongly believing that President Obama was an easy out, were not interested in appealing to general election voters. It would be a costly and damaging three more months before they admitted Obama would be hard to beat and buckled down.

Trump’s hard share of the GOP vote – the percentage of voters who support him and say they will not change their minds – is about 18 percent. Only when the share of voters who believe Trump is a potential general election winner is closer to that number than to the current 70 percent will the nominating process move on to the next stage.

How long that takes and how painfully and expensively that realization occurs will substantially determine the GOP’s chances in 2016.

Trump v. Cruz v. Rubio - Trump’s strongest demographic categories in the primary race remain men and those voters without college degrees. His weakest suits are with evangelical Christians and the college educated.

A substantial warning sign for Cruz is his lagging support among women. While Trump has struggled with female voters, Cruz’s gender gap is substantially larger. Cruz is essentially tied with Trump among men (29 percent and 30 percent, respectively) but Cruz drops to 19 percent among women compared to Trump’s 27 percent.

While Cruz dominates among very conservative voters, Tea Party supporters and evangelical Christians, his base is looking a little too narrow. With 12 percent of Republican women undecided, Cruz needs to make himself more appealing.

Rubio has the most consistent support across the demographic strata of any viable candidate. He polls about the same with women and men and generally across the ideological spectrum. Rubio’s only lopsidedness is on educational attainment. Rubio trails Cruz by only 2 points among the college educated and trails Trump by just 5 points in that category. But among those without college degrees, Rubio trails Trump by 21 points and Cruz by 17 points.

OBAMA, CLINTON PUMP TRUMP
In case you hadn’t noticed, President Obama and Hillary Clinton are eagerly – and strategically – stoking the fire that surrounds Donald Trump’s rhetoric and frontrunner status. First the president’s trashes Trump for ‘exploiting’ anger and fear among “blue-collar men.” Then Clinton tag-teams with the claim Trump is ISIS’s best recruiter and a soon to be feature in the jihadist group’s videos. Hillary’s claim has been panned and she has offered no evidence to support it, but her campaign went Trump-style and said “hell no” to a Trump call for an apology.

Trump, of course, loves it. The GOP frontrunner rounded on Clinton at a Monday night rally, calling her “a liar” and calling her extended bathroom break at the previous Democratic debate “disgusting.” Democrats want Trump to get all the attention, and Trump surely agrees as do, apparently, most in the media.

On the verbification of Yiddish names for genitalia - Whatever his lasting effect is on American politics, Trump’s consequence for American English is already clear. Aside from giving the rest of the country the gift of “yuge” – a phonetic spelling of a Queens’ pronunciation of “huge” meant to imply a grandiose boast – Trump has also reintroduced the archaic word “bigly.”

But his most significant addition to the American language yet may be “schlonged,” which is the verbification of a Yiddish slang word for the male sex organ. Trump said of Hillary Clinton’s 2008 primary defeat, “She was favored to win and she got schlonged.” Not likely to help Trump with the female voters among whom he suffers, but from a linguistic point of view, highly significant.

Bernie doesn’t need all that loving - WaPo: Sanders drew attention to Hillary Clinton’s line that she wants to be loved by “everybody,” including corporate America. ‘Well, I think we all want to be liked by everybody,’ Sanders told an overflow crowd [in Iowa] Monday…But, the Vermont senator said: ‘In the real world, if we’re going to transform America, if we’re going to stand up to the greed and recklessness and illegal behavior of Wall Street ... and the greed of corporate America, I accept their not liking me. ... I don’t need to be loved by everybody.’”

SOUND OFF: READERS REACT TO 2016 POWER INDEX
“In the interest of transparency in reporting the ‘Power Index’ should be renamed the ‘GOP Establishment Wishful Thinking Index’.  Sorry abut (sic) that Jeb Bush thing.” – Walter Marciniak

“The newest Fox News Poll shows Trump losing to Clinton by 11----while Rubio beats Hillary by 2.  When do Republican voters wake up? The actual ‘big loser’ in November will be Trump if  he’s the nominee--- Hillary wins easily.” – Jim Hartman

The others should all drop out..... enough is enough
JEB has just shot himself in the foot.” – Joan Shirey

NOMINEE FOR MOST CANADIAN CRIME EVER COMMITTED
Steinbach (Manitoba) Online: “Police were called to the Ste. Anne arena after spectators noticed a worker driving the Zamboni erratically during a hockey game. The ice resurfacing machine struck the rink boards, missed sections and dug grooves into the ice. According to police, the operator was uncooperative during arrest at the arena. The incident happened between the second and third periods of the bantam hockey game between the Seine River Snipers and the Southeast Blizzard. The game was called due to the rough ice conditions with the third period being played Monday night in Ste. Anne. … Ste. Anne police report that the driver will be charged with impaired driving and refusing to provide a breath sample in relation to the operation of a Zamboni.”

AND NOW A WORD FROM CHARLES…
“It wasn’t only a lie but a particular lie on the part of Hillary.  Given her history, she ought to be a little bit careful about talking about incendiary American videos that are radicalizing jihadists into attacking Americans.  She has been there before.  It’s not working.  I think she ought to quit at two.” - Charles Krauthammer on “Special Report with Bret Baier”