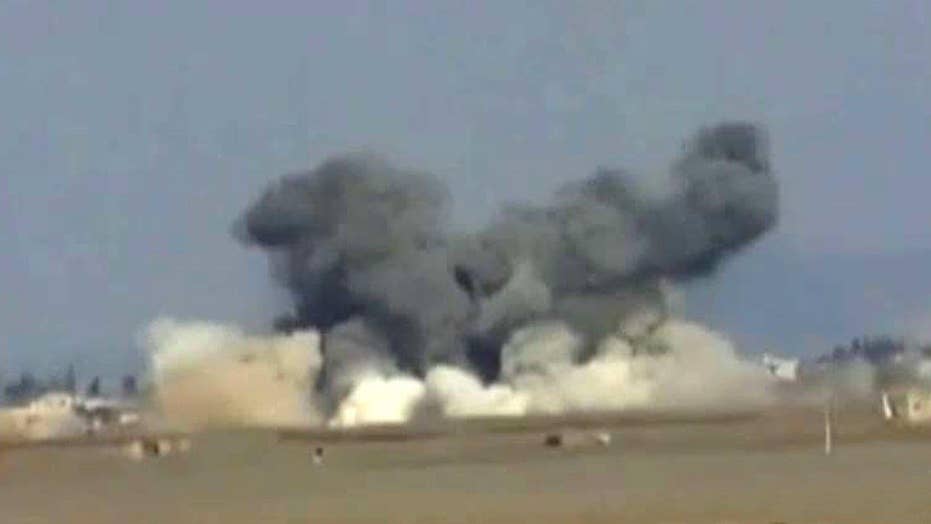 Russia seemingly has ignored Secretary of State John Kerry’s appeals to stop bombing civilians and allow critical humanitarian aid to starving Syrians – and is instead escalating its military involvement, deploying four of its most capable fighter jets to Syria, two defense officials confirmed to Fox News.

The decision to send the Su-35S jets poses yet another hurdle for Kerry’s efforts to proceed with peace talks. The Su-35S is Russia’s most advanced warplane, capable of air-to-air and air-to-ground missions, one official familiar with the jet said.

Already, continued Russian airstrikes against Syrian opposition fighters, some backed by the CIA, were enough to derail proposed peace talks in Geneva Wednesday.

Despite backing two U.N. resolutions in support of a ceasefire, Russia reneged on its promise to stop bombing civilians in Syria, a prerequisite for the U.N.-backed talks in Geneva.

Kerry said he was assured by his Russian counterpart the Russians would stop bombing.

"I talked to Foreign Minister Lavrov a couple of days ago and I specifically discussed a ceasefire with him, and he said they are prepared to have a ceasefire," Kerry said.

But Kerry’s counterpart responded the next day saying the strikes would continue.

"Russian strikes will not cease [in Syria] … I don’t see why these airstrikes should be stopped," Russian Foreign Minister Sergei Lavrov said Wednesday in Oman. Hours later, the U.N. talks fell apart.

The Russians have carried out 270 airstrikes since Monday, according to its defense ministry.

On Wednesday, a United Nations special envoy suspended the peace talks, which include participation from Russia and Iran, just hours after they began.

"It is not the end and it is not a failure of the talks,” said U.N. Special Envoy to Syria Staffan di Mistura.

The State Department denied the peace conference was a waste of time.

“It’s not a charade because they were there and because there was a beginning,” State Department spokesman John Kirby said Wednesday.

The top U.S. general in Iraq said the U.S. wants to avoid a confrontation with Russia, despite Russia bombing U.S.-backed rebels.

“I wouldn't characterize it as a proxy war. I would say that we are pursuing different goals," Lt. Gen. Sean MacFarland told reporters, speaking from Baghdad earlier this week.

Meanwhile, hundreds of thousands of Syrians are starving inside the country, besieged by Russian airstrikes preventing humanitarian aid from reaching them.

The U.N. chief humanitarian coordinator says close to 500,000 Syrians are cut off from food assistance surrounded by Bashar Assad's forces. Fifty-one people have died of hunger in Madaya, a town of 20,000, located an hour outside Damascus and just 10 miles from Lebanon and 40 miles from the Israeli border.

Aid workers who arrived with the first and only food convoy last month said they have never seen such devastation.

There are currently no plans for the U.S. military to help the U.N. get food to the hundreds of thousands trapped in Syria.

"There are no plans for that at this time,” said Col. Steve Warren, a U.S. military spokesman for the coalition based in Baghdad. “We'll, of course, support them if asked and able, but our focus is the defeat of ISIL.”

"We haven't seen a catastrophe like this since World War II," said Kerry in Rome. “[I]n recent months its people have been reduced to eating grass,” he added.

A Washington Post editorial blamed Secretary Kerry's compromise with Russia in the pursuit of peace talks, in part, for the prolonged starvation crisis: "Unfortunately, the Obama administration's handling of the Syrian crisis appears to be enabling those very war crimes."

In a statement late Wednesday, the State Department said the peace talks in Geneva were “paused” and would resume later this month.