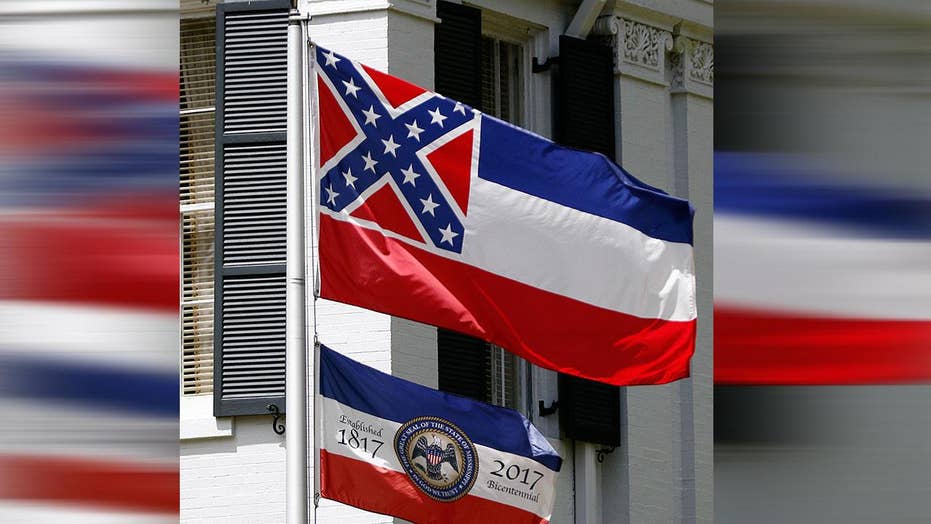 Debate over Confederate emblem on state flag heats up

Officials in Mississippi are calling on state leaders to change the state’s flag, which is the last in the nation to prominently feature, the Confederate emblem

Mississippi lawmakers are renewing calls to change the state flag, which prominently features the Confederate emblem, after violence erupted during a white supremacist rally in Charlottesville, Va., last weekend.

The Republican governor is facing pressure to convene a special session to officially order the change, and even the state's Republican senators are backing the push.

Speaker of the Mississippi House of Representatives Philip Gunn, who would preside over a possible special session, also said he supports the change.

“I want to see the flag changed. But, we must acknowledge that changing our state flag, alone, is not going to solve the problem of bigotry, hatred or racial superiority,” Gunn, a Republican, wrote in a Facebook post. “Only changes in the hearts of men are going to solve these problems.”

The push to remove Confederate statues has fueled an intense debate in cities across the country, with defenders warning of a slippery slope in taking down historical monuments deemed offensive.

But Mississippi is unique. The Magnolia State is the last in the union to prominently feature the Confederate emblem on its flag, though at least four other states use elements of the Confederate design on their flags including Arkansas, Alabama, Florida and Georgia.

“When there is a pending economic development deal, the Governor declares a special session and calls representatives and senators back to Jackson to pass legislation,” Williams-Barnes said in a press release. “Simply, there is no legislation that would do more to improve the image and economy of Mississippi than changing the flag.”

This year’s regular session for the Mississippi State Legislature ended in late March but the governor has the power to call lawmakers back to the capital for an extraordinary session.

In a statement provided to Fox News, Bryant rejected the rhetoric from last weekend but stopped short of calling a special session to change the flag.

“Those who practice the extremist ideals of Neo-Nazism or white supremacy have no place in Mississippi. I condemn these groups in the strongest possible terms,” Bryant said in a statement.

Bryant added the decision should be left up to the citizens of the state as he has previously expressed.

“My position has not changed. Whatever the state flag is or is not should be decided by Mississippi voters,” Bryant added.

The state's two GOP senators, Thad Cochran and Roger Wicker, have called on legislators to change the flag.

The debate surrounding the state flag, which has been used since 1894, has been ongoing for years. All eight public universities in the state no longer fly it on campus grounds. An attempt earlier this year to force universities to fly the flag or lose tax breaks failed in the state legislature.

In 2001, Mississippians voted to keep the state flag by 64-36 percent in a statewide referendum. Another vote for a new flag design would require over 86,000 signatures to get on the ballot and must pass with a majority vote.

Any change at the legislative level would require support from both houses and the governor’s signature. The next legislative session is scheduled to start in January 2018.