Two Senate Republicans said Sunday that President Trump must decide whether to keep Scott Pruitt as EPA administrator but sharply criticized some of Pruitt's questionable actions since joining the administration, with one even calling him a “chucklehead.”

Pruitt has been raked in recent days and weeks for a list of issues mostly related to spending -- from renting a room on Capitol Hill owned by a lobbyist to spending millions on security inside and outside of Environmental Protection Agency headquarters in Washington, D.C.

“Stop acting like a chucklehead,” Louisiana GOP Sen. John Kennedy said on CBS’ “Face the Nation.” “I don't know what the allegations about his apartment are true or not. They don't look good.

"Why do you want to rent an apartment from a lobbyist for God's sake? Stop leading with your chin. Now these are unforced errors. They are stupid. I don't mean to denigrate Mr. Pruitt, but doggone it, he represents the president of the United States. And it is hurting his boss. And it needs to stop.”

The president has so far backed Pruitt, a former Oklahoma state attorney general who has assertively delayed or rewritten Obama-era EPA regulations, which has drawn the ire of environmental activists.

One issue is Pruitt’s 20-member, full-time security detail, which is roughly three times bigger than his predecessor's and purportedly costs $3 million when including travel expenses.

“While Security spending was somewhat more than his predecessor, Scott Pruitt has received death threats because of his bold actions at EPA,” Trump tweeted Saturday. “Record clean Air & Water while saving USA Billions of Dollars. Rent was about market rate, travel expenses OK. Scott is doing a great job!”

Also this weekend, EPA spokesman Jahan Wilcox released a report by the agency’s assistant inspector general stating Pruitt and his family have faced “an unprecedented amount of death threats” and a list of several published reports about such incidents.

However, a nationwide search of state and federal court records by The Associated Press found no case in which somebody has been arrested or charged with threatening Pruitt, the wire service reported Friday.

Pruitt also has defended his use of first-class airfare, saying it was initiated following unpleasant interactions with other travelers, including one who yelled a profanity as he walked through the airport.

He also has come under scrutiny for big raises for two of his closest aides and spending to essentially spy-proof his office.

Such efforts reportedly included nearly $9,000 last year on sweeping his office for hidden listening devices and biometric locks for the doors -- and spending $43,000 for a soundproof phone booth for Pruitt's office. 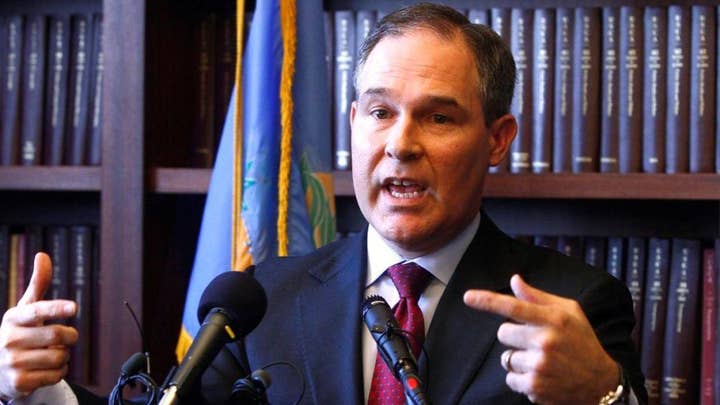 Pruitt on Wednesday defended his actions and questionable spending on the apartment and other expenses, in an exclusive Fox News interview.

At least three congressional Republicans and a chorus of Democrats have called for Pruitt's ouster.

On Sunday, Maine GOP Sen. Susan Collins told CNN's "State of the Union" that she voted against Pruitt being appointed to the EPA post and that his recent actions in the “environmental arena,” including the weakening of restrictions on lead, were “reasons enough to validate my decision to oppose his confirmation.”

She also said the “daily drip” of accusations about excessive spending and ethical violations were distractions to the agency and its mission.

Collins said Congress had no say in whether Pruitt should be fired. But she also called for congressional oversight on the issues and argued that on policy alone Pruitt was “the wrong person to head the EPA.”