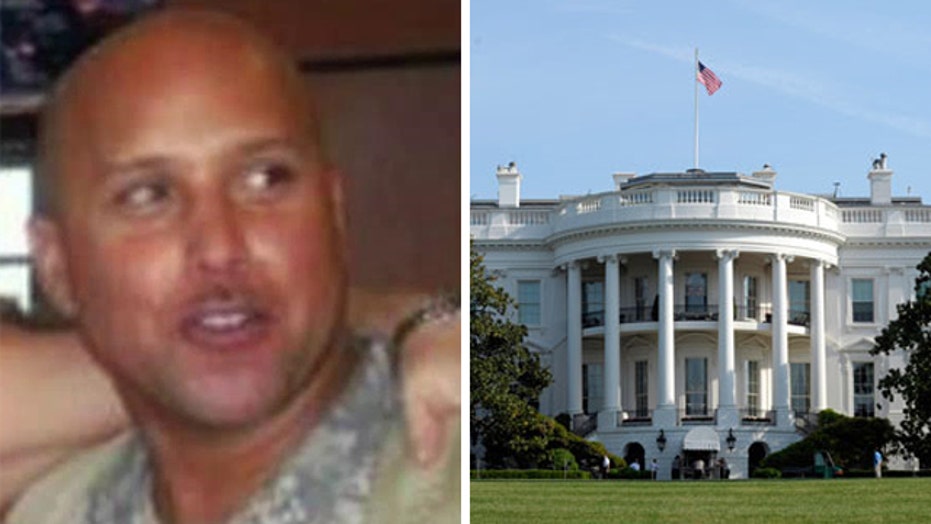 WH intruder had more than 800 rounds of ammunition in car

Judge: Jumper is flight risk and danger to President Obama

The intruder who evaded Secret Service and bolted into the White House on Friday was found with 800 rounds of ammunition in his car and had two prior run-ins with the law this year, officials said.

The details emerged during an initial court appearance for the suspect, 42-year-old Omar J. Gonzalez.

Federal prosecutor David Mudd said Gonzalez had hundreds of rounds of ammunition in his car, in addition to two hatchets and a machete, at the time of Friday's incident. He called the intruder a danger to the president.

Gonzalez, who was quiet in the courtroom, was deemed a flight risk and ordered detained until his next hearing, set for Oct. 1.

Mudd detailed two other recent incidents involving the suspect. He said Gonzalez, who is homeless, was arrested in July for evading police and was found at the time to be in possession of a sawed-off shotgun, as well as a map of the D.C. area with the White House and Masonic Temple circled.

Separately, Wythe County Deputy Commonwealth Attorney David Saliba said Gonzalez also had two powerful rifles, four handguns and other guns and ammunition in his Ford Bronco when troopers stopped him in southwestern Virginia on July 19. Saliba said Gonzalez initially tried to flee troopers, weaving and driving off the road into a highway median.  Gonzalez was arrested at the scene after a trooper found the illegal shotgun in his car. The ammunition and weapons, including a tomahawk, were seized.

Mudd detailed an Aug. 25 incident as well in which he said Gonzalez was stopped along the south fence of the White House with a hatchet. He was not arrested at the time. According to Mudd, officials searched his car but found no other weapons at the time.

The security breach this past Friday has prompted a comprehensive security review, as officials examine what happened and whether additional security changes are needed.

Homeland Security Secretary Jeh Johnson said in a statement he will "carefully evaluate" the findings but encouraged the public not to "rush to judgment" until all facts are in.

Aside from the weapons apparently found in his car after the Friday breach, officials say the suspect was also carrying a small knife when he scaled the White House fence, sprinted across the lawn and entered the building before being arrested.

In an affidavit filed with the criminal complaint, Officer Daniel Hochman said Gonzalez was caught carrying a Spyderco folding knife, with a serrated, three-and-a-half-inch blade.

According to the statement, the suspect told Secret Service "he was concerned that the atmosphere was collapsing and needed to get the information to the president of the United States so that he could get the word out to the people."

The breach led to a rare evacuation of much of the White House. President Obama and his family were headed to Camp David when the breach occurred Friday evening.

The Secret Service increased its security on Monday around the perimeter of the White House, the presidential residence and one of the government's enduring symbols, while investigating how officers had allowed the incident to happen.

Earnest said the Secret Service investigation will include a review of protective efforts both inside the White House grounds and outside the fence line along Pennsylvania Avenue, including staffing and threat assessment policies and procedures.

Gonzalez, an Army veteran from Copperas Cove, Texas, faces charges of entering a restricted building or grounds while carrying a deadly or dangerous weapon. The Army says Gonzalez served from 1997 until his discharge in 2003, and again from 2005 to December 2012, when he retired due to disability.

The Secret Service didn't open fire on Gonzalez or send attack dogs after him.

Officers who spotted Gonzalez scale the fence quickly assessed that he didn't have any weapons in his hands and wasn't wearing clothing that could conceal substantial quantities of explosives, a primary reason agents did not fire their weapons, according to a U.S. official briefed on the investigation.

The Secret Service has long tried to balance public access to the "People's House" and security of the presidential residence.

The two-block stretch of Pennsylvania Avenue in front of the White House's north gates has been closed to vehicle traffic since May 1995, when President Bill Clinton ordered the immediate closure of the road in an effort to prevent a potential car- or truck-bomb attack.

Last September a man was arrested and accused of throwing firecrackers over the fence on the north lawn, near the area where Gonzalez is accused of climbing over the barrier. The Secret Service at the time said the man with firecrackers did not pose a threat. A few weeks later a Connecticut woman set off a police chase through downtown Washington after ramming a security checkpoint near the White House. Miriam Carey, 34, was shot and killed by police near the Capitol.

In May, a man was arrested after he followed a motorcade carrying Obama's daughters through the gates into the secure area near the White House. He had a pass for the Treasury Department, which is next door to the White House and also inside the pedestrian-only security zone. A charge of unlawful entry was later dismissed.

Another man apprehended on Sept. 11 after he jumped the White House fence was charged last week in local court for unlawful entry, according to the Secret Service. He was released on Sept. 16, with his next appearance scheduled for October.

Recent incidents have only intensified the scrutiny of the Secret Service, which is struggling to rehabilitate its image following a series of allegations of misconduct by agents in recent years, including agents on Obama's protective detail.

Capitol Hill lawmakers are carefully scrutinizing the incident. The House Oversight and Government Reform Committee has scheduled a hearing on the incident for Sept. 30.

"Friday's security breach at the White House was alarming and unprecedented. I am confident Director Pierson is taking swift action to investigate the incident and increase security procedures to prevent this from occurring in the future," McCaul said in a statement.

Sources familiar with the White House procedures are questioning why there isn't an automatic locking system for such an incident. Further, the security breach is prompting some lawmakers to revisit talks about potentially pushing back the security perimeter on Capitol Hill.

Congressional leaders, though, are resistant to adding that kind of security layer.

"We could do that," said one source, when asked about extending the perimeter outside the Capitol. "But then you create a perception of a more restrictive, less accessible Capitol."

Fox News' Kara Rowland and Chad Pergram and The Associated Press contributed to this report.