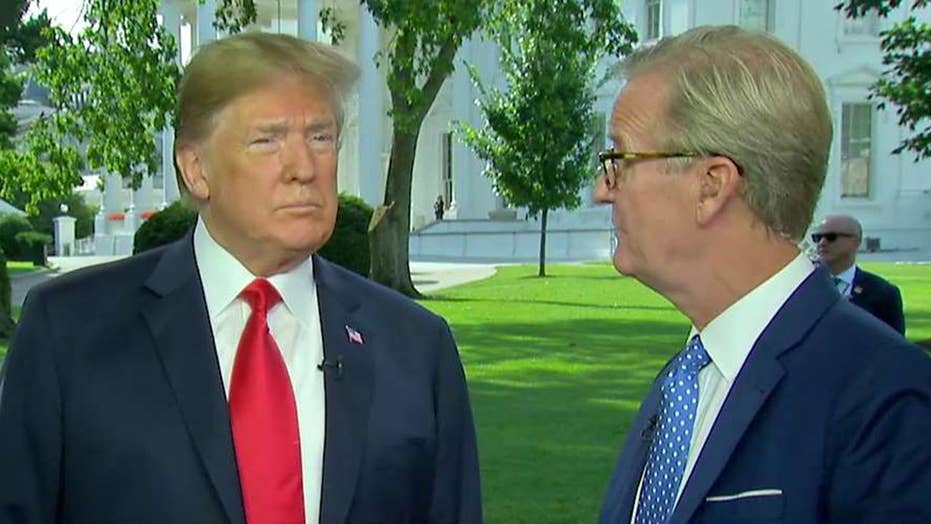 The president, in a surprise appearance on 'Fox & Friends' at the White House, reacts to the IG report's accusations against former FBI Director Comey, new China tariffs, his relationship with G7 leaders, immigration, Mueller's Russia investigation, North Korea and more.

President Trump broke his silence on the scathing inspector general's report with a vengeance Friday, first tweeting that the FBI boss he fired was the "worst" in the bureau's history, then crashing "Fox & Friends" for an impromptu interview where he ripped the "scum on top" of the Obama-era bureau and said the IG "blew it."

The president’s comments came a day after the release of the report, which was the result of an 18-month-long investigation by DOJ Inspector General Michael Horowitz. Trump said the report, which found ex-FBI Director James Comey was insubordinate, showed Trump was justified in firing him.

“The IG Report is a total disaster for Comey, his minions and sadly, the FBI," Trump tweeted early Friday. "Comey will now officially go down as the worst leader, by far, in the history of the FBI. I did a great service to the people in firing him. Good Instincts. Christopher Wray will bring it proudly back!”

In the interview with Fox's Steve Doocy, Trump made it clear he considered Comey the leader of those "minions."

"I think Comey was the ringleader of this whole den of thieves," Trump said.

Horowitz's report faulted Comey for going over the heads of his superiors, including former Attorney General Loretta Lynch, by holding a press conference to announce the FBI’s decision not to press criminal charges against Clinton. At that July, 2016 news conference, Comey called the then-presidential candidate's actions “extremely careless,” rather than “grossly negligent,” as drafted in the initial exoneration statement.

Critics have suggested that Trump's firing of Comey amounted to obstruction of justice, though Deputy Attorney General wrote a recommendation that Comey be fired. Trump reportedly told Russian officials in May, 2017 that Comey was a "real nutjob," and indicated the firing had to do with "facing great pressure because of Russia," in an apparent reference to Special Counsel Robert Mueller's investigation into alleged collusion between Moscow and the Trump campaign.

Trump later denied that his decision to fire Comey was linked to the Russia probe.

The IG report also focused on political bias within the bureau—specifically referring to FBI officials Peter Strzok and Lisa Page, who first came under scrutiny in December over a series of politically-charged, anti-Trump text messages they exchanged.

The inspector general released new text messages between the two—suggesting that they would “stop” Trump from becoming president.

“FBI Agent Peter Strzok, who headed the Clinton & Russia investigations, texted his lover Lisa Page, in the IG Report, that ‘we’ll stop’ candidate Trump from becoming President. Doesn’t get any lower than that!” Trump tweeted.

The inspector general’s office uncovered numerous messages that “appeared to mix political opinion with discussions about the MYE investigation.”

MYE, or “Midyear Exam,” was the code used in the FBI to refer to the investigation into Clinton’s private email server.

“Some of these text messages and instant messages mixed political commentary with discussions about the Midyear investigation, and raised concerns that political bias may have impacted investigative decisions,” the report read.

The report noted that it was specifically concerned about text messages exchanged between Strzok and Page that “potentially indicated or created the appearance that investigative decisions were impacted by bias or improper considerations.”

Strzok and Page, who were romantically involved, both served for a short period of time on Special Counsel Robert Mueller’s Russia investigation team. Strzok was reassigned following the revelations of his anti-Trump texts. Page resigned from the bureau last month.

But while many of those texts were made public in late 2017, the IG report revealed a new one in which Strzok vowed to "stop" Trump from becoming president -- and made clear that as many as five total FBI employees exchanged politically charged messages. "The text messages and instant messages sent by these employees included statements of hostility toward then candidate Trump and statements of support for candidate Clinton," the report said.

"I don’t know how Peter Strzok is working there anymore," Trump told Doocy.

“I find anyone who enjoys [this job] an absolute f---ing idiot. If you don’t think so, ask them one more question. Who are you voting for? I guarantee you it will be Donald Drumpf,” Agent 1 sent.

“I forgot about drumpf…that’s so sad and pathetic if they want to vote for him,” Agent 5 responded. “Someone who can’t answer a question. Someone who can’t be professional for even a second.”

“I’m trying to think of a ‘would I rather’ instead of spending time with those people,” Agent 5 sent.

Agent 5 later wrote: “I would rather have brunch with trump and a bunch of his supporters like the ones from ohio that are retarded.”

The report did not, however, find evidence connecting those political opinions held by FBI officials to decisions made in the Clinton investigation.

In a statement to Fox News, Strzok’s attorney Aitan Goelman defended Strzok’s work at the FBI.

“After a year-long investigation that included a review of millions of communications and interviews of scores of witnesses, the IG concluded that there is no evidence that the political views of Special Agent Strzok and others in the FBI impacted the handling of the Clinton email investigation,” Goelman said. “As the Report notes, Special Agent Strzok in particular was consistently thorough and aggressive, sometimes to the point that put him at odds with senior officials at the Department of Justice.”