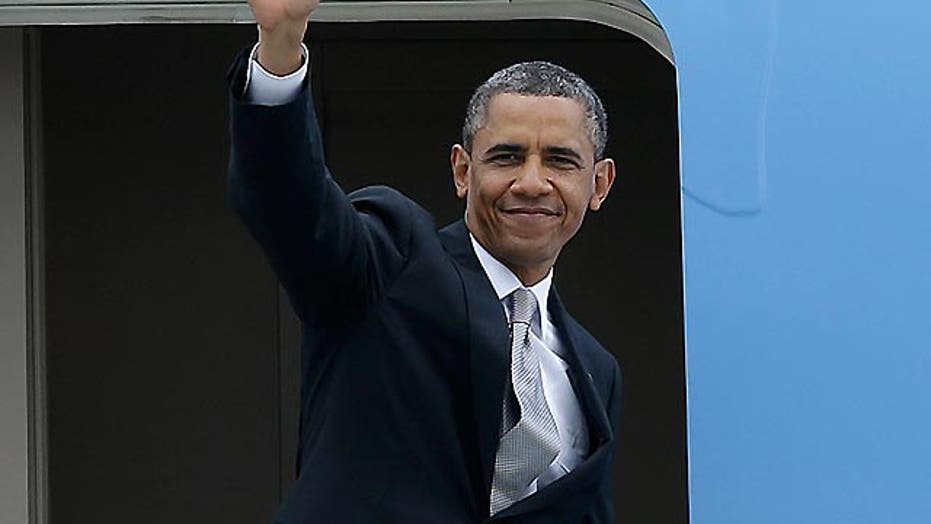 Push for Democrats in next year's campaign

WASHINGTON – President Barack Obama's budget next week will steer clear of major cuts to Medicaid, including tens of billions in reductions to the health care plan for the poor that the administration had proposed only last year.

Big cuts in the federal-state program wouldn't go over too well at a time that Health and Human Services Secretary Kathleen Sebelius is wooing financially skittish Republican governors to expand Medicaid coverage to millions who now are uninsured. That expansion in the states is critical to the success of Obama's health overhaul, which is rolling out this fall and early next year.

The president's budget is to be released next Wednesday.

Perhaps half the nearly 30 million people gaining health insurance under the law are to be covered through Medicaid. But the Supreme Court last year gave individual states the right to reject the expansion. A principal argument against the expansion in state capitals is that Washington cannot be trusted to keep its promise of generous funding for new Medicaid recipients.

In recent weeks, senior White House officials have gone out of their way to reassure activists that Medicaid will be protected in the budget.

"Since generous federal funding for the Medicaid expansion is the key inducement for governors to decide to expand their programs, the administration does not want to undermine that inducement by cutting federal Medicaid funding," said Ron Pollack, executive director of Families USA, an administration ally helping to promote new coverage benefits that take effect next year under the law.

Pollack said he has received personal assurances on Medicaid from several senior White House officials. "The Supreme Court decision last June was a game changer for the way the administration views Medicaid budgeting," he said.

White House officials aren't commenting, but Obama's budget would set up a clear contrast with the Republican-led House. The GOP budget would turn Medicaid over to the states and sharply reduce future spending from currently projected levels. It would also repeal the expansion of Medicaid, along with the rest of Obama's health care law.

As far as curbs on Medicare, the other major federal health care program, Obama seems to be searching for compromise with Republicans.

The two sides have previously floated similar proposals to raise monthly premiums for upper-middle class and wealthy retirees. There's interest in changing Medicare's copayments and deductibles in ways that would protect the sickest beneficiaries but would probably raise costs for others. And while Obama has backed away from raising the eligibility age, he does seem willing to treat new beneficiaries differently by asking them to pay more for some services.

Medicaid, the program for the poor, covers about 60 million people, roughly one in five Americans. It's a diverse population that includes many low-income youngsters and their mothers but also the frailest seniors in nursing homes. The program is different in every state. Nationally, Washington pays an average of 58 cents of every dollar in Medicaid benefits. Total Medicaid costs are well over $400 billion a year.

Under Obama's overhaul, Medicaid would be expanded to bring in low-income adults, mainly people with no children at home but also some parents. In states that accept the expansion, those making up to 138 percent of the federal poverty level — about $15,400 for an individual — would be entitled to receive Medicaid. The federal government would pay 100 percent of the expansion's cost for the first three years, starting in 2014. Washington's share would gradually phase down to 90 percent.

So far, 20 mostly Democratic states plus Washington, D.C., have said they plan to take the expansion. Thirteen Republican governors have flatly rejected it. And an additional 17 states are weighing options, with some actively negotiating with Sebelius to see if the new enrollees can be covered through private plans.

Two budget proposals previously pushed by the administration were seen as threats by states. One idea would have allowed Washington to more easily dial its share of Medicaid costs up and down. Another would have curbed an arcane, though widely used, practice through which states "tax" medical service providers, only to return the money to them while drawing more federal matching funds.

The administration had already retreated on the idea of a new mechanism for dialing down reimbursement rates, and Pollack said curbs on provider taxes are also out.

James Capretta, a health policy expert at the socially conservative Ethics and Public Policy Center in Washington, said he doubts the administration's Medicaid budget strategy will convince many governors hardened by a long tug-of-war with the feds over the program. But at least it won't aggravate matters for Obama.

"There's no doubt that as a tactical matter they've thought about this," Capretta said. "They'd rather not create another headache with governors at this point in time."