Piles of debris awaited cleanup at an "Occupy ICE" camp in Portland, Ore., after police cleared out protesters earlier this week. (KPTV-TV/FOX 12)

City officials in Portland, Ore., say they'll be cleaning up the “disgusting” Occupy ICE camp after police cleared the area of protesters Wednesday.

The mayor’s office said it would pick up a portion of the tab for the clean-up, FOX 12 reported. Meanwhile, the Portland Police Bureau has cordoned off the site, calling it a biohazard.

Activists set up the camp near the local office of U.S. Immigration and Customs Enforcement after an outcry over the agency's crackdown on illegal immigrants. 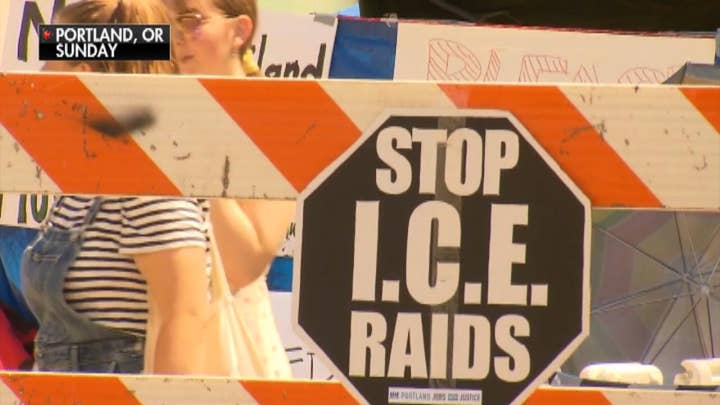 The protesters advocated abolishing the agency, an objective that is increasingly being embraced by top mainstream Democrats in Congress, including U.S. Sens. Kirsten Gillibrand of New York and Elizabeth Warren of Massachusetts.

DEMOCRATS CALLING FOR ICE TO BE ABOLISHED INCLUDE KIRSTEN GILLIBRAND, ELIZABETH WARREN AND OTHERS

“It was pretty disgusting that that’s how they were living back there,” Frank Savage, a Portland resident who lives near the camp, told the outlet.

“It was pretty disgusting that that’s how they were living back there. Getting tired of waking up to the bullhorn and the sounds and the cussing.”

He said that the area was littered by the protesters but is now relieved that things will go back to normal. “Getting tired of waking up to the bullhorn and the sounds and the cussing,” he added.

Mayor Ted Wheeler publicly ordered the Occupy ICE protesters to leave the camp Monday, but they ignored the mayor’s request.

That prompted Portland police to step in and clear the protesters. No tickets or arrests were made in the process.

“For the most part everything was done with very little incident,” police Chief Danielle Outlaw said.

This was the second time authorities had to intervene to disperse the protesters in Portland who set up camps. Last month, Homeland Security police had to clear out activists who occupied an ICE building in the city in protest of President Trump’s zero-tolerance policy toward immigration and the separation of migrant children from their parents.

As officers were clearing up the building, protesters were heard chanting “No racist police!” and some activists were pointing in each of the officers’ faces and calling them “Nazis.”

The city is having contractors clean up the mess left by the activists. The efforts will also receive help from Multnomah County inmates, who will receive work-time credit and other financial incentives, the sheriff’s office reportedly said.

The camp was set up on land owned by the city and TriMet, a public agency in charge of the public transit system in Portland’s metropolitan area.

A TriMet official said they don’t know why the protesters who started the camp can’t be held accountable for the costs associated with cleaning the area.

“I can’t answer that. I just don’t think there is a mechanism to reimburse for the cost,” the official told FOX 12.

The city doesn’t yet have an estimate of the total cost of the cleanup.