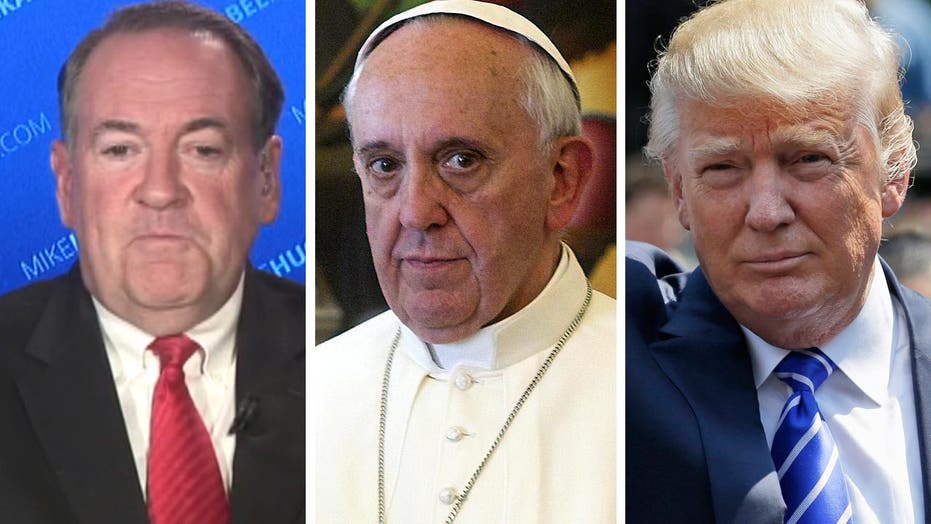 Huckabee: Unprecedented for a pope to weigh in on election

Former GOP 2016 hopeful Mike Huckabee goes 'On the Record' on the war of words between Donald Trump and Pope Francis on illegal immigration, wondering why the pontiff singled out 'The Donald'

Just when it seemed the 2016 presidential race could not get any stranger, it took another sharp turn on Thursday as Pope Francis questioned Donald Trump’s Christian faith during a flight home from Mexico – and the GOP candidate fired back, calling the pope's comments “disgraceful.”

And this is one campaign-trail dispute the White House isn’t touching. Asked to weigh in Thursday, White House Press Secretary Josh Earnest directed any questions to the pope’s spokesman.

The pope, responding earlier in the day to a question aboard the papal plane about Trump’s promise to build a U.S.-Mexico border wall, had said: "A person who thinks only about building walls, wherever they may be, and not building bridges, is not Christian. This is not in the Gospel."

Trump immediately responded: “For a religious leader to question a person’s faith is disgraceful,” he said.

Pope Francis weighed in just hours after he prayed at the Mexico-U.S. border for migrants who died trying to reach the United States. The pope did not definitively say Trump is not a Christian. Not having heard Trump's border plans independently, Francis said he'd "give him the benefit of the doubt."

But he said: "I'd just say that this man is not Christian if he said it this way."

The comments dramatically escalated what had been an otherwise cordial dispute between the two in recent days over immigration policy.

Trump said in response he is a “proud” Christian and accused the Mexican government of using the pontiff for its own purposes.

“The pope only heard one side of the story -- he didn’t see the crime, the drug trafficking and the negative economic impact the current policies have on the United States. He doesn’t see how Mexican leadership is outsmarting President Obama and our leadership in every aspect of negotiation,” he said. “…They are using the pope as a pawn and they should be ashamed of themselves for doing so, especially when so many lives are involved and when illegal immigration is so rampant.”

Trump also said that “if and when the Vatican is attacked by ISIS … I can promise you that the Pope would have only wished and prayed that Donald Trump would have been president because this would not have happened.”

Trump has had heated and high-profile feuds with several of his GOP rivals on the primary campaign trail, including Ted Cruz, Jeb Bush and former candidate Rand Paul.

But the fight with the Vatican is something entirely different.

It started on a more subdued note. Last week, Trump told Fox Business Network that he did not believe Pope Francis understood what he called "the danger of the open border we have with Mexico."

The Vatican responded through a spokesman at the time, saying, "The pope always talks about migration problems all around the world, of the duties we have to solve these problems in a humane manner, of hosting those who come from other countries in search of a life of dignity and peace."

Trump has repeatedly vowed to build a wall along the entire border with Mexico – and make Mexico pay for it. All along, he's made combating illegal immigration a centerpiece of his presidential campaign, claiming credit for kickstarting the debate which now features heavily in the GOP primary race.

The back-and-forth has drawn comments from some Christian conservatives who think the Pope should have stayed out of the political fray.

"Being a Catholic myself - and I've earned that identity going to Catholic high school and college - my whole training is learning in Catholicism - I am very disappointed in the Pope coming out against Donald Trump," said actor John Voight in a text to Fox News Thursday.

"Men or the cloth should not get involved in political campaigns," he added.

"If he's concerned about all our illegal aliens,
let the Vatican take in a few million. They're as rich as any city in the world, and then His Holiness can take care of them."