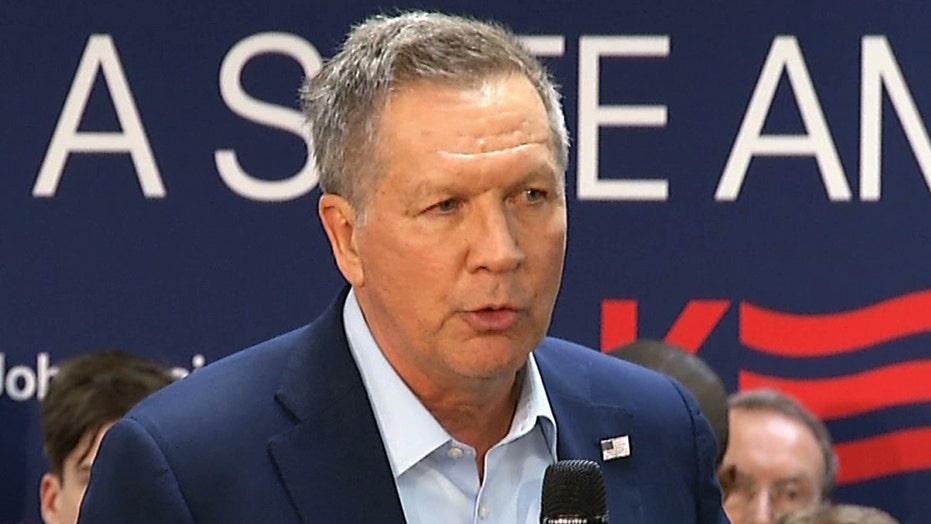 Kasich: 'I don't know if my purpose is to be president'

While GOP front-runner Donald Trump is out touting his numbers in Ohio, a fresh poll released Wednesday indicates primary rival and the state’s governor, John Kasich, has a better shot at beating the eventual Democratic nominee in the key swing state come November.

Trump also leads in a head-to-head matchup with Clinton, but just by 2 percentage points, 44-to-42 percent, according to the poll.

Kasich has persevered in the bruising 2016 GOP primary battle, now among the five remaining candidates from the early field of 17. However, he has yet to win a primary or caucus and continues to poll at about 10 percent nationally.

The governor has dismissed suggestions he quit the race to allow the Washington establishment to coalesce around Marco Rubio or even Ted Cruz in a bid to take on Trump. His strategy appears to be to survive long enough to get to Ohio and win the state’s March 15 primary, then potentially surge.

“The last thing I worry about is how we’re going to do in Ohio,” Kasich told reporters Tuesday in Georgia. “We’re going to win Ohio.”

The Quinnipiac poll shows Rubio and Cruz also ahead of Clinton in a hypothetical match-up, by 3 and 5 percentage points, respectively, in Ohio.

“The four leading Republican candidates either tie or lead former Secretary Clinton in Ohio, considered the best microcosm of the national electorate and a must-win for the GOP,” Peter A. Brown, assistant director of the Quinnipiac University Poll, said in a statement.

Still, the Ohio primary itself may be far from a shoo-in for Kasich, a popular and moderate Republican governor.

Republicans have not won Ohio in a general election since 2004, with nominee and eventual President George W. Bush.

“I think I’m going to do fantastic in Ohio,” Trump recently told Fox News. “I just think we’re going to win a lot of states that frankly Republicans are not used to winning.”