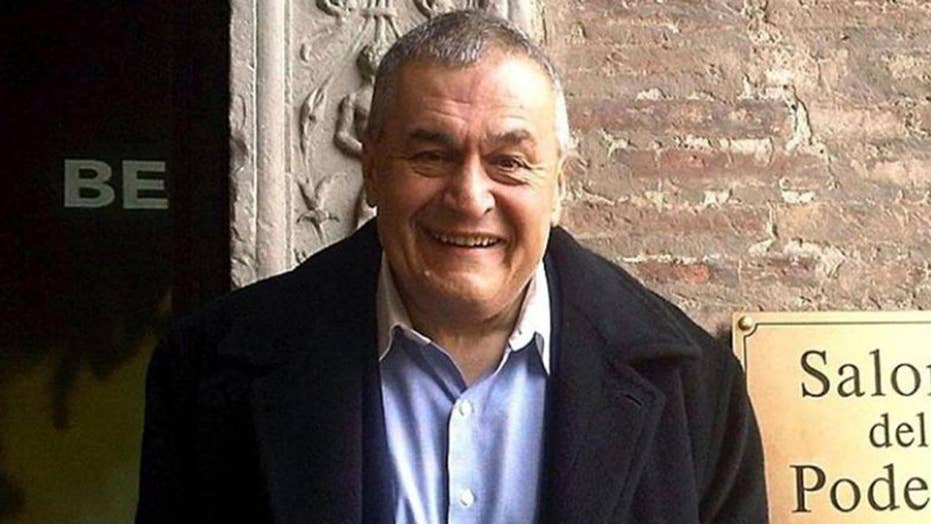 Podesta stepping down from lobbying firm amid Mueller probe

Tony Podesta reportedly tells his staff he will fight the allegations; reaction from Rep. Doug Collins, vice chair of the House Republican Conference and a member of the Judiciary Committee.

One of the most powerful Democrat-linked families on K Street fought back Tuesday against the White House, Special Counsel Robert Mueller's Russian investigation and even Fox News for reporting on the spiraling probe.

The powerful Podesta family's troubles came into view Monday with lobbyist Tony Podesta’s mysterious resignation from his firm. That raised concerns that the brother of Hillary Clinton’s campaign manager, John Podesta, might know more than he’s letting on about Russian meddling in the 2016 presidential election.

On Tuesday, Trump tweeted, “The biggest story yesterday, the one that has the Dems in a dither, is Podesta running from his firm. What he know(s) about Crooked Dems is earth shattering. He and his brother could Drain The Swamp, which would be yet another campaign promise fulfilled. Fake News weak!”

Trump did not say what specifically he thinks Podesta knows or how it affects the special prosecutor’s case.

He added, “@realDonaldTrump seems a lot more worried now than July 2016 when he asked the Russians to hack our campaign.”

Big brother Tony Podesta has been a pivotal figure in DC, where he has made a fortune off lobbying efforts. He and his former wife, Heather Podesta, were well known around town for hosting fancy fundraisers for high-rolling Democratic clients in their home.

Manafort and Gates pleaded not guilty to a 12-count indictment. Charges ranged from conspiracy against the United States to failure to file reports of foreign banks and financial accounts.

The indictment described Manafort’s efforts to hide his lobbying tactics and money be made on behalf of the Party of the Regions.

The Party of the Regions is a pro-Kremlin political base for Ukraine’s former President Viktor Yanukovych, who fled to Russia three years ago.

Manafort allegedly enlisted the help of The Podesta Group, which did work for a group known as the European Centre for a Modern Ukraine.

The special counsel probe and Russia “hoax,” as the president has described it, has cast a cloud over the Trump administration. But last week, the White House enjoyed a shift in focus, amid new revelations in the controversial Obama-era Uranium One deal and the payments behind the salacious anti-Trump dossier.

In a Monday email to his staff, Podesta said he was stepping down because he "needs to fight this as an individual, but doesn't want the firm to fight it," a person familiar with the farewell speech said.

Dubbed one of DC’s “50 heavy lifters” by the Financial Times and one of “Washington’s biggest players” by The New York Times, Podesta turned his once-modest lobbying firm into a DC heavy hitter.

But in the wake of the Mueller investigation the Podesta Group has struggled.

“Tony Podesta resigned as head of his company,” Carlson said on his tv show. “His excuse? Us. That’s right. He blamed us.”

Last week, Carlson said the Podesta brothers were “central figures” in the federal investigation. Carlson also reported that Manafort’s company, the European Center for a Modern Ukraine, was a major client of the Podesta group.