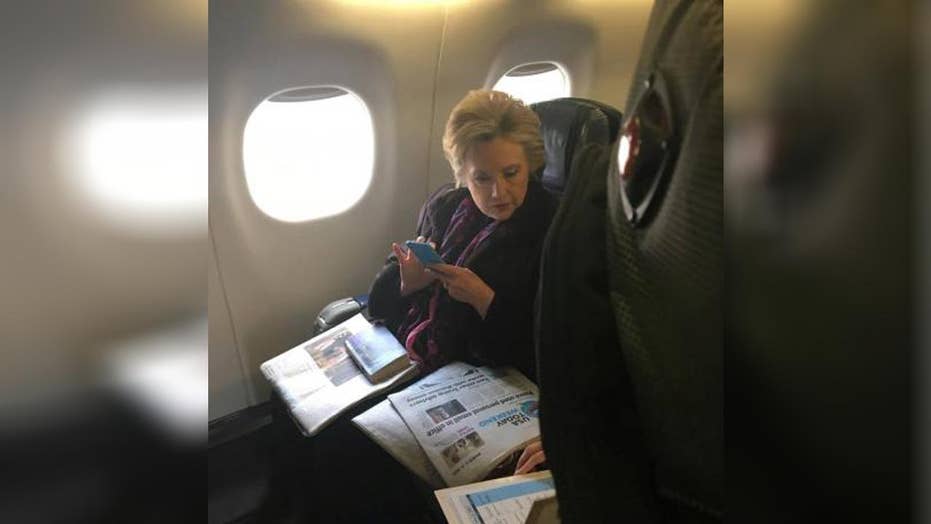 Hillary Clinton, whose 2016 White House bid was set back by an email controversy, was seen in a photograph taken Friday intently looking at a newspaper story about Vice President Pence’s email issues.

Clinton while sitting in an airplane appears to be looking at a front-page story in USA Today about Pence’s controversy. The photographer is reportedly a woman named Caitlin Quigley who was on the same Boston-to-New York flight.

Clinton, a Democrat, was the subject of several investigations during her White House bid about her use of private email servers to send and receive official State Department information, while running the agency.

An FBI investigation concluded that Clinton’s actions as secretary of State were “extremely careless” but not criminal.

However, the probes, including Clinton testifying before Congress and giving a FBI deposition, appeared to hurt her credibility with voters.

Pence’s issues are related to his time as Indian governor.

On Thursday, attorneys for the vice president turned over 13 boxes of emails from his time as governor, according to The Indianapolis Star.

Pence spokesman Marc Lotter said the emails are from government accounts and from Pence's private email account used for government business. That account was disclosed Thursday.

He also said that Pence's attorneys tried to deliver boxes of emails on Jan. 9, Pence's last day as governor. But there was a "lack of clarity" in state government about what to do with them, Lotter also said.

“I am very confident our email practices were in compliance with Indiana’s laws,” Pence told reporters Friday in Wisconsin.

He also there is “no comparison whatsoever” between his situation and Clinton’s, considering she “mishandled classified information” and “destroyed” emails requested by members of Congress and other officials.