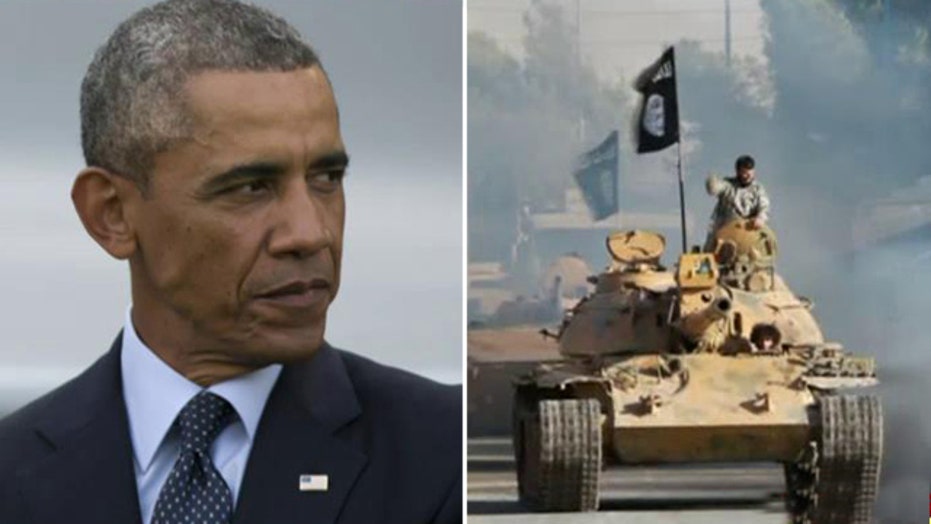 McCaul: WH ISIS strategy not a 'serious attempt to win'

Despite the fall of Ramadi to the Islamic State, the Pentagon has not been asked by the White House to conduct a wholesale review of the strategy to defeat ISIS, multiple defense officials told Fox News.

"Why would there be? It was one battle," one official said. A separate official said the Pentagon "continuously" reviews its strategy and said a major review was "not necessary."

A senior military official confirmed that the Obama administration is looking into arming Sunni tribes to help retake Ramadi, taking a page from the "Anbar Awakening" when 30 tribes united in 2006 to defeat Al Qaeda in Iraq with support from the U.S. military.

But multiple defense officials said these arms would not go to the Sunni tribes directly.

"I don't see that happening, everything goes through Baghdad," a defense official told Fox News.

A defense official in the Pentagon with knowledge of the talks at the White House Tuesday characterized the meeting as "tactical, not strategic."

"The real question is what are the Iraqis going to do differently?" a senior military official told Fox News.

"We are confident that we have the right strategy," Ryder said. "Momentum will continue to be on our side."

Pentagon officials confirmed that one immediate result of ISIS' victory in Ramadi is a delay in the operation to retake Mosul, Iraq's second-largest city. "That is going to take place in the fall, at the least," according to one official.

In February, the U.S. Central Command announced that an operation involving some 25,000 Iraqi troops would take place in the April-May timeframe.

At the White House daily press briefing Tuesday, spokesman Josh Earnest mentioned Tikrit six times as an example of the U.S.-led coalition's successes against ISIS. On Wednesday, a Pentagon official said that Tikrit, despite being rid of ISIS fighters, remains largely deserted with many unexploded booby-traps remaining.

Meanwhile, many uniformed members of the U.S. military are furious about the loss of Ramadi to the Islamic State.

"It turns out the JV team is the Iraqi Army, not ISIS," said a U.S. military officer, in reference to Obama's remark in January 2014 about ISIS being a "JV team."

"I was there for the Anbar awakening, and to lose this city is heartbreaking, knowing all those soldiers, sailors and Marines who fought there and died in vain," said a veteran special operations soldier currently deployed at an undisclosed location.

"If our country wants to be led by sheep instead of lions, then so be it," he said.