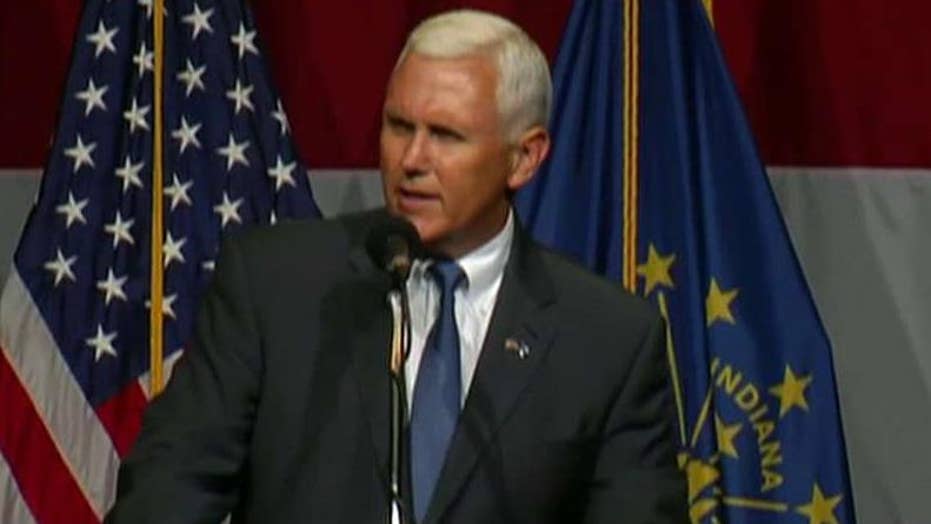 On the roster: Pence... But why? - Horrible weeks leave Hillary behind in key states - Republicans build Trump’s wall into their platform - Audible: Do as we say… - Su-bear-ruined

PENCE... BUT WHY?
Donald Trump says he’s not looking for any surprises with his selection of a running mate by the end of this week.

With a visit by Trump and his children, to Pence at the governor’s mansion in Indianapolis today, speculation was swirling wildly that the snowy thatched Hoosier was the one.

But then again, news Tuesday that Gingrich was taking a time out from his Fox News contributorship stoked speculation of equal certitude just a day before. Along with news that he too would be meeting with the Trump family in Indiana today.

There’s been little speculation surrounding Christie, perhaps given the unlikeliness of him as a running mate considering the lingering presence of criminal probes into his administration in Trenton. Though maybe he gets his day of crazy speculation on Thursday.

But, to play Washington’s favorite parlor game, let’s assume that Pence is about to become Trump’s celebrity apprentice. Certainly, the fawning adulation Pence showed to Trump at a Tuesday night rally indicates he’s eager for the post.

As the Trumps try to feel out the Republican Party, they must assume that Pence is the kind of religious conservative who could help Trump heal the wounds rent by Trump himself and the eventual victor’s ugly fight with evangelical favorite Ted Cruz in the spring.

It might have once been so. But Pence’s botched handling of a religious liberty law in Indiana last year – in which he managed to offend all sides by turns – wiped out Pence’s status as an avatar of the religious right.

Pence reflects some very conventional thinking for the Trump family. In balancing out the ticket with a career politician, values voting, traditional Republican, the Trumps would be playing the game as it has been played for generations.

That will certainly help the cash flow from wealthy donors who want Trump to normalize, but it would hardly help with the voters Trump needs.

Given the deep mistrust religious liberty stalwarts feel for Pence, his chances to bind up the wounds of the GOP seem slight. And as for the voters Trump needs the most – independents and crossover Democrats – Pence is a thoroughgoing disaster.

He is exactly the kind of Republicans that non-Republicans have come to detest over the past 30 years. Yes, he undercuts Trump on key issue areas like foreign policy and trade, but most importantly on an attitudinal shift that was the singular blessing of Trumpism for the GOP.

Whatever Gingrich’s baggage – and it is not inconsiderable – and potential liabilities he at least represents reinforcing Trump’s best brand: The disruptor.

TIME OUT
On this day in 1965, The Beach Boys released their single “California Girls,” but the story of the summertime hit isn’t so sunny. It’s actually a serious look into mental illness. LAT: “It was late at night and Brian Wilson, who had just taken LSD for the first time, was in the bedroom of his Hollywood apartment with a pillow over his head. He was stricken. He had images of his mother and his father in his mind and, most of all, fear…‘I was thinking about the music from cowboy movies. And I sat down and started playing it, bum-buhdeeda, bum-buhdeeda. I did that for about an hour. I got these chords going. Then I got this melody, it came pretty fast after that. And the rest was history, right?’…Wilson, then 22, kept working the keyboard and, turning his thoughts to fashion magazines, he came up with one of the most famous opening lines in pop music.”

HORRIBLE WEEKS LEAVE HILLARY BEHIND IN KEY STATES
Hillary Clinton could look at the latest round of swing state polls from Quinnipiac University a couple of different ways.

On the one hand, she finds herself in essentially a tie with de facto Republican nominee Donald Trump in Ohio, Florida and Pennsylvania. Given the structural advantages that Clinton enjoys and the durable lead she has held nationally all year it should be troubling for her.

A century’s worth of political history tells us that losing Ohio and Florida means losing the presidency. The winning candidate will almost certainly win at least two of these three states, all three of which President Obama won in both 2008 and 2012.

On the other hand, though, Clinton could also say that after what will be probably the worst two weeks of her candidacy, she’s not actually trailing – at least in a statistically significant sense – in any of the states.

First, her husband got caught chatting up the attorney general amid a criminal probe into Clinton’s mishandling of state secrets. Then, the director of the FBI spent two full days of exhaustive media coverage telling American voters, in essence, that Clinton had lied to them repeatedly about her security lapses and was also not sophisticated enough to understand how the system works.

Taken in that light, Clinton’s slippage looks less dire. In an odd way, it is even good for her that the tight races are a result of her diminished numbers more than they are due to substantial gains for Trump.

Trump seeks to block testimony in Trump University case - AP: “A federal judge who has been a target of Donald Trump's unending scorn must decide whether to release videos of the presumed Republican presidential nominee testifying in a lawsuit about the now-defunct Trump University — images that Trump’s attorneys worry will be used to tarnish the campaign. U.S. District Judge Gonzalo Curiel faces Trump's attorneys Wednesday for the first time since he permitted the release of unrelated documents in a class-action lawsuit alleging fraud…The big battle is over video, which Trump's attorneys don't want to see sliced and diced in campaign attack ads.”

Republicans build Trump’s wall into their platform - Fox News: “The Republican platform committee included language calling for a border wall along the U.S. and Mexican border in the draft party platform, getting behind one of presumptive presidential nominee Donald Trump's keystone proposals. The group wrapped up drafting the plan Tuesday in Cleveland in advance of the convention there next week, when the platform will officially be voted on by the full convention's 2,472 delegates. The proposae platform will express support for a ‘border wall’ that must cover ‘the entirety of the Southern Border and must be sufficient to stop both vehicular and pedestrian traffic.’”

Giuliani to speak at RNC - Politico

AUDIBLE: DO AS WE SAY…
“Canon 5 of the judicial code says that judges cannot make statements of this kind in opposition to political candidates. Now, the way these justices get around that is they claim that those rules of ethics only apply to lesser jurists.” – George Washington University Law Professor Jonathan Turley reacting on Tuesday’s “The Kelly File” to Justice Ruth Bader Ginsburg’s negative comments about Donald Trump.

FROM THE BLEACHERS
“I must correct you on the 12th Amendment procedures for electing the Vice-President in case no candidate receives a majority of the votes.  It is the Senate, and not the House of Representatives, that elects the Vice-President with each Senator getting a vote.” – John Zapatka, Phoenix, Ariz.

SU-BEAR-RUINED
Denver Post: “Jefferson County [Colo.]sheriff’s deputies freed a bear Tuesday morning from a Subaru near the Chief Hosa campground after the bruin apparently entered the unlocked vehicle, only to trap itself inside. The encounter, about 9 a.m., was captured on cell phone video. The car’s windows were all closed at the time. Mark Techmeyer, spokesman for the sheriff’s office, said the interior of the car — as shown in the recording — was totally destroyed. The two deputies who responded tried initially to free the medium-sized bear with a remote trunk opener, but when that didn’t work, one freed the animal while the other stood by with a shotgun…Authorities say they could tell by all the moisture on the windows in the car that the bear had clearly been inside for a while. Given the size of the bruin, investigators also wondered if there was a mama bear nearby.”