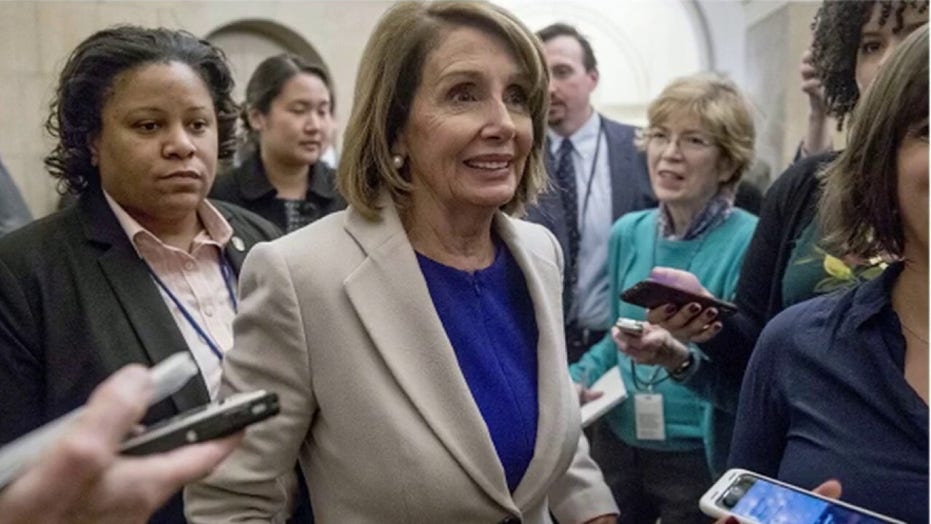 House Speaker Nancy Pelosi introduced her own emergency coronavirus stimulus bill on Monday, leading furious Republicans to argue that much of the proposal contained a progressive wishlist seemingly unrelated to the crisis -- including several provisions that amount to a resurrection of the notorious "Obamaphone" program, GOP officials said.

The bill proposed by Pelosi, D-Calif., additionally seeks to eliminate debt held by the U.S. Postal Service, require same-day voter registration, pay off $10,000 in student debt per person, mandate that airlines reduce their overall carbon emissions by 50 percent by 2050, and force federal agencies to explain to Congress how they are increasing their usage of "minority banks."

And, the legislation would provide for the automatic extension of nonimmigrant visas and restrict colleges from providing information about citizenship status. It would also allocate $35 million to the John F. Kennedy Center for the Performing Arts.

"People are dying and all Nancy Pelosi and Democrats can focus on is ripping off the American taxpayer to help pay for their liberal wish list of government handouts," National Republican Congressional Committee (NRCC) spokesman Michael McAdams said in a statement.

The NRCC went on to accuse Pelosi of cramming the bill "full of unrelated liberal goodies, including a return of the 'Obamaphone.'" Pelosi, the NRCC pointed out, wants $1 billion "to build on program expanded by President Obama that provides discounted phone service for low-income consumers."

That was an apparent reference to Title III, Section 301 of Pelosi's bill, which allocates $1 billion and calls for federal authorities to immediately expand the "emergency lifeline broadband benefit" for every household that contains at least one "qualifying low-income consumer." The bill refers to the Code of Federal Regulations (CFR) to define the broadband benefit.

Title 47, Section 8.1(b) of the CFR defines "broadband internet access service" as including cell phones, saying it is any "mass-market retail service by wire or radio that provides the capability to transmit data to and receive data from all or substantially all internet endpoints, including any capabilities that are incidental to and enable the operation of the communications service."

A comprehensive 2017 report from the nonpartisan Government Accountability Office (GAO) found that that the "Obamaphone" program, which gave cell phones to poor people under the broadband benefit, stashed $9 billion in private bank accounts and was "rife with fraud," the Washington Times reported at the time.

The program -- officially known as the Lifeline Program and run by the Federal Communications Commission -- predated President Obama but received attention during his time in office when recipients began to associate the free phone with other benefits given to the poor.

Former Missouri Sen. Claire McCaskill, a Democrat who called for the GAO report, blasted the "Obamaphone" program for lack of oversight.

“A complete lack of oversight is causing this program to fail the American taxpayer — everything that could go wrong is going wrong,” McCaskill said. “We’re currently letting phone companies cash a government check every month with little more than the honor system to hold them accountable, and that simply can’t continue."

The GAO report found that about 10.6 million people have an Obamaphone, but 36 percent of them may not qualify. The audit also concluded that more than 5,500 people were found to be enrolled for two phones, while the program was paying for about 6,400 phones for persons the government has listed as dead, the paper reported.

On the Senate floor Monday evening, Republican senators lined up to hammer what they described as Pelosi's pork, and her derailment of their stimulus proposal.

Senate Republicans and Democrats had a tentative agreement on a bill before Pelosi, arriving back to Capitol Hill from recess, suddenly said she would introduce her own legislation.

"Today, 102 Americans died while the Democrats blocked consideration of this bill," Sen. Ted Cruz, R-Texas, said at one point. "One Texan died while this chamber decided not to show up for work and do their job."

Cruz also hit Democrats for seeking to bail out the U.S. Postal Service, which hasn't suggested it will terminate any employees.

"One of the reasons the Democrats think they will get away with this is they expect the media to be utterly complicit," Cruz added, noting that The New York Times conspicuously changed its headline three times Sunday evening to describe how Democrats had killed Republicans' stimulus bill.

Leaving the GOP stimulus legislation in limbo once more, the Senate stalled over the package Monday afternoon on a 49-46 vote. It needed 60 votes to advance.

Senate Majority Leader Mitch McConnell, R-Ky., then stormed to the floor to accuse Democrats of "mindless obstruction" that could drag out any action for days. He said Democrats' list of demands keeps getting "longer and longer."

After 7 p.m. ET, after hours of additional argument, McConnell announced, “We’ll not be having any votes tonight.” He filed cloture again to halt debate on the effort to start debate on the “shell” bill.

By the book, the new cloture petition won’t “ripen” for a vote until Wednesday. Lawmakers must allow for an “intervening day"; Tuesday is the intervening day -- but the Senate could technically then meet at 12:01 a.m. ET on Wednesday, and vote within an hour, given that time is of the essence.

They would need 60 yeas just to vault the procedural hurdle and formally start debate later in the week.

“Hope springs eternal," McConnell told Fox News as he left the floor, concerning whether a deal could be reached. “As you know, the talks continue no matter where people are physically located.”

Senate Minority Leader Chuck Schumer, D-N.Y., also offered an optimistic note as he left the Senate floor for the day, saying negotiations aren't "slowing down one bit" into the night, and asserting that “the list of outstanding issues has narrowed significantly.” 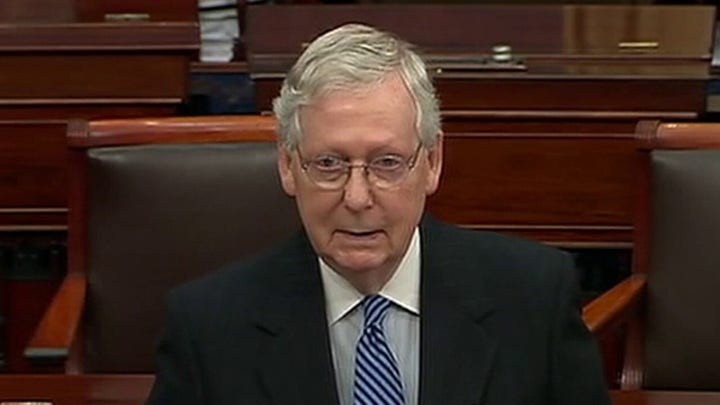 Democrats argued the more-than $1 trillion package did too much for large corporations and not enough for workers, and inaccurately suggested that the treasury secretary would have unilateral control over a massive "slush fund."

Republicans accused them of playing politics and using the crisis as leverage to try and jam through unrelated political "wish list" items concerning climate change and more.

“Here we are dilly-dallying around,” Thune said. “This bill is about workers, families, people out there hurting economically—we’re in a position to do something about it and it is high time that we did.”

"He's a notion-monger, just tossing out things that have no relationship to a well-coordinated, science-based, government-wide response to this," Pelosi said on a health-care conference call. "Thank God for the governors who are taking the lead in their state. Thank God for some of the people in the administration who speak truth to power.”

At the Capitol, the virus continued to strike close. Republican Sen. Rand Paul of Kentucky, who announced he tested positive for coronavirus, is now among five senators under self-quarantine. Several other lawmakers have cycled in and out of isolation. And the husband of Sen. Amy Klobuchar, D-Minn., is in a hospital with pneumonia after testing positive, she said Monday. 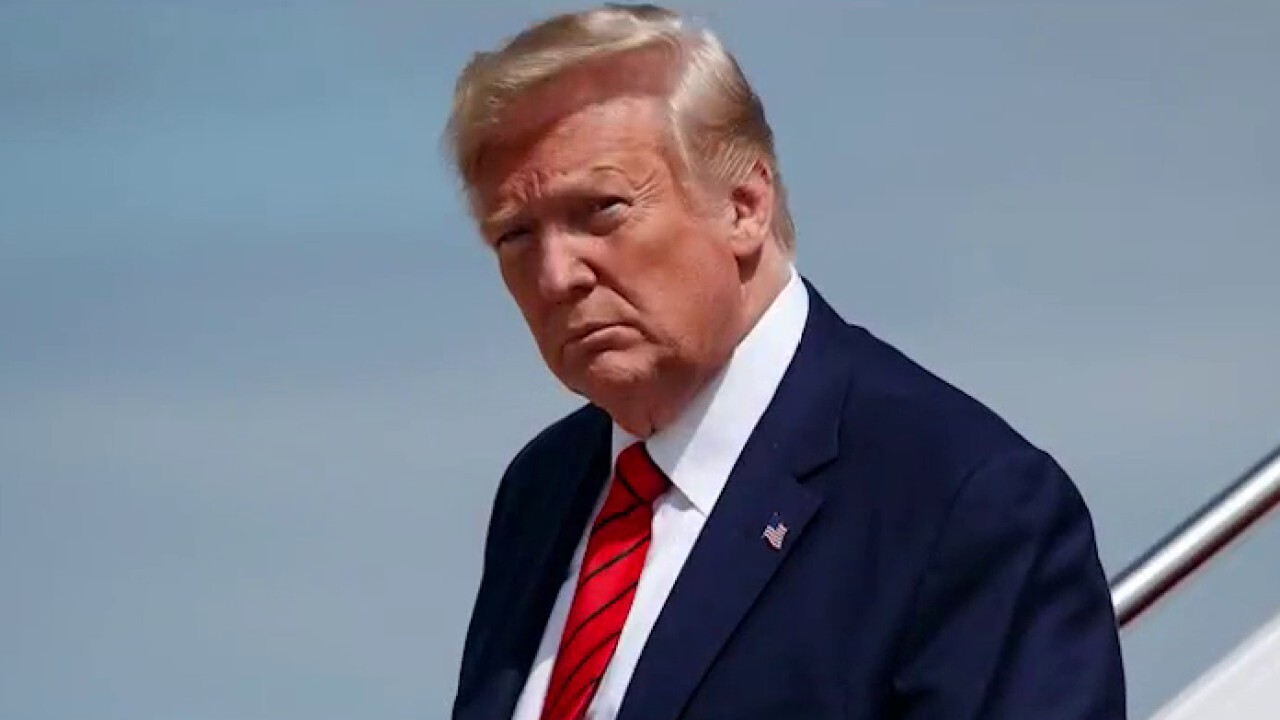 But, Democrats were reluctant to allow remote voting.

“We can’t always remote vote,” one House Democratic aide told Fox News. “If we let the toothpaste out of the tube, how do we put it back in?”

The House took three years in the early 1970s to implement its current electronic voting system. That’s why there’s concern about throwing together a system to remote vote now with encryption and authentication.

“Think about how bad the app was in Iowa,” said one Democratic leadership source, a reference to the disaster this winter with the Iowa Democratic Caucus.