US House of Representatives speaker Nancy Pelosi is greeted by Chairperson of the lower house of parliament Sean O Fearghail, left, on arrival at Leinster House in Dublin to deliver an address in Dublin, Ireland, Wednesday April 17, 2019. (Brian Lawless, via AP)

House Speaker Nancy Pelosi, speaking on foreign soil Wednesday, created some domestic tensions over President Trump’s call for a U.S.-U.K. trade deal should Britain leave the European Union -- telling the Irish Parliament that such a deal stands “no chance” if Brexit hurts the 1998 Irish peace accords.

"I’ve said it before and I’ll say it again, we must ensure that nothing happens in Brexit discussions that imperils the Good Friday accord – including, but not limited to, the seamless border between the Irish Republic and Northern Ireland," she told the Irish Parliament.

"Let me be clear: if the Brexit deal undermines the Good Friday accords, there will be no chance of a U.S.-U.K. trade agreement," said Pelosi, D-Calif., who is in the country as part of a U.S. delegation.

Pelosi’s reference to the Good Friday agreement refers to a complex issue related to Britain’s departure from the bloc, and how to reconcile trade between Northern Ireland (part of the U.K. and therefore leaving the bloc) and the independent Ireland (which would be staying in the E.U.) without the formation of a “hard border” between the two. The Good Friday Agreement brought an end to "The Troubles" that dogged Ireland for decades, and brought closer cooperation between Ireland and Northern Ireland -- including allowing people in Northern Ireland to identify as Irish, British or both.

Pro-Brexit lawmakers have objected to the inclusion in Prime Minister Theresa May’s withdrawal plan of a “backstop” -- a safety net by which the whole U.K. would remain in a customs union until a trade deal with the E.U. is secured. The fight over the backstop has been the main reason that May has struggled to get her deal through the British Parliament, and that Brexit has therefore been delayed until Oct. 31.

Some “Brexiteers” have indicated they are in favor of a “no deal” Brexit, whereby Britain leaves without a formal withdrawal agreement and reverts to World Trade Organization (WTO) terms, which opponents have warned could result in a “hard border" between Ireland and Northern Ireland.

But Pelosi’s remarks come after the White House, as well as Republican allies in Congress, have been renewing calls for a U.S.-U.K. deal. Any such deal would require congressional approval -- including in the House.

While President Trump has not weighed in specifically on the implications for the Irish peace accords, he has expressed enthusiasm for a bilateral trade deal as part of his continued support for Brexit.

"My administration looks forward to negotiating a large scale Trade Deal with the United Kingdom,” he tweeted last month. “The potential is unlimited!”

National Security Adviser John Bolton told Reuters in a recent interview that Trump is “very eager to cut a bilateral trade deal with an independent Britain.”

“It’s very complicated inside Britain,” Bolton said. “I know they’re going through a lot of turmoil. But really I think the president would like to reassure the people of the United Kingdom how strongly we feel, that we want to be there when they do come out of the European Union.”

Rep. George Holding, R-N.C., the ranking Republican of the British American Parliamentary Group and co-chair of the Congressional U.K. Caucus, wrote in an op-ed for The Daily Telegraph last week that a U.S.-U.K. free trade agreement is a “top priority” for the U.S.

“If the U.K. regains control over its national trade policy, our two nations will have a once-in-a-generation chance to forge an ambitious trade pact - a truly free, fair, and reciprocal agreement that will foster economic growth, spur innovation, and define a new global standard in trade,” Holding wrote. 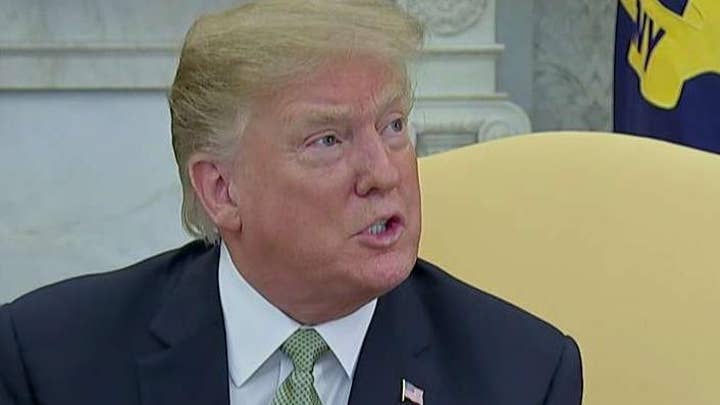 Pelosi’s comments appeared to have disgruntled lawmakers keen on a harder form of Brexit. According to the Irish Times, Pelosi made similar comments in a meeting with British lawmakers belonging to the pro-Brexit European Research Group (ERG) -- who have brushed off concerns about a “no deal” Brexit and have opposed May’s backstop solution.

Rep. Brendan Boyle, D-Pa., told the Times that while the majority of politicians they met with appreciated the delegation’s position, the ERG “were not exactly pleased.”

“The one exception clearly was the ERG who never explicitly accused us of taking sides but, as they expressed it, it is clear that their world view is that the Border issue is ‘concocted’ and that it is really just being used by Remainers in London, Brussels, Dublin and Washington all in some sort of grand conspiracy to force them to do something that they don’t want to do,” he said.

Pelosi’s remarks are likely to be seen by Brexit supporters as the latest effort by Democrats to ward the U.K. away from a departure from the E.U. Former President Barack Obama, just weeks before the 2016 referendum, famously warned Brits that the U.K. would be “back of the queue” for a trade deal if it left the E.U.

The country voted to leave the E.U. anyway.