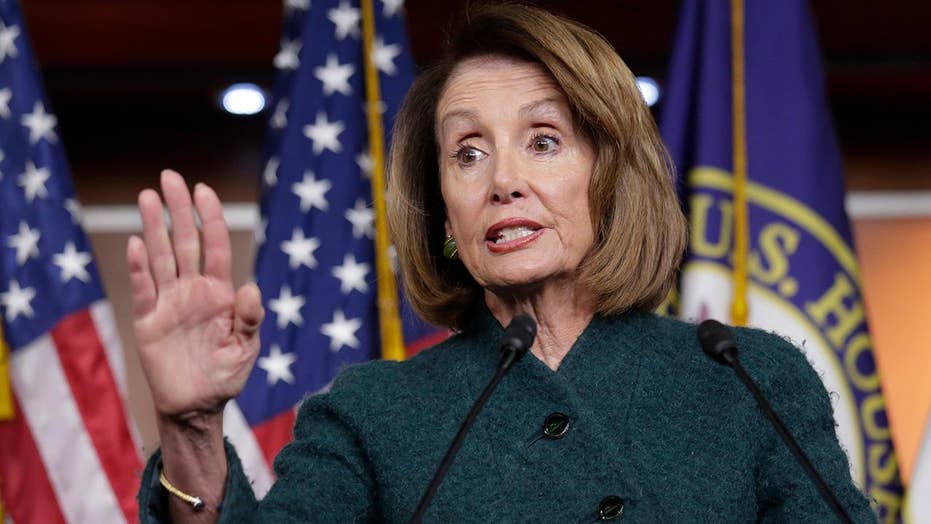 Senior DHS official says the Secret Service is ready for President Trump's State of the Union on January 29 and that no one from Nancy Pelosi's office checked with the Secret Service before requesting delay; chief White House correspondent John Roberts reports.

House Speaker Nancy Pelosi is facing a mounting backlash from Republicans for urging President Trump to delay his State of the Union address until after the partial government shutdown ends.

Pelosi, D-Calif., in a letter earlier Wednesday, suggested Trump either push back the scheduled Jan. 29 address or submit the speech in writing, citing security concerns amid the lapse in government funding.

But security officials have pushed back on her claim, claiming the teams are prepared. And Republican officials scoffed at the idea -- though the decision ultimately rests with Pelosi.

“It is unbecoming of a speaker to do this,” House Minority Leader Kevin McCarthy, R-Calif., said Wednesday.

“For Nancy Pelosi to withdraw the offer shows insecurity on their part and that they can’t defend their open borders policy,” Scalise told reporters on Capitol Hill Wednesday. “The country deserves to hear from the president. … to think the speaker would lock the doors and prevent people from hearing from the president of the United States.”

Scalise was asked whether he thought Pelosi was simply trying to get into the president’s head in the midst of negotiations, to which he replied: “I think he’s already gotten into her head—that she’s on the wrong side of this issue.”

Pelosi sent the letter to the White House on Wednesday, on what marked day 26 of the partial shutdown of the federal government, with no compromise in sight to resolve the standoff over funding for border security. The impact of the shutdown is further deepening for furloughed federal workers and those forced to work without pay.

“The U.S. Secret Service was designated as the lead federal agency responsible for coordinating, planning, exercising, and implementing security for National Special Security Events…” Pelosi wrote. “However, both the U.S. Secret Service and the Department of Homeland Security have not been funded for 26 days now—with critical departments hamstrung by furloughs.”

But one senior Homeland Security official told Fox News that they have been preparing for months for the State of the Union event.

“We are ready,” the official said. “Despite the fact members of the Secret Service are not being paid, the protective mission has not changed.”

The official added: “it is a ‘no fail’ mission.”

The official also noted that no one from Democratic congressional leadership reached out to the Secret Service to ask if the agency was able to secure the State of the Union address.

Another senior DHS official told Fox News that “there are no security concerns with the State of the Union.”

Later, Homeland Security Secretary Kirstjen Nielsen said that DHS and the Secret Service “are fully prepared to support and secure the State of the Union.”

“We thank the Service for their mission focus and dedication and for all they do each day to secure our homeland,” Nielsen tweeted.

The Department of Homeland Security is at the center of the dispute that triggered the shutdown, which began on Dec. 22. The president requested $5.7 billion in funding for border security and construction of a wall or physical barrier along the southern border. Democrats, though, have vowed to block any spending package that includes any funding for a border wall.

The shutdown, which is now the longest in U.S. history, has left more than 800,000 federal employees and contractors without pay. Some employees are deemed essential to government functions and are required to work without pay. Others have been furloughed, and also do not receive paychecks.