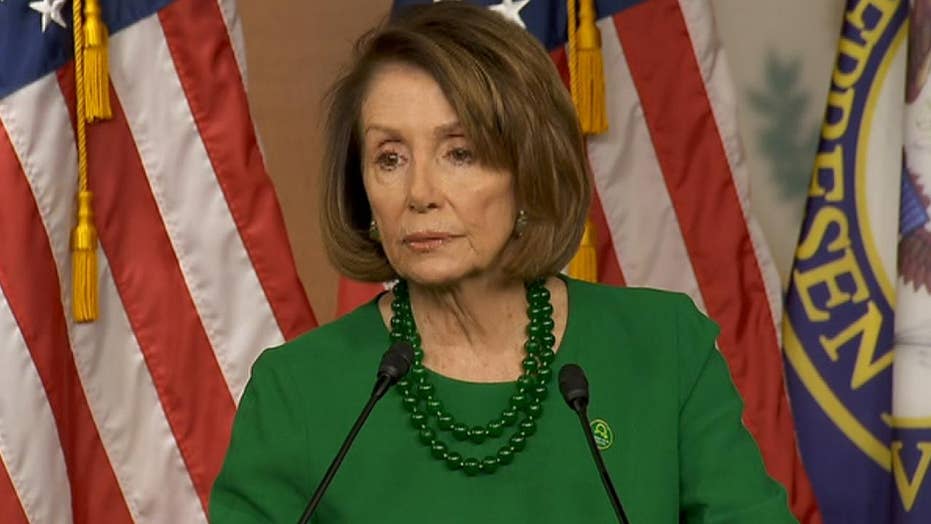 Pelosi: No DACA deal in exchange for border wall funding

House Democratic Leader Nancy Pelosi is digging in amid the fight over funding for President Trump's promised border wall, signaling Thursday she won’t accept a deal on DACA in exchange for wall money.

Speaking to reporters, the likely next House speaker said that DACA -- the Obama-era Deferred Action for Childhood Arrivals program giving a deportation reprieve to some immigrants brought to the U.S. illegally as children, and now at the center of a legal fight -- and the border wall are “two different subjects.”

She said she wouldn't back a DACA deal in order to fund a wall, for which Trump wants $5 billion, along the United States’ southern border with Mexico.

Pelosi is in a tough spot. Some members of the Congressional Hispanic Caucus, which sent a letter last week to Pelosi urging her to push for DACA and TPS protections, have cautioned that what kind of spending deal she cuts with Republicans – including if there are any concessions for the border wall – could affect how much support she receives from the influential caucus.

“I know Nancy needs all the support she can get right now. If they give away border-wall funding, I think there would be an effect on how the Congressional Hispanic Caucus would feel come Jan. 3,” Rep. Vicente Gonzalez, D-Texas, told the Wall Street Journal. “She should be very concerned that members of the CHC don’t abandon her Jan. 3 and I’m hoping she doesn’t abandon us while she’s negotiating this next budget.”

Pelosi spoke to reporters shortly before the House approved a short-term spending bill to avoid a partial government shutdown. Known as a “CR” or “Continuing Resolution,” the measure re-ups all money for the seven remaining spending bills at current levels through Dec. 21. The Senate followed suit shortly afterward.

But the disagreement over border wall funding, which is at the center of the budget gridlock, has yet to be resolved.

The California lawmaker’s comments come after she released a statement pledging to pass legislation that would put so-called Dreamers – beneficiaries of the DACA plan – on a path to citizenship when Democrats take control of the lower chamber of Congress in January.

“Our House Democratic Majority will once again pass the Dream Act to end the uncertainty and fear inflicted on patriotic young men and women across the country,” Pelosi said in her statement on Saturday. “Of course, we will meet our responsibility to provide strong, smart border security that serves our country’s needs, is consistent with our values, and doesn’t squander billions of dollars on a border wall.”

DACA allows children brought to the U.S. illegally by their parents to apply for a renewable two-year deferral from deportation and to become eligible for a work permit. It has been one of the most hotly contested issues in the immigration debate since it was announced eight years ago.

The Trump administration announced in September of last year plans to end the program and gave Congress six months to pass the so-called DREAM Act, which has been batted around in Congress since 2001 and would provide a path to citizenship for the 700,000 DACA recipients. A prolonged court battle, however, has kept the program alive.

Democratic lawmakers in the House have urged Pelosi to schedule a vote on legislation to protect DACA and immigrants with Temporary Protected Status (TPS) within the first 100 days of the 116th Congress. TPS is a program that allows certain immigrants who have fled armed conflicts or natural disasters – such as those from El Salvador and Haiti – to live and work in the U.S. for a limited time.

“We will protect TPS recipients and those fleeing unimaginable violence,” Pelosi said.