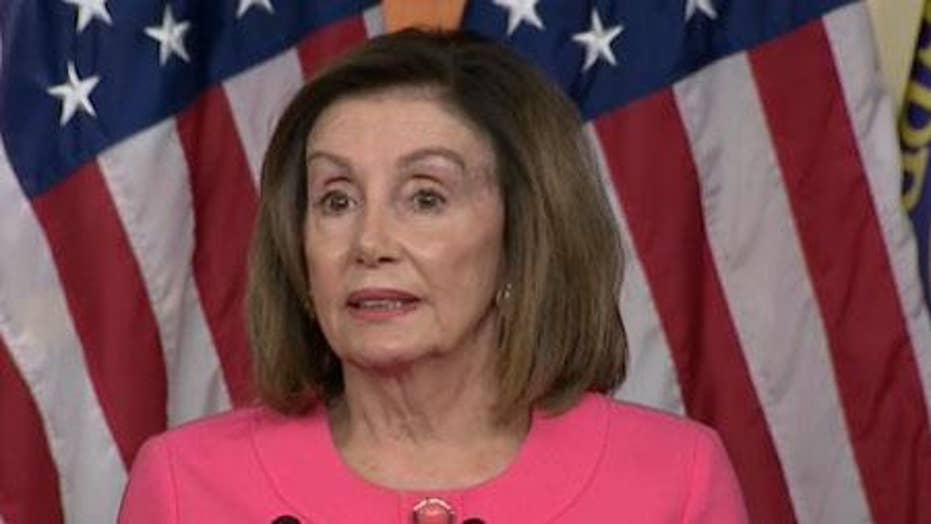 House Speaker Nancy Pelosi needled President Trump on Wednesday as she prepared to send articles of impeachment over to the Senate, repeatedly describing the indictment by the House as a permanent stain on his legacy -- no matter what happens next.

“He’s been impeached forever. They can never erase that,” Pelosi said at a press conference announcing her impeachment managers, who will prosecute the case.

While Trump is likely to be acquitted in the GOP-led Senate, Pelosi argued that the 45th president of the United States will forever be marred with an asterisk in history.

The Democratic-led House passed the articles of impeachment on Dec. 18 for abuse of power and obstruction of Congress, making him just the third president in history to face such a rebuke from the House.

Pelosi said Trump has already been held accountable because the House voted for “an impeachment that will last forever."

Trump hit back moments later, calling the effort "another Con Job by the Do Nothing Democrats."

The articles allege that Trump pressured Ukraine to investigate his political rivals to influence the 2020 election and then blocked the House from conducting oversight. Witnesses testifying in the House said the Trump administration withheld $391 million in much-needed security assistance and a White House visit from newly elected president Volodymyr Zelensky as a condition to investigate former Vice President Joe Biden and his son, Hunter, who sat on a board of an energy company in Ukraine.

Trump has long fought back against the charges and maintains the call with Zelenksy was “perfect.” He has plenty of GOP allies in the Senate who have said Trump's conduct is not impeachable and blasted Democrats for a purely political exercise aimed at undoing the results of the 2016 election.

As early as Thursday, Chief Justice John Roberts could arrive at the Capitol and swear in the senators for the historic impeachment trial. The opening statements from the House managers are expected to begin next week.