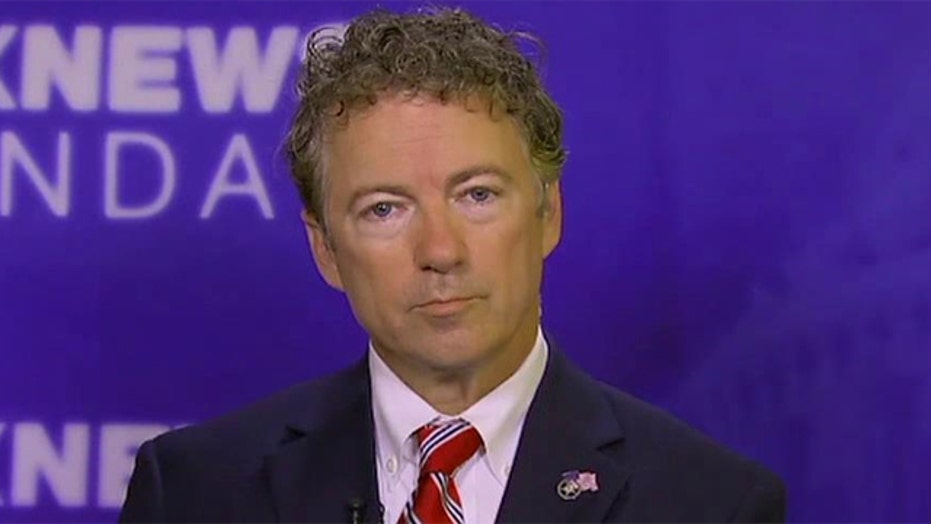 "I think the time is now to discuss whether taxpayer dollars should be going to such a gruesome procedure," Paul told “Fox News Sunday.” "I really think that time has come in our country to debate -- do people want their taxpayer dollars going to this kind of procedure?"

He is one of several Republican lawmakers or presidential candidates who have said they want to eliminate Planned Parenthood's federal funding, which they so far have failed to do.

Paul said he is trying a long-shot legislative maneuver -- submitting a “discharge position” -- to force the vote when senators return Sunday to Washington to vote on a transportation and transit funding bill set to expire in a few days.

“I think we might likely win that vote,” he said.

Paul did not attempt to make any legislative moves Sunday on the chamber floor. However, Utah Sen. Mike Lee, a fellow Republican, tried unsuccessful to submit an amendment to defund the group, which gets an estimate $500 million in federal funds annually.

Abortion opponents say the videos show that Planned Parenthood is illegally harvesting and selling the organs. The group says it has done nothing wrong and that the stealth videos were deceptively edited to support extremists' false claims.

Anti-abortion activists, under the banner of the previously obscure Center for Medical Progress, released the two videos secretly recorded in 2014 and 2015 by people posing as buyers of fetal tissue.

One video shows their conversation with Dr. Deborah Nucatola, Planned Parenthood's senior director of medical services; the other is with Dr. Mary Gatter, one of the organization's medical directors.

In both videos, the Planned Parenthood officials discuss the fees the group charges to provide the organs and the abortion procedures used to obtain the organs.

Planned Parenthood's president, Cecile Richards, has apologized for the "tone and statements." Senate Minority Leader Harry Reid, D-Nevada, said he has seen no indication that the organization broke federal laws, but that "should be looked into."

On Sunday, Richards took part in her first live interview regarding the controversy, repeating that the organization has broken no laws. And she went directly after the Center for Medical Progress.

"The folks behind this, in fact, are part of the most militant wing of the anti-abortion movement that has been behind the bombing of clinics, the murder of doctors in their homes and in their churches,” she told ABC’s “This Week.” “And that's what actually needs to be looked at."

Three congressional committees are making inquiries into Planned Parenthood, including the House Energy and Commerce Committee, which wants a briefing from Nucatola.

Paul is now is seventh place among 2016 GOP presidential candidates but has lost several percentage points in recent weeks, according to an averaging of polls by the nonpartisan website RealClearPolitics.com. He was at 10.5 percent in February.

On Sunday, he argued that his message is still resonating with voters, despite a drop-off in interest regarding a couple of his key issues -- the U.S. government collecting data on Americans and the surge of such terror groups as the Islamic State, or ISIS.

“Even by government accounts, we have not been catching any terrorists with the collection of bulk data,” Paul said.