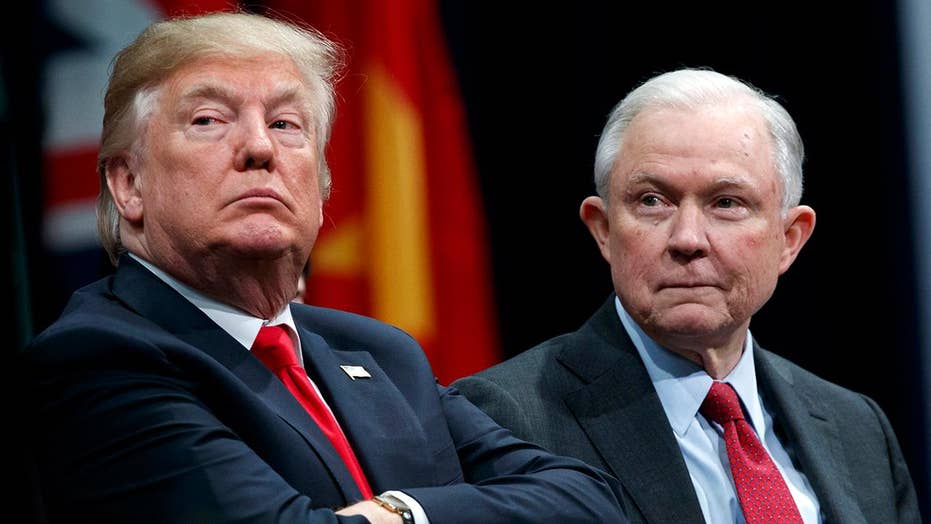 Sessions resigned Wednesday at President Trump's request. The two have had a strained relationship ever since Sessions recused himself from the Russia probe -- Trump did not wait long for the midterm dust to settle to seek his resignation, which immediately put congressional Democrats on high alert for the possibility of any interference with Special Counsel Robert Mueller's investigation.

But amid that controversy, Sessions sent the farewell message to Justice Department employees touting their work and accomplishments together.

“To have led a Department like this goes beyond anything I ever would have thought possible,” he wrote. “If you had told me when I was starting out as a young Assistant United States Attorney that I would ever serve as Attorney General, I don’t think I would have believed you.”

“We have reached an amazing level of productivity and sophistication,” he said. “These accomplishments are your accomplishments—products of your work.”

The president announced that Matthew Whitaker, chief of staff to Sessions, would become the acting attorney general. Whitaker, according to sources, is now overseeing everything at the Justice Department, including the Russia investigation

“We thank Attorney General Jeff Sessions for his service, and wish him well! A permanent replacement will be nominated at a later date,” Trump tweeted Wednesday.

Sessions’ departure from the Justice Department was not unexpected, as the president has signaled for months that there would be changes to his administration after the midterms. No one faced more rumors of an imminent dismissal than Sessions.

For more than a year, Trump has repeatedly attacked Sessions over his recusal from the Russia investigation, saying he wouldn’t have installed him in the post had he known he would recuse himself from the probe.

In September, Trump said, “I don’t have an attorney general. It’s very sad.”

Sessions’ decision to recuse himself in March 2017 was based on his involvement with the Trump campaign during the 2016 presidential election. In his place, Deputy Attorney General Rod Rosenstein led the investigation, overseeing the work done by Mueller.

“I am grateful to have served with people of your caliber and may God bless you and your families in all you do,” Sessions wrote to colleagues. “Keep improving, getting better and more productive.”