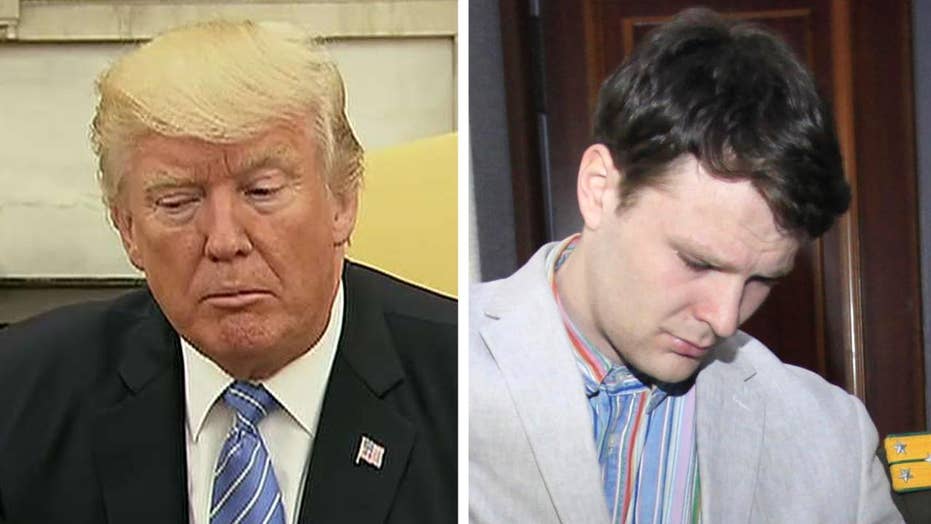 Trump: What happened to Otto was a total disgrace

President remarks on the death of the American college student released by North Korea after 17 months imprisonment; says Warmbier should have been brought home a long time ago

A growing chorus of U.S. lawmakers are declaring the death of American college student Otto Warmbier just days after he was released from a North Korean prison "murder," and all eyes are on the White House as the Trump administration weighs possible responses.

Warmbier, the University of Virginia student detained in North Korea for nearly a year and a half, died on Monday as a result of what his parents called "awful torturous mistreatment... at the hands of the North Koreans." His death came just a week afer he was flown home in a coma-like state with devere brain damage.

"There is nothing more tragic for a parent than to lose a child in the prime of life," a somber President Trump said Monday.

"The North Korean regime is mistaken if it believes that its barbaric mistreatment of an American citizen held in depraved captivity for over a year will pass quietly."

The U.S. will "be able to handle it," Trump added.

The administration was already wrestling with option for containing an increasingly belligerent  North Korea before the shocking return of a mortally wounded Warmbier. As the rogue regime repeatedly threatened the U.S. and its regional allies, testing missiles at least nine times since Trump's election, the administration looked to China to help.

On Tuesday, Trump signaled he could be ready for the U.S. to act alone.

"While I greatly appreciate the efforts of President Xi & China to help with North Korea, it has not worked out," Trump tweeted.

Secretary of State Rex Tillerson says the U.S. will "hold North Korea accountable" for Warmbier's "unjust imprisonment," and is also demanding the release of three other Americans who are being detained.

Some U.S. lawmakers, however, are calling for a powerful and unmistakable response"

"The North Korean regime is mistaken if it believes that its barbaric mistreatment of an American citizen held in depraved captivity for over a year will pass quietly," Sen. Ted Cruz, R-Texas said.

North Korean leader Kim Jong Un waves as he participates in a photo session with officials who are committed to the success of the test-fire of surface-to-surface medium long-range strategic ballistic missile Hwasong-10, in this undated photo released by North Korea's Korean Central News Agency (KCNA) June 28, 2016. REUTERS/KCNA ATTENTION EDITORS - THIS PICTURE WAS PROVIDED BY A THIRD PARTY. REUTERS IS UNABLE TO INDEPENDENTLY VERIFY THE AUTHENTICITY, CONTENT, LOCATION OR DATE OF THIS IMAGE. FOR EDITORIAL USE ONLY. NO THIRD PARTY SALES. SOUTH KOREA OUT. THIS PICTURE IS DISTRIBUTED EXACTLY AS RECEIVED BY REUTERS, AS A SERVICE TO CLIENTS. TPX IMAGES OF THE DAY - RTX2IOVD (REUTERS)

Sen. Marco Rubio, R-Fla., also suggested North Korea "must be held accountable for this brutality," and scoffed at North Korea's justification for sentencing Warmbier to 15 years hard labor. The stgudent allegedly took down a poster of dictator Kim Jong Un.

"Otto Warmbier should never have been in jail for tearing down a stupid banner. And he most certainly should not have been murdered for it," Rubio tweeted.

Finally, Sen. John McCain, R-Ariz., suggested in a statement that "The United States of America cannot and should not tolerate the murder of its citizens by hostile powers.”

Channelling the outrage into a diplomatic or military response falls to the Trump administration. The U.S. and others have long turned to economic sanctions as a form of punishment, and the State Department confirmed that a travel ban is being considered. South Korean officials announced Tuesday that the U.S. flew two supersonic bomber jets over the Korean peninsula today in what was described as a “show of force” responding to Warmbier’s death.

Appearing on “The Story w/Martha MacCallum” Monday night, retired four-star Gen. Jack Keane said he also believes Warmbier's death to be "a murder committed...by the North Koreans," and added that he thinks the incident will "strengthen our resolve, that we really have to do something once and for all about this regime.

"I kind of think the administration is there, but I think this will toughen them up," Keane said.

Keane also seems to believe that the diplomatic route is the way to go, and that the U.S. could have to independently pursue "tougher sanctions" if our allies (ie: China) are unable to help.

Bill Richardson, the former governor of New Mexico and a 2008 Democratic presidential candidate, apparently had a hand in Warmbier's release via his foundation, The Richardson Center. In a recent interview, Richardson suggested that Warmbier's death will "set back any serious discussion about a diplomatic dialogue until this is cleared up.”

Gordon Chang, a Daily Beast columnist and author of "Nuclear Showdown: North Korea Takes On the World," called Warmbier's death a case of "state-sanctioned murder," and believes that President Trump will have to do more than the usual song and dance.

"North Koreans thought it was safe to brutalize Otto Warmbier," Chang wrote. "Now is the time to make sure they never harm another American again."

Asked today whether the U.S. is considering retaliation beyond sanctions or a potential travel ban, State Department spokesperson Heather Nauert said it was too early to say just over 24 hours after Warmbier’s death. She conceded that the U.S. is “considering our options.”

Nauert declined to comment on the characterization of Warmbier's death as murder, and bristled at one reporter's suggestion that the administration had been slow to express outrage at Warmbier's treatment.

"It's something that's of great concern to the administration, Nauert told Fox News' James Rosen. "Everyone's grieving. Everyone is concerned about that, and understandably upset about that. So we're just going to be - continue to take a look at what we can do about this. And I'm just going to have to leave it there."