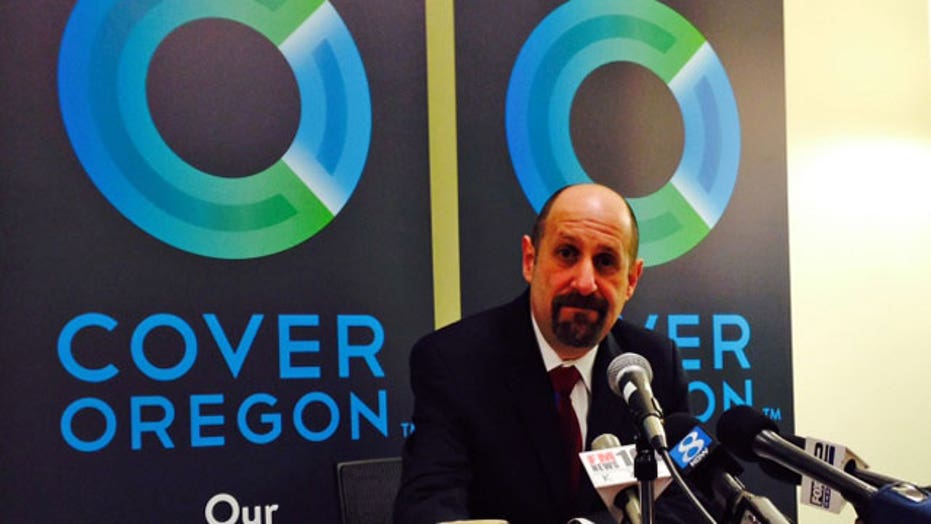 Cover Oregon was supposed to be a shining example of ObamaCare at its best.

The state insurance exchange for the state of Oregon received $300 million in federal grants to launch a state-of-the-art website. But it never worked, and not a single Oregonian was able to sign up for health care from start to finish.

So now, Oregon is in the process of pulling the plug on the site and switching over to the federal exchange and HealthCare.gov -- but the question is, how quickly they can do it.

“We need to move forward and do the best thing for the people of Oregon,” Republican State Sen. Tim Knopp said, “and I think that’s ending Cover Oregon as soon as we practically can.”

Knopp and other Oregon Republicans are calling for a special session of the Legislature -- since lawmakers created Cover Oregon, only the Legislature can end it. But Democrats control the Legislature and the governor’s office, and they’re pushing back against Republicans' demand, and would rather wait until the 2015 session convenes in February to complete the transition.

“There are functions that still have to be performed by someone in the next few weeks and months,” Democratic state Sen. Richard Devlin said.

Inaction comes with a price tag.

According to Republican leaders, it costs taxpayers $200,000 a day to keep Cover Oregon running. Waiting until February 2015 or beyond will cost $20 million.

A libertarian think tank is urging a Cover Oregon death sooner, not later. “The simplest thing to do, the cleanest thing to do would be to give Oregonians some certainty and say, you won’t be having to deal with Cover Oregon come November,” said Steve Buckstein of the Cascade Policy Institute.

Oregon officials decided earlier this year to hand off Cover Oregon functions to the Oregon Health Authority, which will work with the federal exchange and HealthCare.gov. But the transition is complicated by a lawsuit filed by the state of Oregon against its website contractor, Oracle. The state is seeking reimbursement alleging a breach of contract.

Also, there recently has been more bad news for Cover Oregon and hundreds of Oregonians. The agency recently discovered it made a serious miscalculation when determining the federal tax credit for 775 families that purchased health plans on the state exchange. It turns out they owe more taxes than they were told.

“This is Cover Oregon’s error,” said Cover Oregon’s Executive Director Aaron Patnode. “So what we’re evaluating at this time is the proper course of action to make sure these consumers have the least financial impact as possible.”

Some in the Oregon Legislature want the government to pay the back taxes.