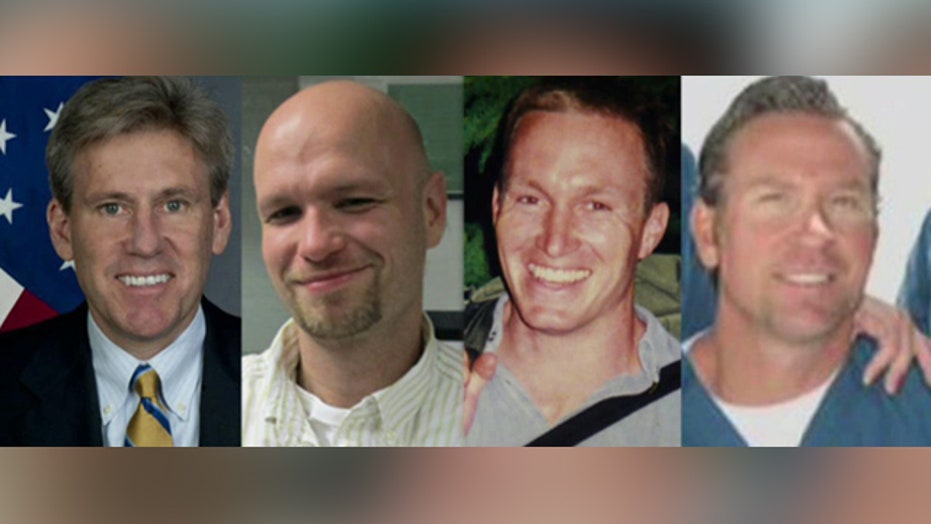 Why no arrests over Benghazi attack one year later?

Where does investigation stand?

WASHINGTON – On the one-year anniversary of the brutal terror attacks in Benghazi, the families of the four murdered Americans are still no closer to the truth about what happened to their loved ones than they were 12 months ago.

Five House panels and an internal investigation later, no one has been arrested, no one has been fired or held accountable, and the communication between the families of the victims and the State Department and White House has become almost non-existent.

“When I was there in Washington, when this first started, the FBI had me in a room to tell me what they were doing,” Pat Smith, the mother of Sean Smith, one of the Americans killed in the terror attacks, told Fox News.

Smith says President Obama, then-Secretary of State Hillary Clinton and the FBI promised her that finding out who killed her son Sean, an information specialist working in Benghazi, would be a top priority.

But it’s a commitment Smith says the president hasn’t kept.

“The government is not doing what they should do,” she said. “Everybody knows this. They lie to you. They tell you what they want you to know. It may or may not be correct. And in my case, it’s always been lies.”

One day after the 2012 attack, Obama told the country that “we will not waver in our commitment to see that justice is done for this terrible act.”

Smith and the families of U.S. Ambassador Christopher Stevens, and former Navy SEALs Tyrone Woods and Glen Doherty, have said they were promised answers but so far, haven’t gotten many.

“It has been almost a year since my son Ty Woods sacrificed his life defending 30 Americans at the Benghazi consulate,” Charles Woods said in a written statement Monday. “After one year, we still do not have answers.”

Smith's uncle Michael Ingmire also circulated a letter this week blasting Congress for not doing enough to seek the truth in what happened. He claimed House Speaker John Boehner "failed" in his leadership by bucking calls for an independent investigative panel.

In August, Secretary of State John Kerry reassigned four State officials who had been put on paid administrative leave following criticism of their conduct during and following the deadly attack.

The move angered many conservatives who have long called for the government to hold someone accountable.

Rep. Darrell Issa, R-Calif., chairman of the House Oversight and Government Reform committee, called Kerry’s actions “a charade that included false reports of firings and resignations and now ends in a game of musical chairs where no one misses a single day on the State Department payroll.”

Last month, federal prosecutors filed the first criminal charges related to the Benghazi attacks against Libyan leader Ahmed Abu Khattalah, but no arrests have been made.

The White House, State Department, CIA and FBI have been repeatedly pressed on why they haven’t been able to catch Khattalah, who has given multiple media interviews, including some that took place in open-air markets and coffee shops.

When asked on “Fox News Sunday” why authorities haven’t been able to catch a man who doesn’t really seem to be in hiding, White House Chief of Staff Denis McDonough seemed to be caught off guard.

“We’ve been very clear that we will hold those people who carried out this dastardly, heinous attack against our people to account,” he said. “You know what the United States does? We track every lead until we …can accomplish what we say we will do.”

But to Smith, it’s the same runaround she’s been hearing for months.

“When I was there in Washington, when this first started the FBI had me in a room over there to tell me what they were doing,” Smith said. “There were about 10 of them sitting around the table, with the attorney and everybody that was involved with the FBI. And they said they were going to follow this up until they finally got the guys that did this and they showed me pictures of three different guys that they suspected and wanted to question and bring them in.

"Those same three guys never were caught, never were questioned and I saw the same three pictures of them just the other day on TV. They are still looking for them. So I don’t have too much faith in that.”

The Justice Department said in a written statement on Tuesday that investigators have made "very significant progress in the investigation."

Some military and law enforcement officials also say they’re frustrated with what they claim is the White House’s unwillingness to apply pressure to the Libyan government to arrest the people in connection with the attack or – as an alternative -- to allow American authorities to come to Libya and do it themselves.

On Monday, Rep. Frank Wolf, R-Va., suggested the trepidation over Benghazi could be linked to the situation in Syria.

“I firmly believe that whatever the State Department and CIA were doing in Benghazi had a direct connection to U.S. policy in Syria – a policy that to date has not been fully revealed to the American people or to Congress,” Wolf said during a panel discussion at Judicial Watch’s headquarters in Washington.

Wolf believes that the government had been stockpiling weapons for Syrian opposition fighters when they came under attack by terrorists in Benghazi.

“How can this conversation advance in a responsible manner without clarity about what transpired that night in Benghazi?” he said.

Wolf is using the accusation to launch his renewed calls for the creation of a House Select Committee to investigate the Benghazi incident. He argues that forming a select committee will give lawmakers the power they need to subpoena additional witnesses, whistleblowers and documents linked to the attack in Libya.

So far, more than 160 lawmakers have signed their names to the petition asking Boehner to green-light the formation of the bipartisan committee.

A subpoena would be a legally enforceable demand to produce information, whether it's oral testimony, documents or electronic information. Calls to Boehner’s office were not returned.