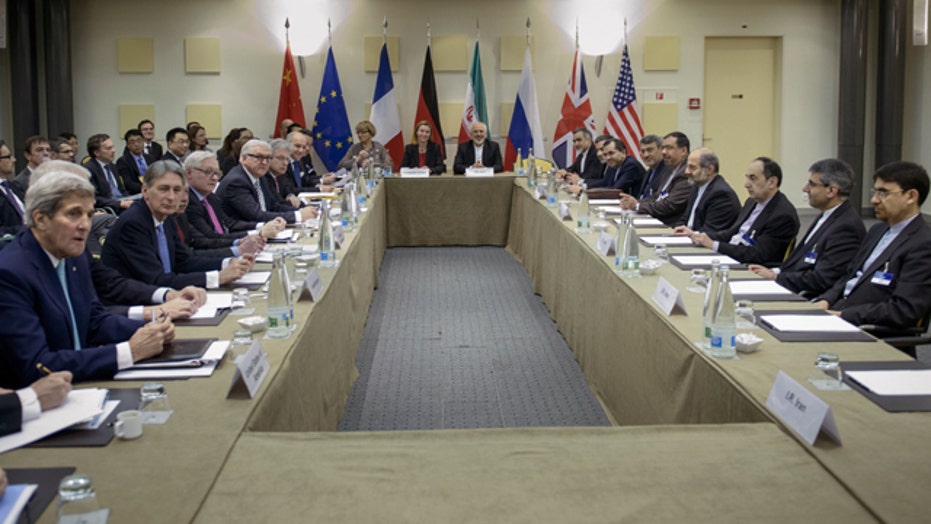 Negotiators from the U.S. and five other world powers resumed talks with Iran over the future of its nuclear program in Switzerland Thursday after an all-night session.

U.S. Secretary of State John Kerry has already postponed his planned departure twice from an original March 31 deadline, even as other foreign ministers have begun to sit negotiations out. His Iranian counterpart, Javad Zarif, made another optimistic statement to reporters Thursday, saying that both sides had made "significant progress" before adding that there is not yet a "final result."

Asked if reaching agreement on the framework of a permanent deal would be possible Thursday, Iranian nuclear chief Ali Akbar Salehi said "the sunrise is just ahead."

On Wednesday Harf said that Kerry would "remain in Lausanne until at least Thursday morning to continue the negotiations", adding "we continue to make progress, but have not reached a political understanding."

As on the prior two days, it was unclear Thursday morning what would happen if agreement on a deal outline was not reached by the end of the day. The deadline to produce a final agreement is the end of June.

German Foreign Minister Frank-Walter Steinmeier had said Wednesday that negotiators were still facing a "tough struggle," indicating the talks were not likely to end anytime soon. "[T]here will be new proposals, new recommendations. I can't predict whether that will sufficient to enable an agreement to be reached," he said.

At the same time, Zarif accused his country's negotiating partners, particularly the U.S., of having "defective" political will in the talks.

The foreign ministers of China, France and Russia previously had departed Lausanne Tuesday night. With talks bleeding into Thursday, French Foreign Minister Laurent Fabius reportedly was on his way back.

But patience may be wearing thin.

White House Press Secretary Josh Earnest said Wednesday that talks were "making some progress" but that "we have not yet received the specific, tangible commitments we and the international community require."

And he restated a threat that the U.S. and others are prepared to leave the table.

"We're going to drive a hard bargain and we're going to expect Iran to make serious commitments," he said. "And we're going to give them the opportunity to do so.  But if they don't, the international community, alongside the United States, is prepared to walk away and consider some alternatives."

The Obama administration has faced recent calls to do just that.

Sen. Tom Cotton, R-Ark., told Fox News he's concerned the framework of a deal could allow Iran keep its uranium stockpiles and continue to enrich uranium in an underground bunker.

"You have to be willing to walk away from the table and to reapply leverage to Iran," Cotton said. "And the fact that they're not willing to do that, that we're still sitting in Switzerland negotiating when three of our negotiating partners have already left just demonstrates to Iran that they can continue to demand dangerous concessions from the West."

Speaking on MSNBC, former Democratic presidential candidate Howard Dean seemed to agree. He said that while President Obama is "right" to seek a deal, it might be time to "step away" from the table and make clear that the U.S. is not backing off key positions -- including on Iran's uranium stockpile and the pace of sanctions relief.

The negotiators' intention is to produce a joint statement outlining general political commitments to resolving concerns about the Iranians' nuclear program in exchange for relief of economic sanctions against Iran. In addition, they are trying to fashion other documents that would lay out in more detail the steps they must take by June 30 to meet those goals.

But Iran has pushed back not only on the substance of the commitments the sides must make but to the form in which they will make them, demanding that it be a general statement with few specifics.  That is politically unpalatable for the Obama administration which must convince a hostile Congress that it has made progress in the talks so lawmakers do not enact new sanctions that could destroy the negotiations.

Zarif said the result of this round of talks "will not be more than a statement."

A senior Western official pushed back on that, saying that nothing about a statement had been decided and that Iran's negotiating partners would not accept a document that contained no details. The official was not authorized to speak to the negotiations by name and spoke on condition of anonymity.

Deputy Iranian Foreign Minister Abbas Araghchi named differences on sanctions relief as one dispute -- but also suggested some softening of Tehran's long-term insistence that all sanctions on his country be lifted immediately once a final deal takes effect.

He told Iranian TV that economic, financial, oil and bank sanctions imposed by the U.S., the European Union and others should be done away with as "the first step of the deal."

Alluding to separate U.N. sanctions he said a separate "framework" was needed for them.

Negotiations have already been twice extended since an interim agreement between Iran, the United States, Russia, China, Britain, France and Germany was concluded in 2013. President Obama and other leaders, including Iran's, have said they are not interested in a third extension.

But if the parties agree only to a broad framework that leaves key details unresolved, Obama can expect stiff opposition at home from members of Congress who want to move forward with new, stiffer Iran sanctions. Lawmakers had agreed to hold off on such a measure through March while the parties negotiated. The White House says new sanctions would scuttle further diplomatic efforts to contain Iran's nuclear work and possibly lead Israel to act on threats to use military force to accomplish that goal.