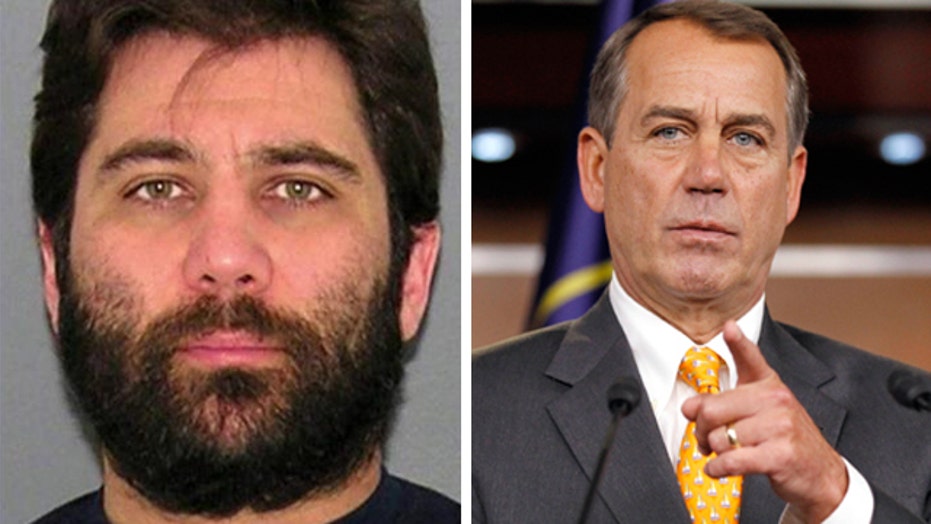 A former Ohio country club bartender -- who told authorities that he was Jesus Christ -- allegedly threatened to murder House Speaker John Boehner last fall because he believed the Ohio congressman was responsible for Ebola, according to records made available Tuesday.

A grand jury indictment filed in U.S. District Court in Ohio on Jan. 7 identified the accused man as Michael R. Hoyt, a resident of Cincinnati.

A separate criminal complaint said Hoyt was fired last fall from his job at a country club in West Chester, Ohio, where he served drinks to Boehner, who is a member.

In a subsequent conversation with a police officer, Hoyt said that before leaving, he "did not have time to put something in John Boehner's drink," according to the complaint.

The court paper also said, "Hoyt told the officer he was Jesus Christ and that he was going to kill Boehner because Boehner was mean to him at the country club and because Boehner is responsible for Ebola."

According to the criminal complaint, Hoyt said he had a loaded Beretta .380 automatic pistol and he was going to shoot Boehner. Hoyt volunteered to be taken to a psychiatric hospital, and police took his weapon.

He is currently being held under a court order for mental evaluation and treatment, and U.S. Capitol Police and the FBI believe he "poses a current and ongoing credible threat" to Boehner, the complaint added.

The complaint says Hoyt was treated for a previous psychotic episode about two years ago. He was prescribed medication "which he voluntarily stopped taking" about six months ago, it added.

A senior congressional source told Fox News that Hoyt was committed to a mental institution from October through the end of December but then was released. Once he was out, law enforcement felt strongly enough to move to indict him to get him off the street because of the potential threat posed to Boehner.

“He said some things that really spooked us,” said one senior congressional source who is familiar with the case but asked not to be identified.

As speaker of the House, Boehner is second in line for the presidency in the event of a vacancy. His congressional district includes part of western Ohio.

A spokesman for Boehner, Michael Steel, said the speaker is "aware of the situation and sincerely thanks the FBI, the Capitol Police and the local authorities in Ohio for their efforts."

The Capitol Police could not be reached for immediate comment.

It was not clear why officials waited as long as they did to disclose the charge. The grand jury indictment is dated Jan. 7, but the incident referred to in the papers took place on Oct. 29 of last year, and the complaint itself was filed on Nov. 6.