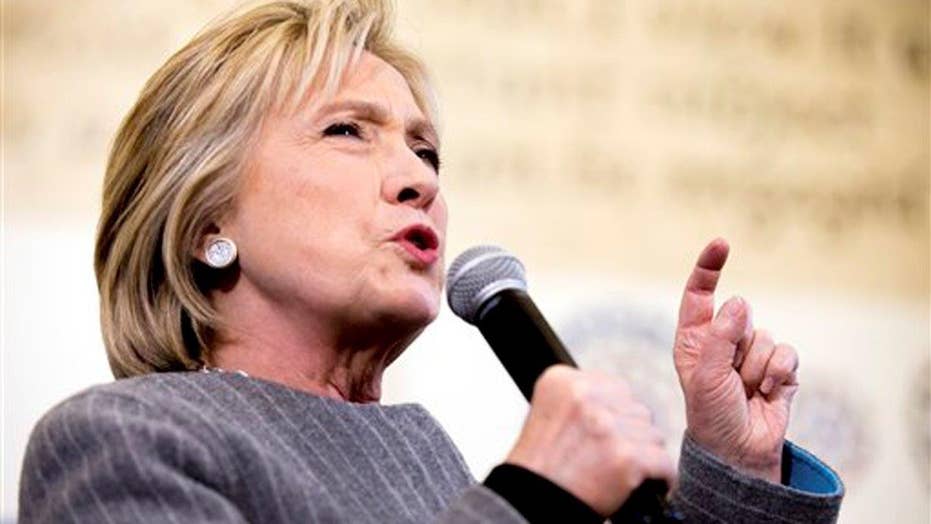 The official, who was not authorized to speak on the record and was limited in discussing the contents because of their highly classified nature, was referring to the 22 “TOP SECRET” emails that the State Department announced Friday it could not release in any form, even with entire sections redacted.

The announcement fueled criticism of Clinton’s handling of highly sensitive information while secretary of state, even as the Clinton campaign continued to downplay the matter as the product of an interagency dispute over classification. But the U.S. government official’s description provides confirmation that the emails contained closely held government secrets. “Operational intelligence” can be real-time information about intelligence collection, sources and the movement of assets.

The official emphasized that the “TOP SECRET” documents were sent over an extended period of time -- from shortly after the server's 2009 installation until early 2013 when Clinton stepped down as secretary of state.

Separately, Rep. Mike Pompeo, R-Kan., who sits on the House intelligence committee, said the former secretary of state, senator, and Yale-trained lawyer had to know what she was dealing with.

"There is no way that someone, a senior government official who has been handling classified information for a good chunk of their adult life, could not have known that this information ought to be classified, whether it was marked or not,” he said. "Anyone with the capacity to read and an understanding of American national security, an 8th grade reading level or above, would understand that the release of this information or the potential breach of a non-secure system presented risk to American national security."

Pompeo also suggested the military and intelligence communities have had to change operations, because the Clinton server could have been compromised by a third party.

“Anytime our national security team determines that there's a potential breach, that is information that might potentially have fallen into the hands of the Iranians, or the Russians, or the Chinese, or just hackers, that they begin to operate in a manner that assumes that information has in fact gotten out,” Pompeo said.

On ABC's “This Week” on Sunday, one day before the Iowa caucuses, Clinton claimed ignorance on the sensitivity of the materials and stressed that they weren’t marked.

"There is no classified marked information on those emails sent or received by me," she said, adding that “Republicans are going to continue to use it [to] beat up on me.”

Clinton was pressed in the same ABC interview on her signed 2009 non-disclosure agreement which acknowledged that markings are irrelevant, undercutting her central explanation. The agreement states "classified information is marked or unmarked … including oral communications."

Clinton pointed to her aides, saying: "When you receive information, of course, there has to be some markings, some indication that someone down the chain had thought that this was classified and that was not the case.”

But according to national security legal experts, security clearance holders are required to speak up when classified information is not in secure channels.

"Everybody who has a security clearance has an individual obligation to protect the information," said national security attorney Edward MacMahon Jr., who represented former CIA officer Jeffrey Sterling in the high-profile leak investigation regarding a New York Times reporter. "Just because somebody sends it to you … you can't just turn a blind eye and pretend it never happened and pretend it's unclassified information."

These rules, known as the Code of Federal Regulations, apply to U.S. government employees with security clearances and state there is an obligation to report any possible breach by both the sender and the receiver of the information. The rules state: "Any person who has knowledge that classified information has been or may have been lost, possibly compromised or disclosed to an unauthorized person shall immediately report the circumstances to an official designated for this purpose."

The Clinton campaign is now calling for the 22 “TOP SECRET” emails to be released, but this is not entirely the State Department's call since the intelligence came from other agencies, which have final say on classification and handling.

"The State Department has no authority to release those emails and I do think that Secretary Clinton most assuredly knows that," Pompeo said.

Meanwhile, the release of other emails has revealed more about the high-level exchange of classified information on personal accounts. Among the latest batch of emails released by the State Department is an exchange between Clinton and then-Sen. John Kerry, now secretary of state. Sections are fully redacted, citing classified information – and both Kerry and Clinton were using unsecured, personal accounts.

Further, a 2009 email released to Judicial Watch after a federal lawsuit -- and first reported by Fox News -- suggests the State Department 's senior manager Patrick Kennedy was trying to make it easier for Clinton to check her personal email at work, writing to Clinton aide Cheryl Mills a "stand-alone separate network PC is ... [one] great idea."

"The emails show that the top administrator at the State Department, Patrick Kennedy, who is still there overseeing the response to all the inquiries about Hillary Clinton, was in on Hillary Clinton's separate email network and system from the get-go,"  Judicial Watch President Tom Fitton said.

Kennedy is expected to testify this month before the Republican-led Benghazi Select Committee.