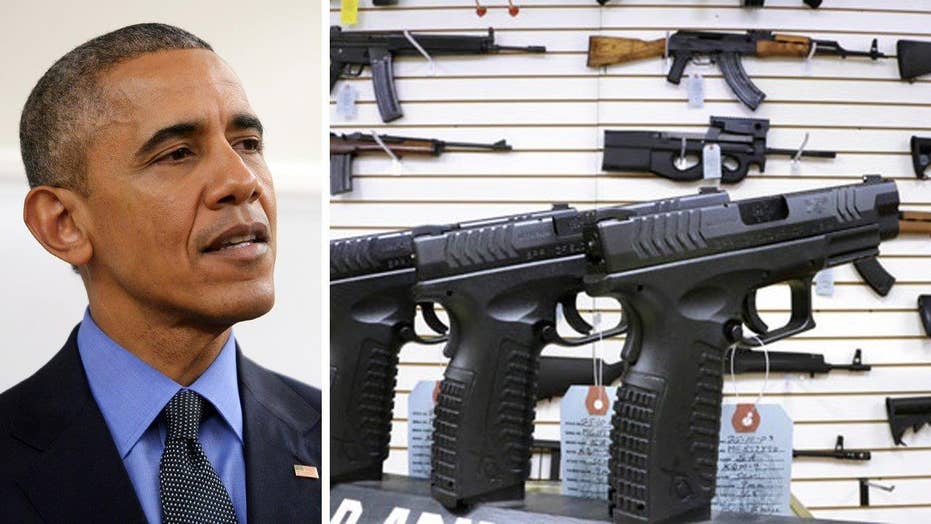 President Obama to use executive action to tighten gun laws

The National Rifle Association, the country’s most influential gun-rights supporter, is challenging President Obama’s new plan to use his presidential powers to tighten firearms laws, calling it a “political stunt” that fails to increase public safety.

Obama said this weekend that he’ll meet Monday with Attorney General Loretta Lynch to discuss his “options” toward curbing gun violence, after ordering his White House team several months ago to identify “new actions” that he can take.

The president also said that he’s taking action because Congress has failed to act. He is expected to use so-called executive orders to tighten federal laws -- with a focus on small-scale firearms sellers and background checks for gun buyers, according to Politico.

"President Obama failed to pass his anti-gun agenda though Congress because the majority of Americans oppose more gun-control,” NRA spokeswoman Jennifer Baker said in response late Saturday. “Now he is doing what he always does when he doesn’t get his way, which is defy the will of the people and issue an executive order.”

Obama said Friday that Congress has “done nothing” and declared that he has “unfinished business.”

“I get too many letters from parents and teachers and kids to sit around and do nothing,” he said in a weekly address from Hawaii, from which he’ll return next week after a two-week family vacation.

The anticipated changes would require the small-scale gun sellers to submit background checks for potential buyers but such changes are not expected to completely close the so-called “gun show loophole,” which allows for firearm purchases at such venues without a check.

Obama on Friday pointed out that his new plan follows the third anniversary of the 2012 mass shooting at Sandy Hook elementary school, in Newtown, Conn., in which a deranged gunman killed 20 children and six adults.

However, the Obama-driven effort to tighten gun laws in the aftermath of the massacre failed to get enough support for passage from Senate Democrats and Republicans.

“All across America, survivors of gun violence and those who lost a child, a parent, a spouse to gun violence are forced to mark such awful anniversaries every single day,” Obama said. “Yet Congress still hasn’t done anything to prevent what happened to them from happening to other families.”

The president’s course of action will purportedly follow recommendations from Everytown, the gun-control nonprofit led by billionaire, former New York Mayor Michael Bloomberg. Obama's action will also result in a rematch with the NRA, the group that led the successful attempt to defeat Obama’s post-Sandy Hook efforts.

“Three years ago, a bipartisan, commonsense bill would have required background checks for virtually everyone who buys a gun,” Obama said Friday. “This policy was supported by some 90 percent of the American people. It was supported by a majority of NRA households. But the gun lobby mobilized against it. And the Senate blocked it.”

Baker on Saturday said Obama’s renewed effort is “nothing more than a political stunt to appease anti-gun billionaire Michael Bloomberg and will do nothing to increase public safety.”

Existing law states those who sell guns with the “principal objective of livelihood and profit” have to get a dealer’s license through the Bureau of Alcohol, Tobacco, Firearms and Explosives. That means they also have to conduct a background check on buyers no matter where they sell, including online or at a gun show.

In 2014, the ATF proposed that federal officials be notified about lost firearms, but the gun industry successfully argued that voluntary reporting was sufficient.