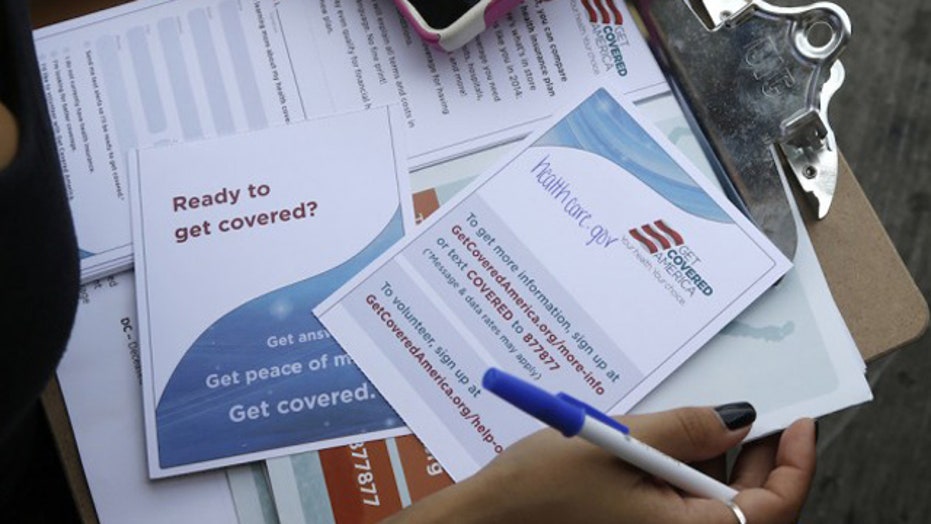 WASHINGTON – A new wave of insurance mega-mergers is fueling fears that ObamaCare is crushing competition. Despite initial claims that the law would bring down costs, Republican critics and others say it's driving the industry to consolidate -- which could end up costing consumers more.

The concern, growing rapidly, is there may only be a few powerful operators still standing while smaller players are driven out of business. The billion-dollar deals accelerated following the Supreme Court's ruling that kept Affordable Care Act subsidies in place.

Whether that's coincidence remains to be seen. But conservatives worry the health law, which requires companies to insure virtually anyone, puts pressure on firms to join forces. To survive, insurers must spread fixed costs over more customers. The bigger they are, the easier it will be to meet ObamaCare-imposed caps on operating costs and boost profits.

The insurance giants claim the mergers will let them operate more efficiently, but others see the potential for rising premiums.

"[ObamaCare] eliminates many of the essential competitive checks remaining in the American health care system," Christopher Pope, a scholar at The Heritage Foundation, wrote. "Because the law relies so heavily on unfunded regulatory mandates to finance the benefit structure, it is obliged to strengthen the power of incumbent providers to prevent targeted competition from eliminating their profit centers."

The latest announcement came Friday when Anthem Inc. announced it agreed to acquire rival Cigna Corp. for $48.4 billion. If approved, the new insurance giant would have an estimated revenue north of $115 billion and serve the health needs of more than 53 million people.

The Anthem-Cigna news comes on the heels of another mega-merger announced earlier this month, when Aetna Inc. agreed to buy Humana for $37 billion.

If both mergers go through, only three major players in the U.S. insurance industry would be left competing for customers: Anthem, Aetna and UnitedHealth.

Senate Majority Leader Mitch McConnell, R-Ky., earlier this month pointed the finger at ObamaCare for the developments. Goodlatte's hearings, meanwhile, will explore the role ObamaCare has had in shaping consolidations and the consequences American consumers may face.

"A concern that I have raised time and again is that, in the health care marketplace, the will of the market is being displaced by the judgment of the federal government," Goodlatte said. "That fear was realized when ObamaCare was enacted into law and we are seeing its tangible effects today."

Democrats, though, argue that insurers have been merging since long before the Affordable Care Act. Reps. John Conyers, Jr., D-Mich., and Hank Johnson, D-Ga., said in a statement that the law, "in combination with vigorous antitrust enforcement, can assist in alleviating some of the problems that are the result of decades of too little competition by instead  fostering competition with existing insurers and allowing for new and innovative players to enter the market."

And Edmund Haislmaier, another Heritage scholar, says the companies likely have been looking to trim costs and boost profits since before ObamaCare.

President Obama's health care overhaul was designed to generate more business for insurers because most Americans were required to have health coverage. However, the law also put pressure on industry profits with various mandates.

A recent analysis in The Economist suggested size does matter when it comes to insurance companies. "Scale will be needed to win the best deals from a hospital sector that has already raised its bargaining power through mergers," the report said. "The insurers with the most customers will be able to negotiate the best deals with the providers of care. Big insurers may also be able to negotiate better deals for drugs."

Dr. Scott Gottlieb, a resident fellow at American Enterprise Institute, told CNBC it is only a matter of time before participants feel the pinch. "Health insurance costs [to consumers] haven't gone up because the plans are being hollowed out," he said, arguing people are getting less coverage than they used to.

"Eventually, the rising costs because of the monopolization of the hospitals is going to catch up," Gottlieb, who served as an adviser at the Centers for Medicare and Medicaid Services in 2004, said.

Assistant Attorney General Bill Baer, who heads up the Justice Department's antitrust division, told Bloomberg TV that he would assess the industry as a whole and given the surge of deals, would make sure competition is preserved.