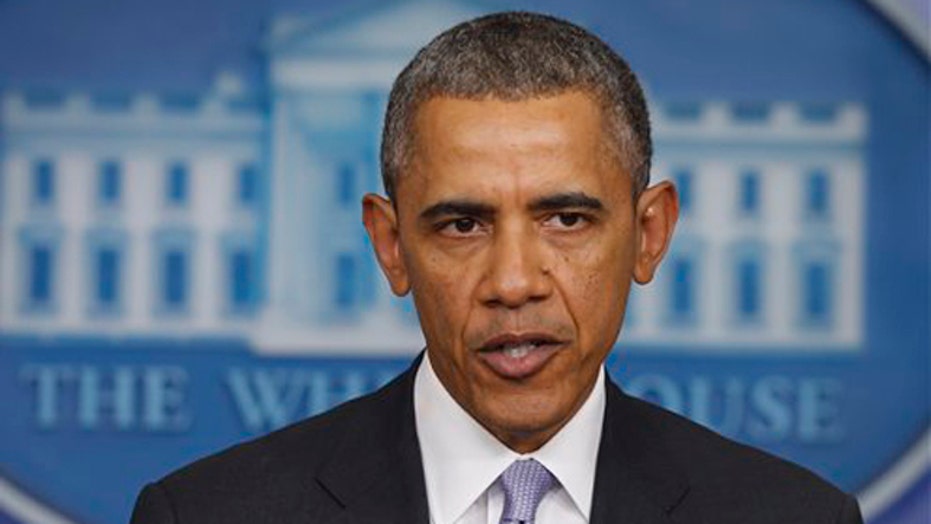 President notes 'there will be costs'

President Obama said Friday that the U.S. government is "deeply concerned" by reports of Russian "military movements" inside Ukraine, warning that any violation of Ukraine's sovereignty would be "deeply destabilizing."

"There will be costs for any military intervention in Ukraine," he said, without specifying what those costs might be.

But a senior U.S. official told Fox News the Pentagon has not prepared "any military contingencies" for Ukraine.

Obama spoke Friday amid reports that suspected Russian soldiers had landed at a military base in the Crimean peninsula. Officials told Fox News they see "evidence of air and maritime movement into and out of Crimea by Russian forces."

Later Friday, Mike Rogers, chairman of the House Select Committee on Intelligence, issued a statement saying, "It appears that the Russian military now controls the Crimean peninsula.  This aggression is a threat not only to Ukraine, but to regional peace and stability.  Russia’s latest action is yet another indicator that Vladimir Putin’s hegemonic ambitions threaten U.S. interests and allies around the world."

Obama said the situation is fluid but warned Russia against intervening.

"We are now deeply concerned by reports of military movements taken by the Russian Federation inside of Ukraine," Obama said. "It would represent a profound interference in matters that must be determined by the Ukrainian people."

Obama's statement comes as his administration is expressing growing concern over Russian intentions in Ukraine. Secretary of State John Kerry delivered a blunt warning Friday to Moscow against military moves in the country's southern Crimea region that could further inflame tensions.

The administration is being pressed by members of Congress to act judiciously but firmly, out of concern that Putin is poised to flex his muscle in a bid to exert influence over the volatile power struggle in the former Soviet republic. House Republican Leader Eric Cantor called reports of Russia military movement of "grave concern."

"It is essential that the United States, our European and NATO partners, and the international community stand up to any aggression," he said. "We need strong American and European leadership now to forestall any further threats to international peace and stability. Russia's leaders must understand that military intervention and further interference in Ukraine's affairs are unacceptable, and would result in significant consequences for Russia."

Among those consequences, he urged sanctions for "Russian individuals and entities who use force or interfere in Ukraine's domestic affairs."