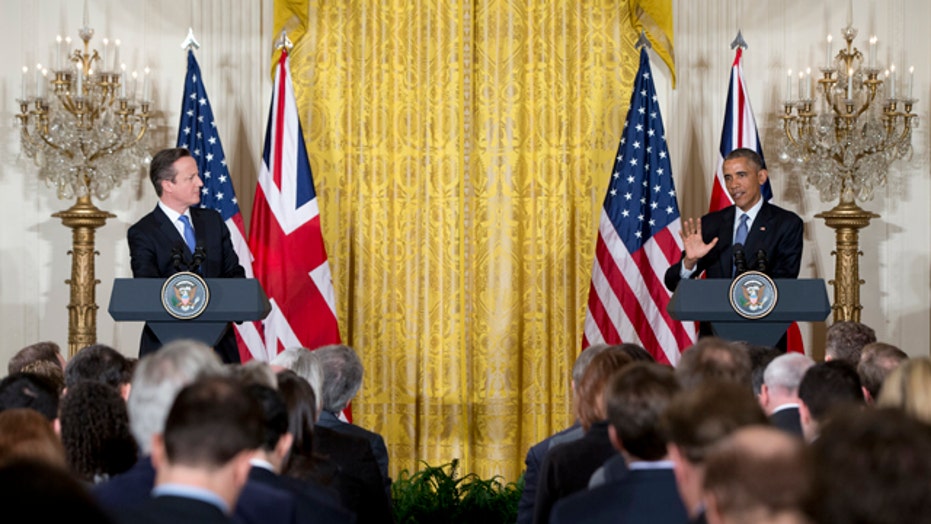 Obama: We count UK as one of our greatest friends, allies

"Radical, death cult of a narrative."

British Prime Minister David Cameron was unsparing in his condemnation of Islamist terrorists on Friday, as he stood beside President Obama in the White House.

Despite the increasingly tough rhetoric from Cameron, French President Francois Hollande and others, Obama continued to describe the enemy as "violent extremism" and "violent terrorism" -- even "nihilism."

The following are key remarks from each world leader. See if you can spot the differences:

"We both recognize that intelligence and military force alone is not going to solve this problem, so we're also going to keep working together on strategies to counter violent extremism that radicalizes recruits and mobilizes people, especially young people, to engage in terrorism."

"We also look forward to welcoming our British friends to our summit next month on countering violent terrorism, because whether in Europe or in America, a critical weapon against terrorism is our adherence to our freedoms and values at home, including the pluralism and the respect and tolerance that defines us as diverse and democratic societies."

"This phenomenon of violent extremism, the ideology, the networks, the capacity to recruit young people, this has metastasized and it is widespread, and it has penetrated communities around the world."

"I do not consider it an existential threat. As David said, this is one that we will solve. We are stronger. We are representing values that the vast majority of Muslims believe in -- in tolerance and in working together to build, rather than to destroy."

"And so, you know, this is a problem that causes great heartache and tragedy and destruction, but it is one that ultimately we're going to defeat. But we can't just defeat it through weapons. One of the things that we spoke about is how do we lift up those voices that represent the vast majority of the Muslim world, so that that counter-narrative against this nihilism is put out there as aggressively and as nimbly as the messages coming out from these -- these fanatics."

"We know what we're up against. And we know how we will win. We face a poisonous and fanatical ideology that wants to pervert one of the world's major religions, Islam, and create conflict, terror and death. With our allies, we will confront it wherever it appears."

"We will deploy additional intelligence and surveillance assets to help Iraqi forces on the ground, and we will ensure they are better trained and equipped to counter explosive devices. But most important of all, we must also fight this poisonous ideology starting at home."

"We do face a very serious Islamist extremist terrorist threat in Europe, in America, across the world. And we have to be incredibly vigilant in terms of that threat."

"It means countering this poisonous, fanatical death cult of a narrative that is perverting the religion of Islam."

"But here's, I think, the really determining point: You can have, tragically, people who have had all the advantages of integration, who've had all the economic opportunities that our countries can offer, who still get seduced by this poisonous, radical, death cult of a narrative."

"So, let's never lose sight of the real enemy here, which is the poisonous narrative that's perverting Islam. That is what we have to focus on, recognizing that, of course,  we help ourselves in this struggle if we create societies of genuine opportunity, if we create genuine integration between our communities."