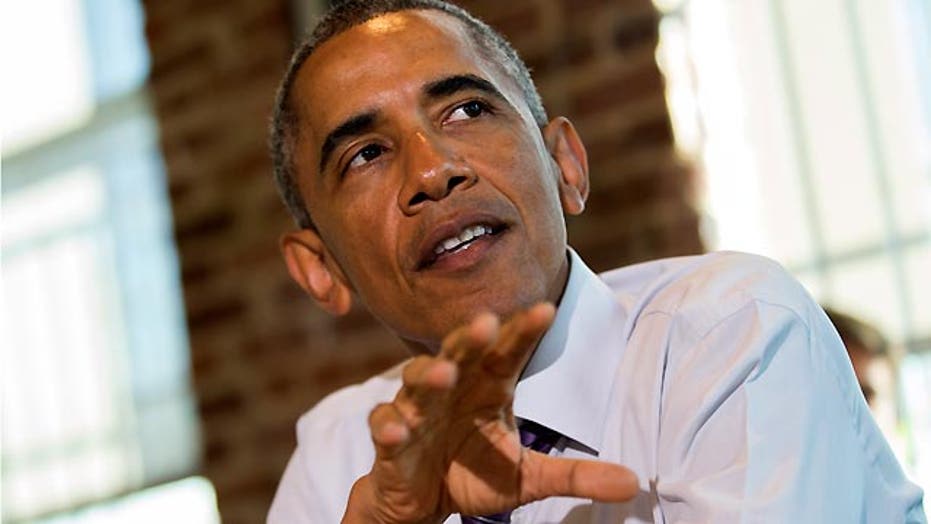 RNC Chair Reince Priebus on the tone a 'cooperative' president is setting with the new Congress, his recent re-election to a third term, and RNC announcements for debate locations and networks

President Obama told Senate Democrats in a private meeting that he plans to "play offense" against the new GOP-controlled Congress, showing little hesitation about clashing with Republicans for the next two years.

Congressional sources confirmed the comments, made Thursday during a summit in Baltimore, as Republican lawmakers held their own summit in Hershey, Pa.

The president, who already has issued a string of veto threats in the opening days of the 114th Congress, indicated he's prepared to keep opposing legislation he finds objectionable.

That bill is being written by Democratic Sen. Robert Menendez, of New Jersey, and Republican Sen. Mark Kirk, of Illinois. Sen. Bob Corker, R-Tenn., also indicated Thursday, at the GOP retreat, that Congress would seek to have a vote on any nuclear deal the U.S. and its allies strike with Iran.

Politico reported that Obama told Democrats in Baltimore he would oppose the Iran sanctions legislation. According to The New York Times, Menendez and Obama also traded "sharp words" over the issue at Thursday's meeting. The Democratic senator reportedly warned the president that, if nuclear talks failed, sanctions could not be imposed quickly without additional congressional action.

Further, the president reportedly vowed Thursday to press ahead with more executive actions, despite a veritable uprising from congressional Republicans over that strategy.

Earlier this week, House Republicans voted to reverse his directives from last November sparing millions of illegal immigrants from deportation and offering them work permits.

Though Obama met with congressional leaders of both parties at the White House earlier this week, offering a brief show of bipartisanship, the first two weeks of the congressional session point to a turbulent two years ahead -- particularly as the session runs into the start of the 2016 presidential campaign.

Obama has threatened to veto the immigration legislation and the Keystone legislation, in addition to a bill easing financial regulations and more.

Asked Thursday about the White House meeting with the president, House Speaker John Boehner said they had a "nice" and "polite" conversation.

"But I don't know that we learned a whole lot," he said.

Boehner said it's "too early to tell" whether the dynamic has changed.

"I'm the guy born with the glass half-full. And I believe hope springs eternal," he said. "The American people want us to find a way to address their concerns. That was the big message out of the elections. You hear it from our members on both sides of the Capitol. I'm hoping the president heard the same message."