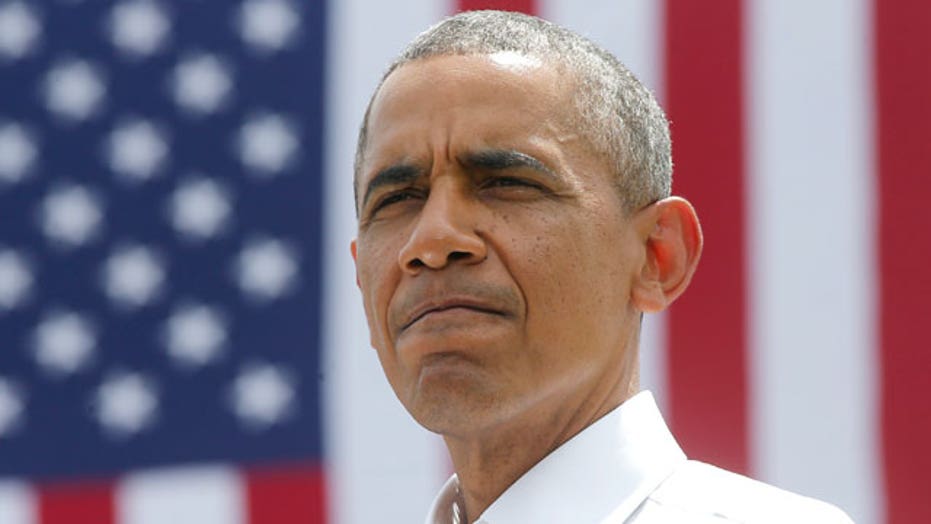 President Obama renewed his call for immigration legislation at an Independence Day citizenship ceremony for service members, but once again signaled he would take action on his own if Congress doesn't pass a bill.

"I'm going to keep doing everything I can do to keep making our immigration system smarter and more efficient," Obama said.

The president spoke at a White House naturalization ceremony on Friday for members of the U.S. military and their spouses. He touched on the hot-button immigration debate after, days earlier, vowing to proceed with executive actions in the absence of congressional legislation.

Republicans openly voiced concern that the decision could exacerbate problems with the current immigration system, not the least of which is a surge of illegal immigrant minors streaming across the U.S.-Mexico border in Texas. Some are worried Obama will seek to further ease deportations for some already in the U.S. -- though the president has requested additional authority to speed up deportations for minors caught crossing the border.

Obama indicated Friday he still would prefer to see legislation, saying reform is needed to keep attracting the "best and the brightest."

A total of 25 military members, veterans and their spouses were part of the ceremony on Friday.

The group included 15 active-duty service members from the Army, Navy, Air Force and Marines, along with two veterans, one reservist and seven spouses, the White House said. They represent 15 countries.

Meanwhile, Obama is taking heat over a planned visit to Texas next week, as he has no public plans to visit the border. Republicans are calling on him to take a firsthand look at the immigration emergency at the U.S.-Mexico line.

"If he doesn't come to the border, I think it's a real reflection of his lack of concern of what's really going on there," Texas Gov. Rick Perry said.

The White House says Obama currently has no plans to visit the border when he travels to Texas, primarily to fundraise for Democratic congressional candidates. A trip to the region could result in awkward optics for the president, who would be unlikely to meet with youngsters he's seeking to deport and would risk upsetting immigration advocates who oppose the deportations if he were to meet with border patrol agents or other law enforcement.

Administration officials say that Perry and other Republicans are merely trying to score political points rather than working to resolve a major problem. But the political concerns aren't so easily dismissed for Obama.

The border crisis has put him in the difficult position of asking Congress for more money and authority to send the children back home at the same time he's seeking ways to allow millions of other people already in the U.S. illegally to stay.

After the naturalization ceremony on Friday, the first couple was planning to spend the Fourth of July with service members they invited to the White House for an all-American barbecue on the South Lawn and choice seating for the fireworks on the National Mall.

Friday's ceremony also recognized internationally known celebrity chef Jose Andres for outstanding achievements by a naturalized U.S. citizen. Andres, who is 44 and was born in Spain, became a citizen last November and also will mark his first July Fourth as a citizen.

Obama also has another reason to celebrate on Friday. His oldest daughter, Malia, turned 16.