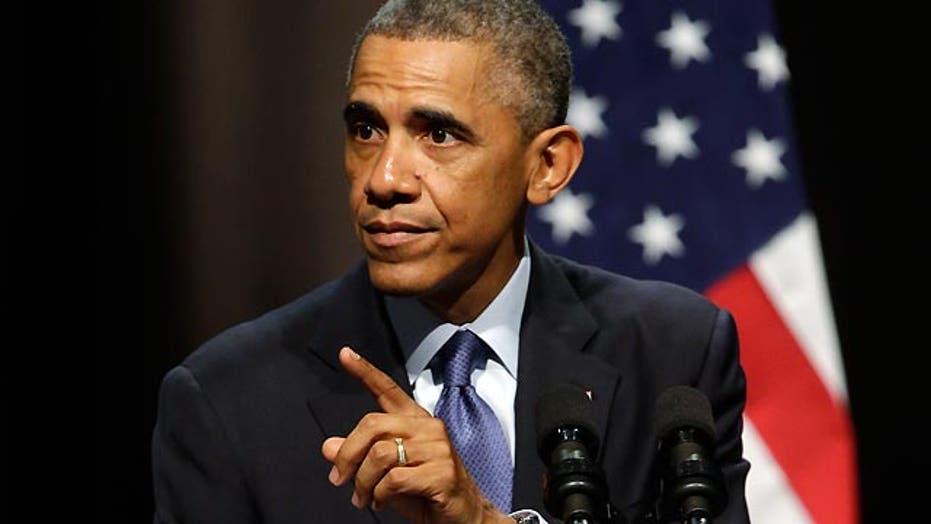 'Off the Record,' 10/2/14: President Obama likes to play the blame game and blaming Fox News was red meat for his base. But he has to realize he doesn't hurt us and only diminishes his office.

President Obama is taking heat for mocking Fox News over its coverage of his health care overhaul.

The president took the shot Thursday during a speech at Northwestern University in Illinois, as he defended his six-year record in office on the economy, on health care and on the budget.

He claimed fewer Republicans are "preaching doom on deficits" because deficits are lower.

On ObamaCare, he added: "There's a reason fewer Republicans, you hear them running about ObamaCare --- because while good, affordable health care might seem like a fanged threat to the freedom of the American people on Fox News, it's turns out it's working pretty well in the real world."

But Tim Graham, director of media analysis with the Media Research Center, slammed the president for his remarks.

"Now ask yourself: Did President George W. Bush ever trash a news network like that?" he wrote on NewsBusters. "Did he ever make a major speech and take a whack at Keith Olbermann? Republicans avoid that, because you can upset the entire liberal media with a remark like that.

Graham recalled how Bush was pilloried in the media after being caught on a hot mic calling a New York Times reporter a "major league a-hole."

"ABC and NBC led off their nightly newscasts with that mini-scandal," Graham noted.

The president's comments were picked up widely on media news sites, including MediaBistro.com -- one commenter on their article said: "If only this man hated terrorists as much as he hated FOX News ...."