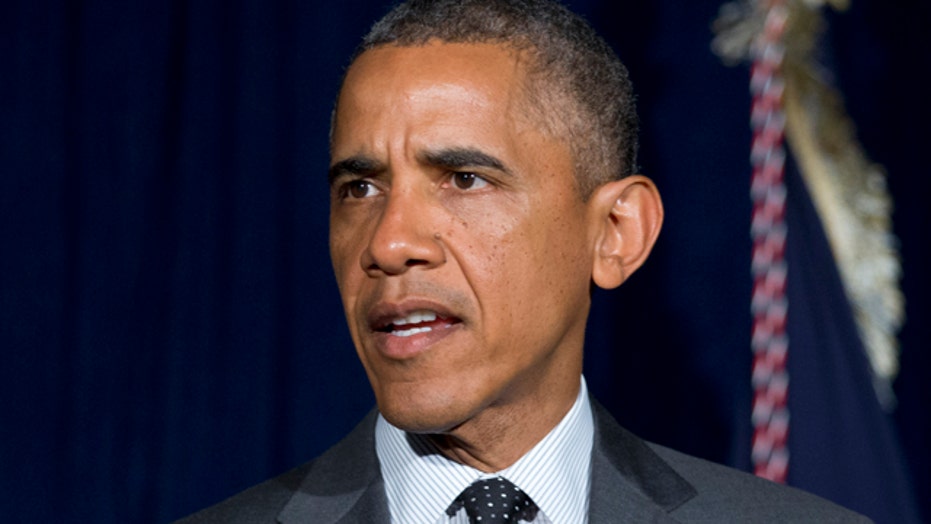 President Obama is facing criticism from his own party for --- a day after requesting nearly $4 billion to address the influx of illegal immigrant minors --- rebuffing invitations to see the crisis first-hand while he's visiting Texas to raise money for Democrats.

However, Obama said in a late evening press conference Wednesday he did not go to the border because he is interested in finding a real solution to the crisis.

"This is not theater," he said, adding, "I’m interested in solving the problem."

Under pressure, the president met with Texas Gov. Rick Perry and other local leaders in Dallas Wednesday evening, in between a packed schedule of fundraisers. But his itinerary, which has him traveling from Denver to Dallas to Austin, still does not include a stop along the border.

Obama said his meeting with Perry was "constructive" and he has no opposition to any of the solutions Perry proposed.

Obama said if Congress passes the emergency funding request, the government will have resources to take some of the steps Perry recommended. He said the problem is fixable if lawmakers are interested in solving it, but that if the preference is for politics, it won't be solved.

He urged Perry to use his influence with the Texas congressional delegation to pass the funding.

“If the Texas delegation is prepared to move we can get these things done next week," he said.

"Texans do not need a lecture from a man who refuses to even see the crisis firsthand. President Obama can fundraise and issue statements, Texans will work to solve the problem," he said in a statement.

Perry said in a statement after the meeting that he is urging Obama to fulfill the requests he made to stem the tide of illegal immigrants.

"Securing the border is attainable, and the president needs to commit the resources necessary to get this done," he said.

Other Texas lawmakers said that fact Obama is not going to the border is unacceptable.

"I want to thank him for meeting with Governor Rick Perry, but the only thing is that meeting is 500 miles away from the border," Rep. Henry Cuellar, D-Texas, told Fox News. "He can get on Air Force One, be there in a half an hour ... right after he finishes his fundraising in Texas."

Cuellar questioned who he was even meeting with in Dallas, saying he needs to speak with "border leaders."

"One of the things he needs to do is roll up his sleeves, go down there to the border, talk to the community leaders there," he said.

Sen. Ted Cruz, R-Texas, piling on, tweeted a map showing the president how to get from Dallas and Austin to the border.

"If President Obama wants to have a real border meeting with @GovernorPerry, here are a couple suggested detours," he tweeted.

The Obama administration insists it is tackling the border crisis with all available resources, and is calling on Congress to approve the $3.7 billion emergency funding for the crisis.

"I think the steps that this government has announced not just today, but over the last week or so, are indicative of our proactive approach to dealing with this situation," White House Press Secretary Josh Earnest said Tuesday, noting that the president has already directed resources to be moved from the interior to the border.

Administration officials charged with overseeing the response to the influx testified before a Senate committee on Wednesday on what's being done.

"We have not been what I would say successful yet" in ensuring that the unaccompanied kids are processed by the Border Patrol as quickly as required, Federal Emergency Management Agency administrator Craig Fugate testified.

"The children continue to come across the border. It's a very fluid situation," Fugate said. "Although we have made progress, that progress is oftentimes disrupted when we see sudden influxes of kids coming in faster than we can discharge them, and we back up."

Gil Kerlikowske, the U.S. Customs and Border Protection commissioner, said that the number of children picked up since October now stands at 57,000, up from 52,000 in mid-June, and more than double what it was at the same time last year.

The situation, Kerlikowske said, "is difficult and distressing on a lot of levels."

Cuellar speculated that Obama is "caught in a dilemma," not wanting to seem like he "owns the problem."

Cuellar has been among the most outspoken Democrats on the issue in recent days, describing the administration as being behind the curve on the crisis and voicing concern this could become the president's "Katrina moment" -- a reference to then-President George W. Bush's handling of Hurricane Katrina.

The congressman would not say who called him.