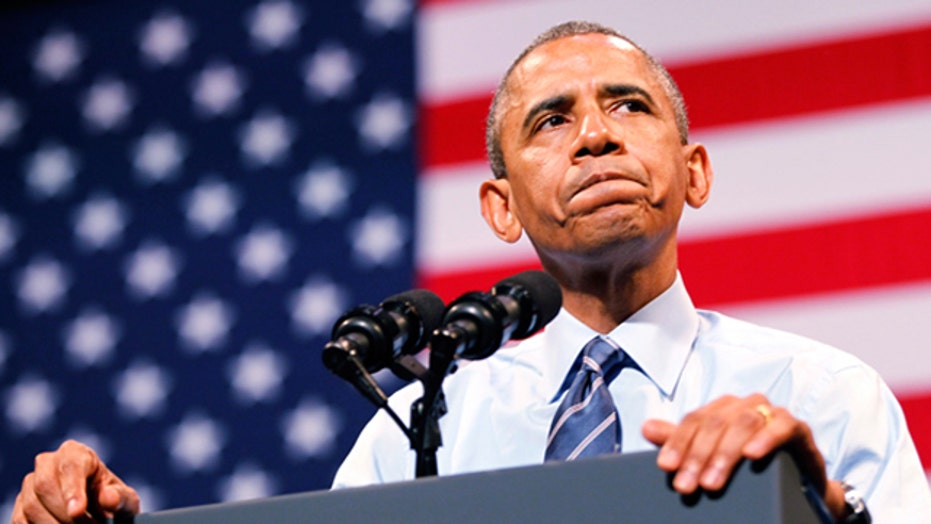 PR problem for the president?

President Obama began his three-day West Coast fundraising tour in Seattle with an admission that mushrooming global crises were adding anxiety to an American public already concerned about the economy.

"Part of people's concern is just the sense that around the world the old order isn't holding and we're not quite yet where we need to be based on the new order," said Obama, who later cautioned against letting those anxieties lead to cynicism and a lack of interest in democracy.

"People who really need government to work for them on their behalf, they withdraw, they opt out, and that makes government even more dysfunctional," he said.

The president already has taken heat for making time for a burger stop and fundraisers last week shortly after Malaysia Airlines Flight 17 was downed over Ukraine, killing hundreds. While the president repeatedly has addressed the tragedy in public, he also spent his Sunday playing golf at Fort Belvoir.

Later Tuesday, Obama will attend a Democratic Party fundraiser in Seattle, before catching Air Force One to San Francisco. He'll end the three-day swing later this week in Los Angeles.

Asked about Obama's fundraising last week in New York, Earnest said it was not a mistake and noted that the president made calls to the leaders of Ukraine and Malaysia amid the Flight 17 tragedy.

"When the president travels, he travels with an array of staff and advisers and communications equipment that allows him to do his job from wherever he happens to be," Earnest said. "And if it becomes clear that there's a need for him to come back to the White House in order to fulfill those functions, then we'll make a change in his schedule. Right now, it's not apparent that that's the case."

But Republican critics have questioned the president's stay-the-course strategy on fundraisers.

In response to the White House defense of its own itinerary, the Republican National Committee tweeted: "The White House still feels Obama's choice of burgers & fundraisers over responding to crises was the right one."

Aside from the Malaysia Airlines tragedy and deliberations over how to respond to the suspected Russian connection, the administration continues to grapple with the surge of illegal immigrant minors along the U.S.-Texas border, and with the mounting death toll in the war between Israelis and Palestinians in the Gaza Strip.

After Texas Gov. Rick Perry announced the deployment of National Guard personnel to the border in his state to deal with the surge, Rep. Louie Gohmert, R-Texas, ribbed the president for his schedule.

"The fact is if the president weren't so busy playing golf or pool, he would know the integration has been happening," Gohmert told Fox News, referring to collaboration along the border between various Border Patrol and security officials.

Obama did abandon one idea for the trip, however. The White House had been in touch with late-night talk show host Jimmy Kimmel about a presidential appearance on his show during the stop in Los Angeles, but is not going forward.

"We elected not to do it this time, but hope we can arrange to do it in the near future," a White House official said.

But on the fundraising trail, Obama remains a potent draw among the Democratic Party's wealthy donors, who pay up to $32,400 to be in intimate settings with the president.

The fundraising highlight of the trip will be a Democratic National Committee event Wednesday at the Beverly Hills home of Shonda Rhimes, the producer of the ABC series "Scandal," a drama set in modern-day Washington. Kerry Washington, who plays the lead role in the show, is among the hosts.

So far this 2013-14 election cycle, Obama has attended 73 fundraising events for Democratic Party groups. During the 2009-10 midterm cycle, when Republicans won control of the House, Obama attended 98 fundraisers, according to CBS News White House reporter Mark Knoller, who keeps detailed records of presidential travels and events.

Obama has outpaced his predecessor in fundraising, having attended 395 fundraisers during his presidency as of this week. According to Knoller's statistics, then-President George W. Bush had attended 217 at the same point in his second term.

The 395 is more than Bush attended during his entire presidency.

Obama has devoted much of his effort to the Democratic National Committee, which last month raised $9 million and cut its debt to $3 million from a one-time high of $23 million. Obama also will raise money for the Democratic Congressional Campaign Committee, the political arm of the party that assists Democratic House incumbents and candidates.

While the House is expected to remain in Republican hands after the election, the fate of the Democratic-controlled Senate is much more in question, raising the stakes for fundraising.

Obama has at least one bit of policy-driven business set aside for the trip. In Los Angeles on Thursday he plans to go to a community college to draw attention to jobs training, particularly for work requiring specialized skills, like health care.