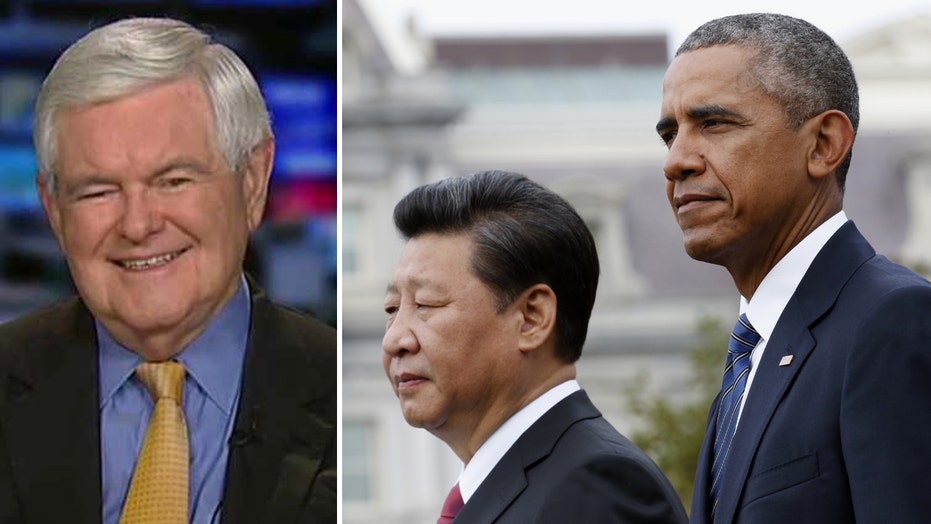 Gingrich slams US China policy: All weakness, no achievement

Former speaker of the House says he can't understand what the U.S. gets from a visit from the Chinese president

WASHINGTON – President Obama is banking that tough talk on suspected Chinese cyberattacks will yield changes in Beijing's behavior and justify a decision to hold off penalizing China.

American officials say China is privately showing signs of taking the matter more seriously and noted comments from President Xi Jingping this week that he's willing to work with the U.S. on cybersecurity.

Obama and Xi were to meet over dinner Thursday night and talk again at the White House on Friday.

Hacking attacks on U.S. companies and government agencies have become a growing source of tension between the U.S. and China.

The U.S. has been preparing sanctions against China in retaliation for its suspected theft earlier this year of personal data of millions of current and former U.S. government employees. But officials decided against levying the penalties ahead of Xi's visit — in part because embarrassing the optics-conscious Chinese could have impacted potential cooperation during the talks that begin Thursday night.

However, some analysts say China will only see an incentive to change its cyber behavior if it feels real consequences.

"We can choose to make this an area of competition, which I guarantee you we'll win if we have to," Obama told business leaders last week. "Or, alternatively, we can come to an agreement in which we say, 'This isn't helping anybody. Let's instead try to have some basic rules of the road in terms of how we operate.'"

Nick Rossmann, a program manager for the security company FireEye Inc., said his group is tracking about two dozen organizations in China that use malware to breach U.S. organizations and companies. He cited defense, health care and high-tech firms as among the most frequently targeted companies.

"It's really a range across American industry that we see this economic espionage occurring in," Rossmann said.

The complaint from those companies is that they spend years developing innovative products while companies in China are able to launch comparable products without that same level of effort and cost, Rossmann said.

Ben Rhodes, a deputy national security adviser at the White House, said the U.S. will make the appeal during talks that China's failure to crackdown on cyber spying could alienate a business community that has been a strong backer of deepening U.S.-China relations, and could also antagonize U.S. lawmakers into taking more aggressive action.