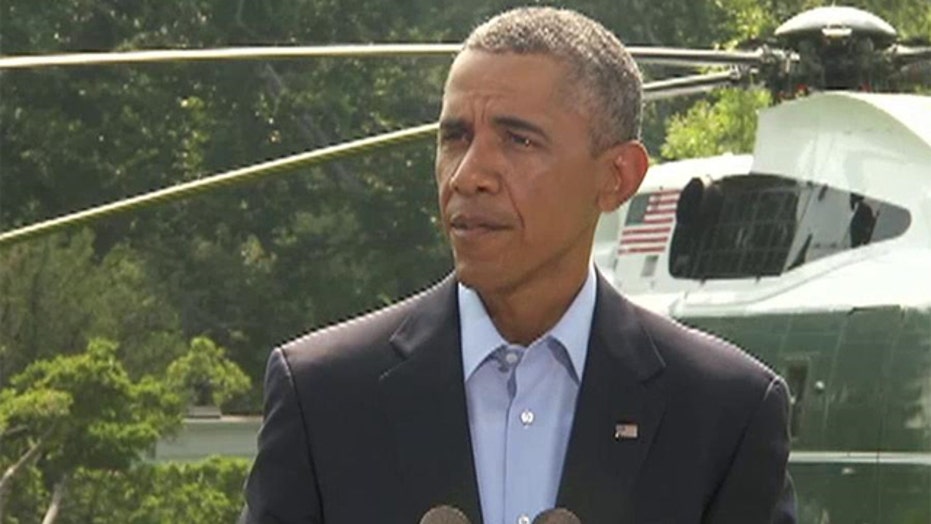 President Obama updates the nation on the situation in Iraq

'I think this is going to take some time'

President Obama braced Americans on Saturday for a sustained military involvement in Iraq, saying the United States is prepared to continue with air strikes to protect U.S. diplomats and citizens and others under attack from the Islamic State terror group.

"I don't think we’re going to solve this problem in weeks," the president said on the South Lawn of the White House. “This is going to be a long-term project.”

Obama laid out a three-part strategy for heightened U.S. involvement in Iraq, one day after U.S. aircraft began launching air strikes on military installations belonging to the Islamic State (IS), the militant group formerly known as ISIS, and dropping humanitarian aid for the estimated thousands who have fled from the terror group into the Sinjar mountains, in the northern region of the country.

The president said his immediate goals are to help those stranded on the mountain, provide safe passage for them to return to the region around the Kurdish regional capital Irbil and to continue to help Iraq establish a functional and inclusive government.

However, Obama, who departed after the speech for a one-week family vacation on Martha’s Vineyard in Massachusetts, gave no specific timetable for his plan.

"Even as we continue to deal with the immediate situation, we seek a broader solution," he said. "There's not going to be a U.S. military solution to this problem."

The Islamic State extremists have captured hundreds of Yazidi women, according to an Iraqi official, while thousands of other civilians, including Kurds and Christians, have fled into the mountains and elsewhere as the militants in recent days have seized a string of northern towns and villages.

Yazidis belong to ancient religion seen by the Islamic State group as heretical. The extremist group considers Shiite Muslims apostates, and has demanded Christians either convert to Islam or pay a special tax.

Obama acknowledged Saturday that providing a "safe corridors" for those who face a potential “genocide” will be difficult.

"That may take some time," he said. "Moving them is not simple in this unstable environment."

The president said England and France have agreed to join in the humanitarian effort and acknowledged the speed of the militant group’s surge on Irbil surprised U.S. intelligence officials.

Obama said Iraqi security forces need to revamp to effectively mount an offensive, which requires a government in which citizens and the Iraqi military have confidence.

He also said Iraq needs a prime minister -- an indication that he has written off the legitimacy of the incumbent, Nouri al-Maliki.

Obama said he won't close the U.S. Embassy or the Irbil consulate, which means American troops and diplomats will remain on the ground and need protection. He said where U.S. personnel are threatened, it's his obligation as commander in chief to protect them.

The president also sharply rejected the premise that it was his decision to pull out from Iraq and said it was because Iraqis didn't want U.S. troops there.