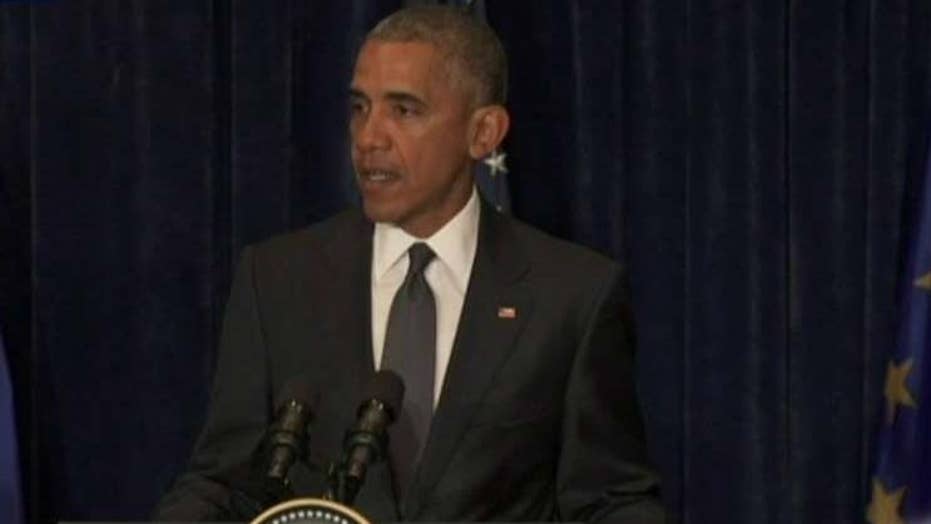 Late Friday, the White House announced Obama would cut short his current European trip by a day and visit Dallas early next week.

The attack, which also injured at least seven, was carried out during an anti-police brutality protest. It was the nation's deadliest day for law enforcement since 9/11.

Obama, speaking at the start of a NATO summit in Poland, decried the “vicious, calculated and despicable attack.”

He vowed “justice will be done” and voiced support for the “extraordinarily difficult job” of America’s law enforcement officers.

“Today is a wrenching reminder of the sacrifices that they make for us,” Obama said.

But before wrapping his remarks, the president once again returned to the issue of gun laws.

“We also know that when people are armed with powerful weapons, unfortunately it makes attacks like these more deadly and more tragic, and in the days ahead we’re going to have to consider those realities as well,” Obama said.

Dallas Police Chief David Brown said it appears multiple rifle-toting suspects were working together, "triangulating at different positions" as protesters marched through the streets of Dallas. Three people were in custody and one suspect dead.

The attack comes on the heels of a string of failed votes in Congress to tighten gun regulations, particularly for those on terror-related watch lists. The latest surge of votes followed the deadly terror massacre at an Orlando nightclub last month.

Lawmakers, though, still have not been able to come together on a piece of compromise legislation. Democrats have objected strongly to the stalemate, even staging a protracted House floor sit-in.

House Democrats are likely to ramp up their calls for gun restrictions following the Dallas murders as well. Members of the Congressional Black Caucus, at a previously scheduled press conference Friday morning, continued to urge legislation on the issue.

Protesters also held a police shooting rally by the U.S. Capitol Thursday night. At the same time, Fox News is told House Democrats are mindful of further stoking the embers of an already volatile situation.

Former 2016 presidential candidate Mike Huckabee said the “common denominator” is “not the weapon” – but the “anarchy in the heart of the person who’s … committing the crime.”

Meanwhile, lawmakers across the country voiced solidarity with the people of Dallas and law enforcement community.

“Tonight I join the people of Dallas, Texas, in praying for the safety of the Dallas Police Officers and all who are in the downtown are this evening,” Texas Republican Rep. Pete Sessions said in a statement. "Our police officers selflessly put their lives on the line every single day to vigilantly protect our families and communities and it is devastating to think that someone deliberately targeted our law enforcement.”

The 2016 presidential candidates all offered their condolences: