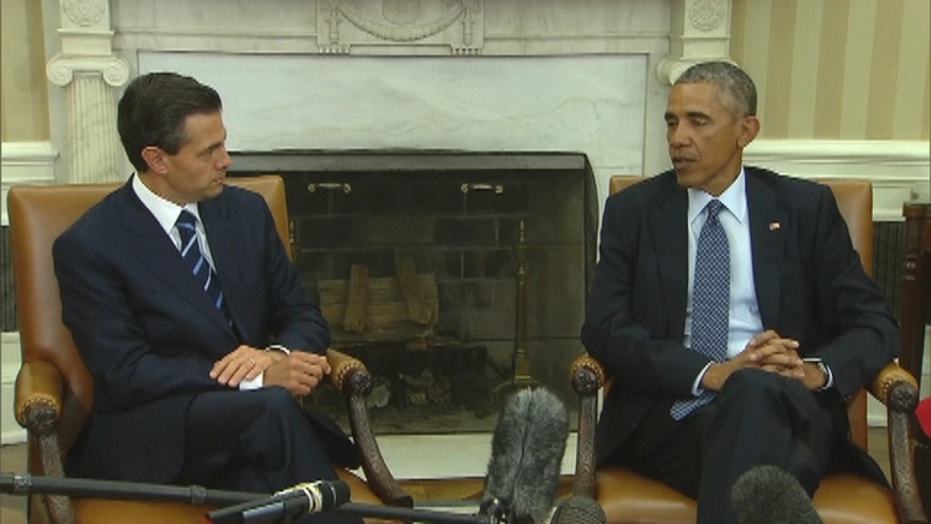 Peña Nieto and Obama speak to press at White House

Despite pressure from protest groups in both the United States and Mexico, it appears that nothing much will change in terms of Washington’s anti-drug support to its southern neighbor following a meeting between President Barack Obama and his Mexican counterpart, Enrique Peña Nieto.

While both world leaders focused more on economics, immigration and foreign policy during their remarks Tuesday following a meeting in the Oval Office, both Obama and Peña Nieto tacitly acknowledged that the U.S. would continue providing money and resources to battle organized crime and pervasive violence.

“Our commitment is to be a friend and supporter of Mexico in its efforts to eliminate the scourge of violence and the drug cartels that are responsible for much of the tragedy inside of Mexico,” Obama said. “We want to be a good partner in that process while recognizing that ultimately it will be up to Mexico and its law enforcement to carry the key decisions that need to be made.”

The U.S. has to date provided $2.1 billion to Mexico to combat drug trafficking in the country under the Mérida Initiative – which is pejoratively known as "Plan Mexico." While the Initiative is loosely modeled after a similar effort in Colombia, many critics claim that it is doing more harm than good – citing as evidence the widespread corruption in Mexico’s civil police forces and a soaring murder rate since its implementation.

"Plan Mexico has been an abject and utter failure," Roberto Lovato, a writer and activist who helped organized the #USTired2 movement which has led protests against U.S. involvement in security efforts in Mexico, told Fox News Latino on Tuesday. "You claim to be fighting the cartels, but you’re giving money to the people who are helping these cartels."

A small group of demonstrators gathered outside of the White House during the meeting of the two presidents to protest the Mérida Initiative and to raise awareness about the 43 students missing from the Raúl Isidro Burgos Rural Teachers' College in Ayotzinapa, in the southern Mexican state of Guerrero, and the alleged collusion between a local mayor, his wife, the municipal police and a drug gang.

“We’ve been following here in the United States some of the tragic events surrounding the students whose lives were lost,” Obama said during his remarks. “President Peña Nieto was able to describe for me the reform process that he has initiated.”

Peña Nieto, however, opted mention only briefly his country’s security situation – thanking Obama for the U.S.’s continued support – and instead focused on the stated goal of his trip: the economy and jobs.

"A few months ago, Peña Nieto would probably have preferred to only come and talk about economic issues and the new migration executive actions, but the situation in Mexico has changed over the last few months forcing his administration to focus on security once again," Jason Marczak, the deputy director of the Adrienne Arsht Latin America Center at the Atlantic Council, said in a press release.

"The U.S. is an important partner for Mexico and that partnership can hopefully be extended through this state visit with new accords announced on security cooperation, specifically assisting Mexico in its judicial reform and furthering agency-to-agency collaboration in tracking down narco-traffickers and stemming the drug trade."

Earlier in the day, U.S. Vice President Joe Biden gathered with a number of Mexican officials for the second meeting of the U.S.-Mexico High-Level Economic Dialogue (HLED), and Peña Nieto reiterated his government’s want to foster even deeper business ties between the two countries.

“Mexico is a trustworthy destination,” he added. “A place where they can invest.”

The two also discussed Obama's shift to what he says is a "more constructive" policy toward Cuba.

Decades of estrangement between the U.S. and the communist island nation has long been a point of friction with Mexico and other Latin American countries that do business with Cuba.

Obama says he'll participate in the Summit of the Americas, a regional meeting taking place in April in Panama. But he says that he will insist that human rights in Cuba be on the agenda.

Peña Nieto applauded the American thaw with Cuba, pledging Mexico will be a "tireless proponent" of good relations between the two countries.