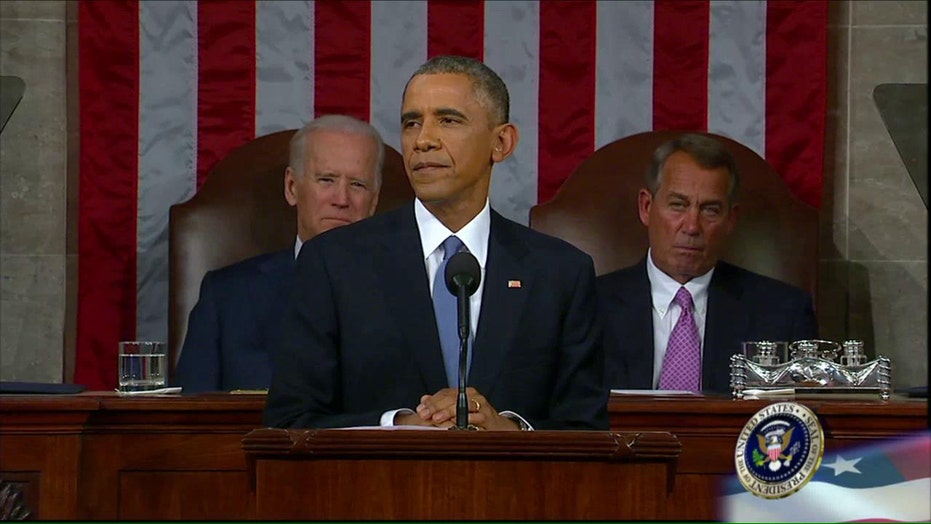 President Obama: 'The shadow of crisis has passed'

State of the Union, Part 1: President notes end of combat mission in Afghanistan, growing US economic recovery and a surge in US energy production

A defiant President Obama staked out a populist agenda Tuesday night for his final two years in office built on what he called “middle-class economics,” while using his sixth State of the Union address to deliver a slew of veto threats challenging the new, Republican-led Congress.

Setting a combative tone with Capitol Hill’s GOP leadership, Obama trumpeted a plan centered on free higher education, new worker protections and a sweeping tax overhaul that hikes rates on top earners to fund credits for the middle class. Far from chastened by Republican gains in the midterm elections, he vowed to defend signature accomplishments from his first six years in office.

“Middle-class economics works. Expanding opportunity works. And these policies will continue to work, as long as politics don't get in the way,” Obama said.

Throughout, Obama hammered the message that the economy, and the country, are bouncing back after the recession and two protracted wars.

“Tonight, we turn the page,” Obama declared, claiming: “The shadow of crisis has passed.”

The address reflected a president disinclined to cede ground in the wake of his party’s midterm losses. While urging lawmakers to join him in pursuing a “better politics” in Washington, the president repeatedly antagonized congressional Republicans. He sprinkled his address with jabs at the “superrich” and the Keystone XL pipeline, and vowed to fight GOP bills that would chip away at ObamaCare, financial regulations and his recent immigration actions.

“If a bill comes to my desk that tries to do any of these things, I will veto it,” Obama said. He issued similar threats with regard to legislation teeing up new Iran sanctions and efforts to roll back environmental regulations.

In an off-script moment, the president even reminded Republicans of his electoral successes. After declaring he had no more campaigns to run, he quipped, “I know because I won both of them.”

Obama, in his address, was promoting a series of programs he previewed in the weeks leading up to it.

Most controversial is a plan unveiled over the weekend imposing more than $300 billion in tax hikes over 10 years – including on investment and inheritance taxes for top earners – to fund tax credit expansions for the middle class, including tripling the maximum child tax credit to up to $3,000 per child. The funding also would pay for an initiative providing free community college for two years for students who keep up their grades (though the White House calls for rolling back a separate college savings tax break).

Referring to long-established entitlement programs like Medicare and Social Security, Obama said “middle-class economics” helps everyone get a “fair shot” when everyone “does their fair share.”

With that pitch, Obama also called anew for Congress to raise the minimum wage. And he called for new measures to guarantee paid sick leave for American workers.

On his college plan, the president said he wants to make two years of community college “as free and universal in America as high school is today.”

While Republicans have questioned the mechanics of the college plan, they have declared his tax proposal a “non-starter” in the new GOP-led Congress.

House Speaker John Boehner described the president’s wish-list Tuesday as “more of the same” and said his approach is hurting, not helping, the middle class.

Sen. Orrin Hatch, R-Utah, said in a statement that the address showed Obama slipping back into his role as “campaigner-in-chief,” pushing higher taxes and more regulations, while issuing “premature veto threats.”

In a pointed swipe sure to anger Republicans, Obama in his address downplayed the jobs impact of the proposed Canada-to-Texas Keystone XL pipeline, without mentioning it by name. Calling for more infrastructure spending, he said: “Let's set our sights higher than a single oil pipeline. Let's pass a bipartisan infrastructure plan that could create more than thirty times as many jobs per year.”

Defending his tax plan, Obama said lobbyists have “rigged” the system with loopholes and giveaways “that the superrich don't need, while denying a break to middle class families who do.”

He called for closing them “to help more families pay for childcare and send their kids to college.”

Yet the president, as part of his tax plan, is calling for ending a tax break for college savings plans known as 529 plans. Under the change, earnings on contributions could not be withdrawn tax-free, as they can be now.

The speech was dominated by economic and domestic issues, though the president did devote several minutes to addressing terrorism and specifically the threat posed by the Islamic State.

After the recent terror attack in Paris, he said “we stand united” with victims of terrorists.

“We will continue to hunt down terrorists and dismantle their networks, and we reserve the right to act unilaterally, as we have done relentlessly since I took office to take out terrorists who pose a direct threat to us and our allies,” he vowed.

On ISIS, though some lawmakers have criticized his current approach, he claimed the current campaign in Iraq and Syria is “stopping ISIL’s advance.” Though airstrikes have been underway for months, he urged Congress to formally authorize the use of force.

And on Cuba, he defended his recent decision to push for normalizing relations with the country. Despite concerns among some lawmakers in Congress that the Castro regime may exploit the opening to its advantage, Obama urged Congress to “begin the work of ending the embargo.”

The speech was Obama’s first State of the Union before a Congress controlled by Republicans. The party won control of the Senate and built a historic majority in the House in November.

Yet Obama has made clear he plans to play “offense” in his final two years, and his speech Tuesday set the stage for that political and legislative battle.

Both Republicans and Democrats are appealing to middle-class voters as they begin the new Congress. But Obama’s State of the Union address, thematically, promoted federal government protections and programs as key to their security, where Republicans are making a flat pitch for private-sector job creation.

Earlier in the day, Senate Majority Leader Mitch McConnell urged the president to look beyond “more tired tax hikes,” and instead strive for “responsible reforms that aim to balance the budget.”

He also sounded a middle-class message, but urged the president to boost workers with bipartisan jobs bills, including by backing efforts to approve the Keystone XL pipeline.

Sen. Joni Ernst, R-Iowa, who was elected in November to an open Iowa seat, delivered the official Republican response to Obama Tuesday night. The senator presented a markedly different picture of the economy, where Americans “agonize over stagnant wages and lost jobs.”

On the tax front, Ernst called for simplifying America’s “outdated and loophole-ridden tax code” – not to finance more spending but improve the economy.

“So let’s iron out loopholes to lower rates — and create jobs, not pay for more government spending,” she said. “The president has already expressed some support for these kinds of ideas. We’re calling on him now to cooperate to pass them.”