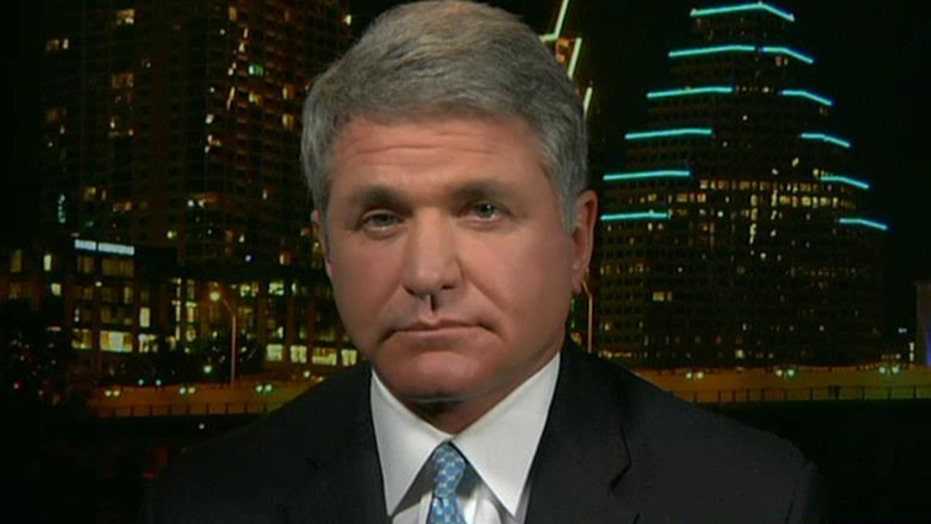 McCaul: ‘This is a very dangerous and reckless policy’

An Obama administration plan to allow Syrian refuges into the United States is raising concerns within the intelligence community and on Capitol Hill -- with one GOP House leader calling it a “federally sanctioned welcome party” to potential terrorists.

The State Department has defended the plan to welcome refugees from the war-ravaged western Asia country, saying the U.S. was founded on the principles of helping such people.

However, House Republicans are concern about members of The Islamic State, whose de facto headquarters is in Syria, infiltrating the refugee system and getting on American soil.

Mike McCaul, chairman of the House Committee on Homeland Security, said Friday night on Fox News’ “Hannity” show that the policy is “dangerous and reckless.”

The Texas lawmaker said he also recently wrote National Security Adviser Susan Rice about the policy, which includes brining in refugees from neighboring Turkey, where millions of Syrians have fled because of their civil war.

In the letter, he and fellow Republicans raised concerns about the U.S.’s screening process, which is hindered by the intelligence-gathering challenges in Syria.

"You have to have information to vet,” FBI Assistant Director Michael Steinbach, said in a Feb. 11 House homeland security hearing. “Databases don't [have] the information on those individuals, and that's the concern.”

McCaul suggested at the hearing that allowing Syrian refugees into the U.S. would be a “huge mistake.”

“Most of (the refugees) are women and children, but there are male actors that concern me,” he said. “This would be a federally sanctioned welcome party, if you will, to potential terrorists in the United States.”

An estimated 7 million Syrians are seeking refugee status, and 500 have reportedly already been allowed into the U.S.

"It's clearly a population of concern," Nicholas Rasmussen, the director of the National Counterterrorism Center, said at the hearing.

Said Steinbach: "I'm concerned. We'll have to take a look at those (terror watch) lists and go through all of the intelligence holdings and be very careful to try and identify connections to foreign terrorist groups."

Steinbach and Rasmussen were joined at the hearing by Francis Taylor, who runs the Department of Homeland Security’s intelligence office.

Taylor acknowledged his agency was concerned about any group that might be coming to the U.S. for “nefarious purposes.” However, he said he was “not in a position” to agree or disagree with the refugee policy because it was under the offices of the secretary of State.

The State Department did not send a witness to the hearing. But Larry Bartlett, an agency director for refugee admission, told ABC News that the vetting process is "intensive," deliberate and includes information and guidance from the Defense Department and other U.S. intelligence agencies.

"We have a very slow process of moving refugees through our pipeline, and part of it is because of the security vetting component," he said.

Despite the concerns of Rasmussen and the others who testified, they vowed that the screen process would be as rigorous as possible.

"Any tasking we're given ... will be as thorough as we can make it," Taylor said.