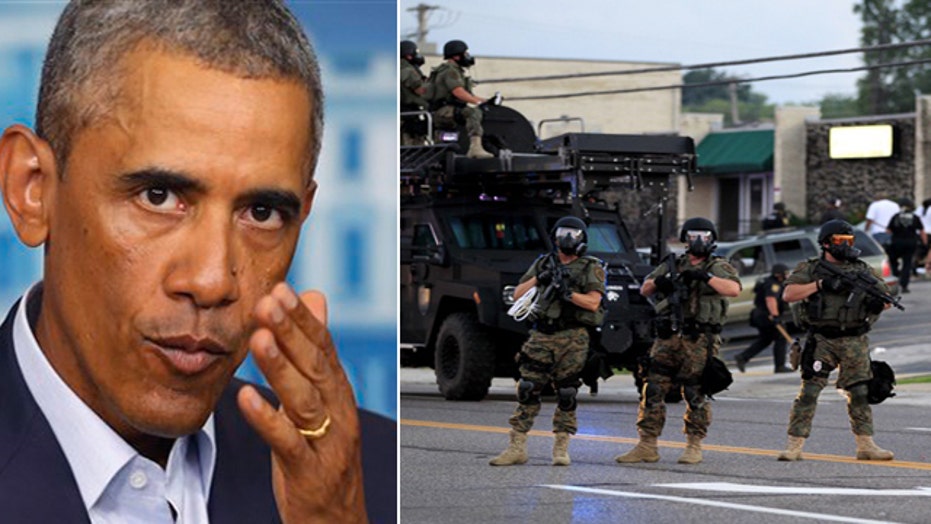 The review will include whether the programs are appropriate, if the agencies are getting enough training and guidance to use the equipment and whether the federal government is sufficiently auditing the use of the equipment.

The president hinted Monday that a review was likely in the aftermath of an unarmed Ferguson, Mo., teen being fatally shot by a police officer, which was followed by local law enforcement using military equipment to try to control the ensuing protests and riots.

“I think it's probably useful for us to review how the funding has gone, how local law enforcement has used grant dollars, to make sure that what they’re purchasing is stuff that they actually need, because there is a big difference between our military and our local law enforcement and we don't want those lines blurred,” Obama said. “And I think that there will be some bipartisan interest in reexamining some of those programs.”

The August 9 incident in which 18-year-old Michael Brown was fatally shot by the officer and the local police later using automatic rifles and tank-like vehicles to control crowds was not the first time the issue about local police using military equipment has been raised.

An Associated Press investigation last year found that a large share of the $4.2 billion in surplus military gear distributed through the 24-year-old program went to police and sheriff’s departments in rural areas with few officers and little crime.

On Tuesday, Rear Adm. John Kirby, the Defense Department's chief spokesman, said the program has not been allowed to “run amok.”

The program was created by Congress in 1990 to allow local police to apply for the excess equipment. However, the transfers reportedly have increased as the United States winds down its wars in Iraq and Afghanistan.

The Defense Logistics Agency took over the program in 1997.

“We don’t push equipment on anybody,” Kirby continued. “This is excess equipment the taxpayers have paid for and we're not using anymore. And it is made available to law enforcement agencies, if they want it and if they qualify for it. … Just because they ask for a helicopter doesn’t mean that they get a helicopter."

Rep. Hank Johnson, D-Ga., is among the members of Congress who plan to address the issue following August recess.

Johnson, a member of the House Armed Services Committee, wants to introduce legislation to curb what he describes as an increasing militarization of police agencies across the country.

The president’s review will be led by White House staff including the Domestic Policy Council, the National Security Council, the Office of Management and Budget and relevant U.S. agencies -- including the departments of Defense, Homeland Security, Justice and Treasury, in coordination with Congress, the administration official also said Saturday.