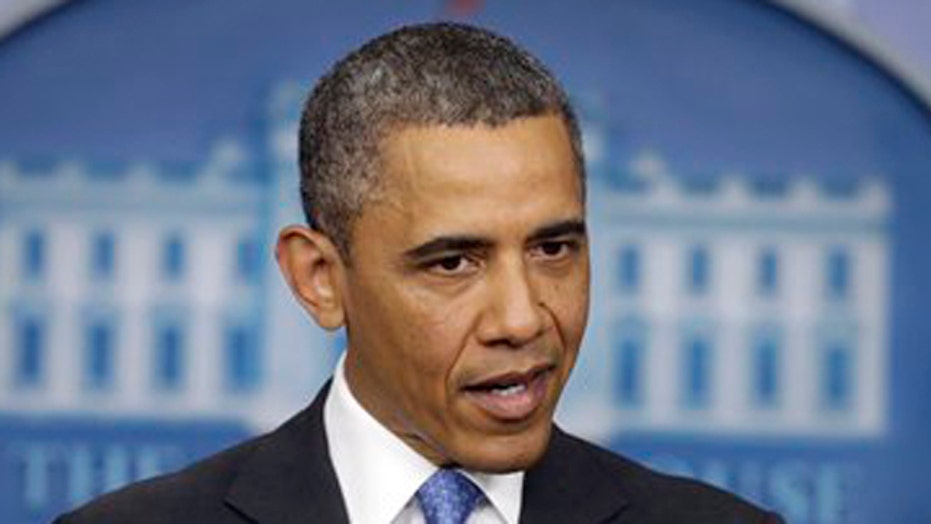 Fight over Obamacare enters new phase and another Benghazi standoff. Plus - How does President Obama plan to get his agenda through Congress?

“For the 85 to 90 percent of Americans who already have health insurance, this thing has already happened.  And their only impact is that their insurance is stronger, better, more secure than it was before.  Full stop.  That’s it.  They don’t have to worry about anything else.”

-- President Obama at a press conference

President Obama had some gnarly news for the Democratic campaign committees: This is as good as it gets for his signature health law.

In a press conference on the 100th day of his second term, Obama found himself on the defensive and short on answers. Syria genocide? We’re looking into it. Benhgazi whistleblowers? Never heard of them. Intelligence gaps on the Boston Marathon bombing? “This is hard stuff.”

Presidents usually don’t have press conferences unless they have something they want to say, especially Obama who much prefers batting practice to swinging at fastballs when it comes to media queries.

So why did insular Obama step to the podium on Tuesday if he didn’t have more definitive answers to the pile of policy and political questions reporters would surely lay at his feet? Had he wanted to push a topic, Obama might have just beckoned Steve Kroft or Matt Lauer back to the White House.

The reason for the press conference instead seemed to be for Obama to assert that despite a string of defeats, he is still relevant. Having been twice brushed back by Senate Democrats and with his second-term agenda looking like a dead letter, Obama wanted to show he was still the man.

The best way to show the Washington press corps that a president is a lame duck is to claim that he isn’t one. The way to avoid lame duckatude is to pass things and do things. Obama would have been better off to wait for a win of some kind before claiming he still had his clout.

One of the big challenges to Obama’s stature is the growing discontentment over the implementation of his 2010 health law. Democrats who got spanked in that year’s Midterm Elections are worried about a repeat performance in 2014 as the most unpopular provisions of the law go into place.

Even Democrats who helped build the bill are pointing their fingers at the administration, saying that the chaotic implementation of the law and its ongoing unpopularity are the fault of the president and his team. And calling the implementation a “train wreck” is kind compared to what Democrats say about the law behind closed doors.

In their bid to hold the Senate and decrease their deficit in the House, Democrats are not keen to be talking about the costs, taxes and insurance disruptions attendant to the law the president now calls “Obamacare.”

Asked about those concerns and the continued unpopularity of the law, Obama explained that people did not understand. He argued that the 85 percent to 90 percent of Americans who have insurance have already been helped by the law in the form of greater security. For the 10 percent or 15 percent without insurance, help was on the way.

But of the insured majority, relatively few have seen positive effects from the law. For 26-year-olds still on their parents insurance and those with catastrophic illnesses, yes. For the overwhelming majority, though, the only thing they have seen is higher premiums and warnings of increased costs and potentially lost coverage to come.

Think of it this way: Obama says the law has already done everything it will do to benefit some 280 million Americans, but the Obamacare boosters at the Kaiser Family Foundation say that 42 percent of Americans are unaware that Obamacare is still law.

If the supposedly best, most popular parts of the law have been in place for years and four in 10 adults don’t even believe “Obamacare” still exists, does that suggest it is going to become more popular or less popular?

In a FOX News poll out today, a sturdy, substantial majority still want the law repealed. And get this: 71 percent of all voters, including 56 percent of Democrats, said the regulations in the law are “way over the top.”

If this is as good as it gets for 280 million Americans, Democrats and the law are in big, big trouble.

Obama was helped to re-election by eating dessert first when it came to his health law, and now he expects his fellow Democrats to eat their peas in 2014. This marks the second time that the president has left legumes for his party, but Democrats may not be so willing to swallow as they were in 2010.

If the law’s unpopularity increases, endangered Democrats will distance themselves from the law and join the chorus of critics. If that happens, the chances of delay, major alteration or eventual repeal of the law increase dramatically.

“Chain of custody?  What is this, "CSI Damascus?”  In the middle of a war you expect a chain of custody in deciding if a weapon was used?”