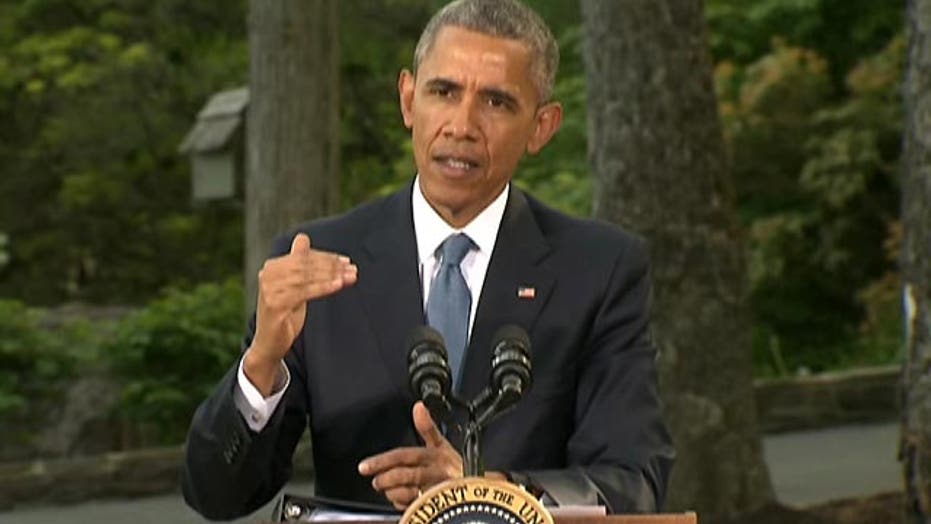 President Obama does not appear to be drawing any more red lines with Syria’s Bashar Assad amid allegations that his regime has returned to using chemical weapons.

The president was asked about the allegations at a press conference Thursday, at the close of a Camp David summit with Arab allies.

Obama said the U.S. is working with international partners to investigate if the Syrian president’s government is dropping chlorine bombs, as alleged.

If it is, he said, the U.S. will cooperate with international monitors and Assad's patrons, like Russia, "to put a stop to it."

The tone was a sharp departure from when he vowed “enormous consequences” for Assad in 2012 if chemical weapons were used, and drew a so-called red line on the issue. A year later, Obama decided not to order a military response despite evidence the weapons were used. Instead, he struck a deal with Russia for Assad to relinquish his chemical arsenal.

On Thursday, Obama asserted that it has been verified that the regime already gave up its chemical weapons.

However, chlorine gas – which Assad’s government is now accused of using -- was not a part of that agreement. Obama gave a nuanced response Thursday, noting that chlorine isn't an internationally banned chemical weapon.

However, he said, “when it is used in this fashion, [it] can be considered a prohibited use of that particular chemical. And so we're working with the international community to investigate that.”

Last week, others in Obama’s administration called for an immediate U.N. investigation into the "abhorrent acts" – without saying what, if any, punishment Assad might face if formally blamed for the string of alleged chlorine gas attacks.

"There is mounting evidence of repeated chlorine attacks," the diplomat said.

Civilians, including children, allegedly have been injured and killed in the latest attacks. In a letter sent last week to the U.N. Security Council from the National Coalition of Syrian Revolution and Opposition Forces, the group cited reports of chlorine gas attacks in the Idlib and Hama areas and urged the creation of a no-fly zone to protect the Syrian people.

"In the past two weeks alone, witnesses and medics on the ground in Idlib and Hama governorates reported at least nine separate instances of toxic chemical attacks -- several of them deadly," the group wrote. "... in each instance, barrel bombs loaded with poisonous chemical substances were deployed from Syrian regime helicopters."

The U.S. has submitted a preliminary draft Security Council resolution that aims to set up a mechanism for determining who is to blame and to hold them accountable.

A U.S. official told Fox News the Security Council is overdue in addressing "the need to determine who is responsible" for the attacks. "Doing so is critical to getting justice for the Syrian people," he said.