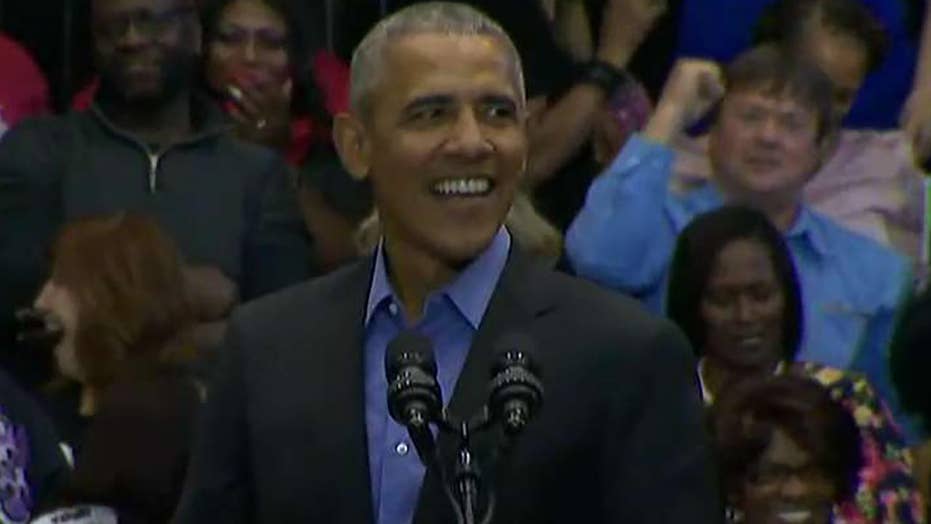 Obama: Character of our country is on the ballot

Former President Barack Obama made his closing arguments against the Trump-led Republican Party in a fiery campaign push that stretched into Monday – capping an extraordinary political intervention that saw him crisscross the nation stumping for favored candidates.

The president popped into a northern Virginia campaign office Monday for Virginia Sen. Tim Kaine, to support not only the front-running Senate incumbent but Democratic state Sen. Jennifer Wexton, who's in one of the biggest House battles this year against endangered Republican Rep. Barbara Comstock.

It was a low-key finish to an otherwise high-profile campaign swing that broke with the tradition of most past presidents largely refraining from blasting their predecessors' agenda on the trail. Obama railed against President Trump and congressional Republicans throughout his stops, accusing them of using “political stunts” to rally support.

Friday's remarks in Miami were among the most fiery, as Obama mocked the Clinton email controversy of 2016 and blasted Republicans warning about the approaching migrant caravan.

“In 2014 they said Ebola is going to kill all of us, shut the borders. In 2016, it was Hillary’s emails. They were all wound up about that,” Obama said during a stop in Miami to stump for Sen. Bill Nelson, D-Fla., and Florida Democratic gubernatorial candidate Andrew Gillum. Nelson is fighting a tough reelection campaign against Florida’s Republican Gov. Rick Scott, while Gillum is locked in a tight battle with former Florida Rep. Ron DeSantis.

Obama added: “Now in 2018 they’re telling you the existential threat to America is a bunch of poor refugees a thousand miles away. They’re even taking our brave troops away from their families for a political stunt at the border.”

The former president also said that Tuesday’s midterms “might be the most important election of our lifetimes.”

“Politicians will always say that,” Obama said. “But this time it’s actually true. The stakes really are that high. The consequences of any other staying home really are more dangerous.”

Just as Trump and Republicans have made the caravan of Central American migrants making their way through Mexico a central talking point in the closing days of this election season, so did Obama.

"Don't be hoodwinked. Don't be bamboozled. Don't let them run the okey-doke on you," Obama said Sunday during a campaign stop in Gary, Ind., for Democratic incumbent Sen. Joe Donnelly.

"Because while they are trying to distract you with all this stuff, they are robbing you blind," Obama added. "They'll be like: 'Look, look, look! Caravan, caravan!' Then they're giving tax cuts to their billionaire friends. 'Look, look, look! Whatever is the thing scary.' And then they're sabotaging your health care. You can't fall for it."

Obama over the weekend also campaigned in his hometown of Chicago for businessman J.B. Pritzker, the Democrats’ nominee for Illinois governor in his race against Republican Gov. Bruce Rauner. It’s been a battle of wealthy titans spending their way through potentially the costliest gubernatorial campaign in U.S. history.

The former president also brought up Trump’s claim that he would “drain the swamp” and compared the legal problems of his administration with those of the current White House.

“They’ve racked up enough indictments to field a football team. No one in my administration got indicted,” he said of the Trump administration.

The current and former presidents crossed paths over the weekend in both Florida and Georgia, where Obama hoped to help Stacey Abrams become the first African-American woman elected as governor in the U.S.

Obama lambasted the Republican gubernatorial nominee, Georgia Secretary of State Brian Kemp, for his record on voting rights, while praising Abrams as the "most experienced, most qualified candidate in this race."

"How can you actively try to prevent the citizens from your state from exercising their most basic right?" Obama said of Kemp, before turning to Abrams: "She is the most experienced, most qualified candidate in this."