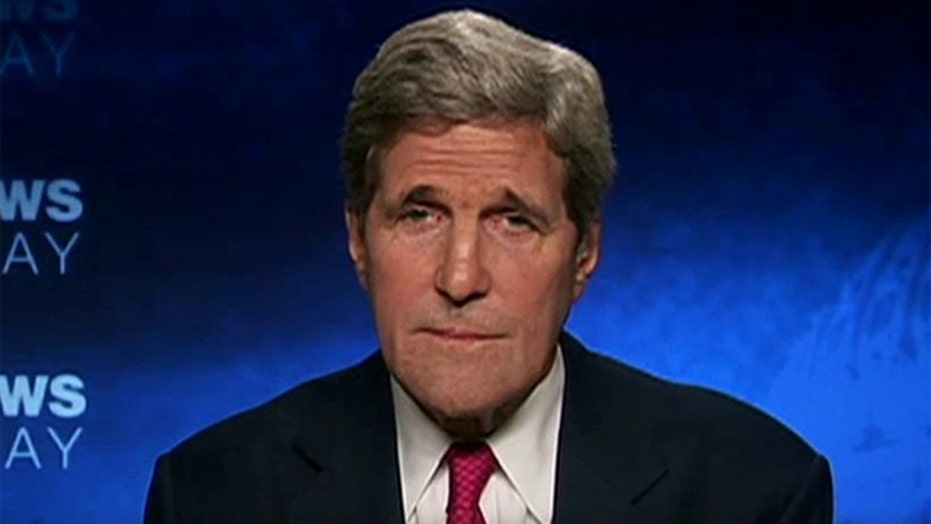 Secretary of State reacts to crises around the world

President Obama and his top diplomat gave continued support Sunday to Israel in its conflict with militant group Hamas but expressed heighten concerns about the rising death toll in the weeks-long battle.

Obama spoke by phone with Israeli Prime Minister Benjamin Netanyahu amid escalating violence that has killed at least 425 Palestinians and 20 Israelis, as Secretary of State John Kerry prepares to go to Egypt to press for a cease-fire between Hamas and Israel.

Hamas' armed wing, the Al-Qassam Brigades, also claimed Sunday that it had captured an Israeli soldier. An Israeli military spokeswoman told the Washington Post that the country’s army is investigating the claim.

U.N. chief Ban Ki-moon called Israel's latest incursion "atrocious," and said it must do far more to protect civilians. The U.N. Security Council was holding an emergency session Sunday night at the request of council member Jordan on the situation in Gaza.

Hamas already has rejected a cease-fire proposed by Egypt, supported by Netanyahu, and is looking instead to governments in Qatar and Turkey for an alternative proposal.

Those countries have ties to the Muslim Brotherhood, which is also linked to Hamas but banned in Egypt.

The conflict started roughly two weeks ago, after three Israeli youths were abducted and killed.

Israelis blamed Hamas-backed Palestinians. And the teens’ deaths were followed almost immediately by what authorities suspect was a retribution attack on a Palestinian youth who was strangled, beaten and burned to death.

The killings prompted rocket attacks by both sides and Israeli ground forces going into the Gaza Strip.

Kerry speaking on “Fox News Sunday” declined to answer a question about whether Israel has gone too far, saying essentially “it's very difficult in these situations.” But he defended Israel’s right to “go in and take out” a network of tunnels from which Hamas is allegedly attempting to use to kidnap Israelis.

The White House said Obama’s call to Netanyahu on Sunday was their second in three days to discuss the situation in Gaza.

The president also talked about Israel’s military operation, reiterated the United States’ condemnation of attacks by Hamas and reaffirmed Israel’s right to defend itself.

But the president “also raised serious concern about the growing number of casualties, including increasing Palestinian civilian deaths in Gaza and the loss of Israeli soldiers,” the White House said.

Kerry is scheduled to go to Egypt’s capital city of Cairo to seek an end to the fighting, based on a November 2012 cease-fire agreement.

He also said Sunday that any agreement must be without conditions or "any rewards for terrorist behavior."

The U.N. relief agency in Gaza estimates that 70,000 Palestinians have fled their homes amid Israel's military offensive and more than 1,000 homes in Gaza have been destroyed or damaged beyond repair.

Netanyahu said on ABC's "This Week," that Israel has tried to avoid killing Palestinian civilians through phone calls, text messages and leaflets dropped on their communities.

But Hamas doesn't "give a whit about the Palestinians," Netanyahu said. "All they want is more and more civilian deaths."

The prime minister said his top goal is to restore a sustainable peace, but then will ask the international community to consider demilitarizing Gaza to rid Hamas of its rockets and shut down the tunnels leading into Israel.

Tensions between Israel and Palestinian authorities have been simmering for years. They threatened to boil over this spring when Israel shelved nearly nine months of peace negotiations that were being personally shepherded by Kerry after Palestinian President Mahmoud Abbas agreed to create a unity government with Hamas.