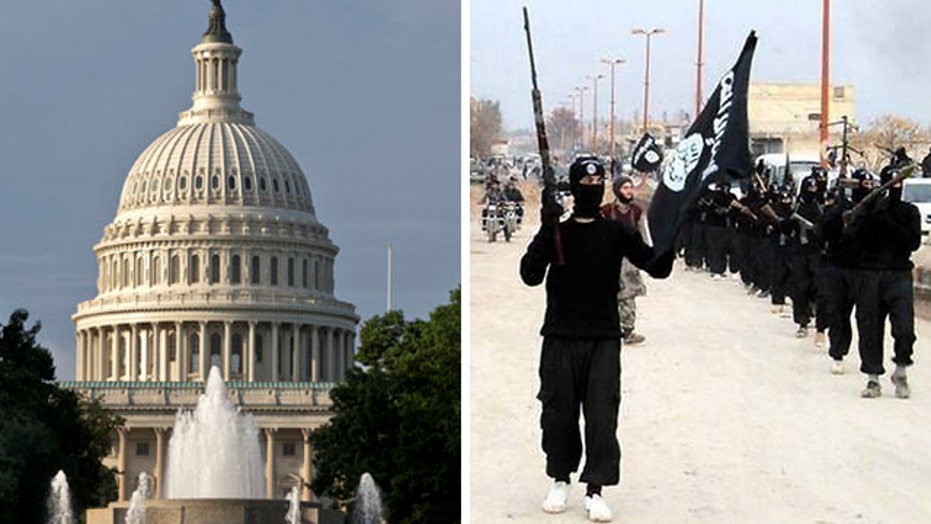 President Obama huddled with congressional leaders Tuesday to build support for his administration's campaign against the Islamic State, as he prepares for a high-stakes prime-time address where he's under pressure to lay out a clear strategy.

The president plans to deliver his address at 9 p.m. ET on Wednesday from the State Floor of the White House.

Ahead of the speech, Obama met for nearly two hours with the top four congressional leaders on the threat posed by the group also known as ISIS and ISIL. The lawmakers left the meeting without speaking to the media.

However, a White House statement released after the session made it clear the president would not be asking for a congressional vote to authorize military force. "The president told the leaders that he has the authority he needs to take action against ISIL in accordance with the mission he will lay out in his address tomorrow night," the statement said in part. It added that he would "welcome" congressional support.

The statement also described the talks as "productive" and said the leaders "expressed their support for efforts to degrade and ultimately destroy ISIL."

House Speaker John Boehner, R-Ohio, told Obama he would support him if he chose to deploy the military to help train and play an advisory role for the Iraqi Security Forces and assist with lethal targeting of ISIL leadership, according to a Boehner aide.

Earlier in the day, GOP leaders pressed the president to explain his strategy, which they say is lacking. “We have a very serious problem and what we need is a strategy,” Boehner said.

The White House says Obama on Wednesday will discuss the threat posed by the Islamic State militants and a strategy for "degrading and ultimately destroying" the group.

Prime-time addresses typically are reserved for major announcements, and the president has in the past used them to discuss everything from the drawdown of forces in Afghanistan to – one year ago tomorrow – the use of chemical weapons in Syria.

Obama has set a high bar in scheduling such an address for outlining his ISIS plans.

In advance of the speech, he’s facing pressure from lawmakers on all sides, most of whom want the U.S. to aggressively counter the Islamic State but diverge on how to do it and whether Congress needs to take a formal vote.

"I think we need to be going after the terrorist threat wherever it is and anyone who thinks this is just an Iraq-Syria issue is not paying much attention to what's happening around the world," Boehner told reporters after a House Republican caucus meeting with former Vice President Dick Cheney.

Officials have said the president is seeking "buy-in" from lawmakers but they have not specified whether Obama will seek an authorization for use of force.

The U.S. is already launching airstrikes against militants in Iraq, actions taken at the invitation of the Iraqi government and without congressional authorization.

Boehner said Tuesday that no decision would be made on whether Congress votes until Obama lays out his plan. There is no consensus in Congress on whether Obama needs new authorization to attack the militants. Some lawmakers say the president has the authority under the Constitution and no new vote is necessary. Others are reluctant to vote weeks before midterm elections.

Despite the disagreements, Republicans have seized on Obama's concession last month that the administration had no strategy, with Senate Minority Leader Mitch McConnell using that statement in a campaign ad.

In a speech on the Senate floor, McConnell set the parameters for Obama, saying the president needs to identify military objectives and explain how they will be accomplished.

"He needs to present this plan to the Congress and the American people, and where the president believes he lacks authority to execute such a strategy, he needs to explain to the Congress how additional authority for the use of force will protect America," McConnell said. "The threat from ISIL is real and it's growing. It's time for President Obama to exercise some leadership in launching a response." ISIL is an alternative name for the militants.

In the House GOP meeting, Cheney stressed the importance of American leadership in the world to a Republican caucus that's split between hawks and tea partiers.

"His message primarily was that he sees the pattern of this president leading to a less safe world and a much more problematic relationship with our historic allies, whether they're in the Middle East or Europe," Rep. Darrell Issa, R-Calif., said.

Rep. Adam Kinzinger, R-Ill., said he saw no legal need for Obama to seek congressional approval for military action at all.

"He already has the authorization," he told reporters. "But I think if he chooses to come to Congress, I think it will pass overwhelmingly and it may be to his benefit."

Kinzinger said Obama had options, from seeking lawmakers' blessing for a specific use of force, amending his current authorization or simply asking for money to be appropriated for an ongoing battle.

"The big thing is to make sure that he follows up those words with action," Kinzinger said. "That's been an area that's been lacking lately."