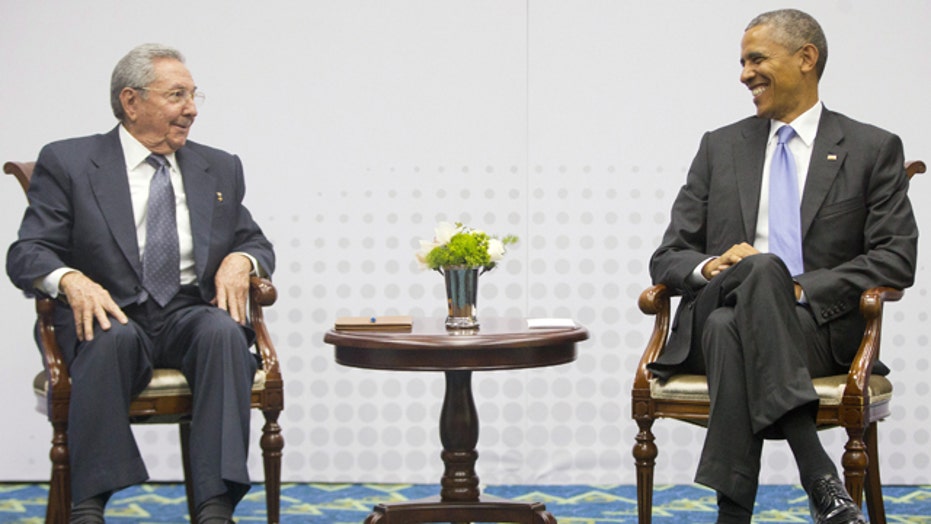 President Obama held a historic formal meeting with Cuban President Raul Castro Saturday, the first between US and Cuban leaders in over half a century, pledging to 'turn the page' and develop a new relationship between the two countries.

The two leaders shook hands Friday at the start of the summit and met Saturday on the sidelines of the a Panama City convention center.

Obama and Castro met for about an hour, with Obama telling reporters before the meeting that, after 50 years of unchanged policy, it was time to try something new and to engage with both Cuba's government and its people.

"What we have both concluded is that we can disagree with a spirit of respect and civility," Obama said. "And over time, it is possible for us to turn the page and develop a new relationship between our two countries."

Obama thanked Castro "for the spirit of openness and courtesy that he has shown during our interactions" and pledged to do whatever he could to "make sure that the people of Cuba are able to prosper and live in freedom and security."

Castro, for his part, said he agreed with everything Obama had said. However, he added the caveat that they had "agreed to disagree" at times. Castro said he had told the Americans that Cuba was willing to discuss issues such as human rights and freedom of the press, maintaining that "everything can be on the table."

"We are disposed to talk about everything -- with patience," Castro said in Spanish. "Some things we will agree with, and others we won't."

Not since 1958 have a U.S. and Cuban leader convened a substantial meeting. Dwight Eisenhower and Fulgencio Batista met that year, and the following year, former Cuban President Fidel Castro met with Richard Nixon, who was vice president at the time.

The flurry of diplomacy was aimed at injecting fresh momentum into their months-old plan to restore normal relations between their countries.

The historic gathering played out on the sidelines of the Summit of the Americas, which this year included Cuba for the first time. Although the meeting wasn't publicly announced in advance, White House aides had suggested the two leaders were looking for an opportunity to meet while in Panama and to discuss the ongoing efforts to open embassies in Havana and Washington, among other issues.

Obama had pledged earlier on Saturday not to refight the battles of the Cold War.

"The Cold War has been over for a long time," Obama said at the summit. "And I'm not interested in having battles frankly that started before I was born."

Castro later rallied to Obama’s defense, absolving the president of fault for the U.S. blockade in a stunning reversal of more than 50 years of animosity between the United States and Cuba.

"In my opinion, President Obama is an honest man," Castro said -- a remarkable vote of confidence from the Cuban leader, who praised Obama's life and his "humble background."

Although earlier in the week Obama suggested a decision to remove Cuba from the list was imminent, he declined to take that step Saturday, citing the need to study a recently completed State Department review.

Removal from the terror list is a top priority for Castro because it would not only purge a stain on Cuba's pride, but also ease its ability to conduct simple financial transactions. Castro said Cuba should never have been on the list in the first place.

"Yes, we have conducted solidarity with other peoples that could be considered terrorism -- when we were cornered, when we were strongly harassed," he said. "We had no other choice but to give up or to fight back."

The U.S. long ago stopped accusing Cuba of conducting terrorism, and Obama has signaled that he's ready to take Cuba off the list. Earlier in the week he suggested an announcement was imminent when he revealed that the State Department had completed its lengthy review of the designation.

Yet Obama's delay in delisting Cuba comes as the U.S. seeks concessions of its own -- namely, the easing of restrictions on American diplomats' freedom of movement in Havana and better human rights protections. Obama said the U.S. would continue pressing Cuba on human rights even as he called for Congress to lift the economic embargo on the island nation 90 miles to the south of Florida

In January, the Obama administration began to chip away at the U.S. embargo against Cuba, announcing new changes taking effect Friday that will allow more trade and travel between the two countries.

The changes were announced despite concerns from members of Congress that the landmark shift in U.S.-Cuba relations is a "one-sided deal" that will benefit the Castro regime.

And they have since been questioned by the only two official Republican candidates for president in 2016 – Sens. Ted Cruz, Texas, and Rand Paul, Kentucky.

At a recent summit in California sponsored by the Koch brothers-backed Freedom Partners, Paul argued that a half-century of economic embargoes have failed to remove leaders Fidel and Raul Castro.

“The Castro brothers are brutal dictators,” responded Cruz, a Cuban-American.

Castro, on Saturday, in a meandering, nearly hour-long speech to the summit, ran through an exhaustive history of perceived Cuban grievances against the U.S. dating back more than a century -- a vivid display of how raw passions remain over American attempts to undermine Cuba's government.

Then, in an abrupt about face, he apologized for letting his emotions get the best of him. He said many U.S. presidents were at fault for that troubled history -- but that Obama isn't one of them.

"I have told President Obama that I get very emotional talking about the revolution," Castro said through a translator, noting that Obama wasn't even born when the U.S. began sanctioning the island nation. "I apologize to him because President Obama had no responsibility for this."

Yet the optimistic tone from the president wasn't enough to offset the skepticism of some Latin American leaders about U.S. intentions in the region, including many who have sharply criticized recent U.S. sanctions against Venezuelan officials.

Even President Dilma Rousseff of Brazil, whose country is a close U.S. partner, told the summit that such unilateral policies of isolation are always counterproductive and ineffective. "For that reason we reject the adoption of sanctions against Venezuela," she said.